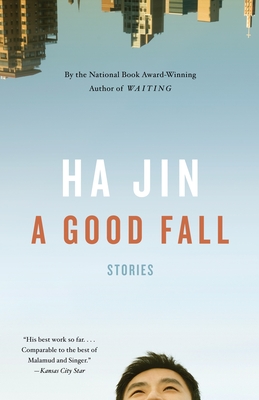 “Ha Jin never fails to amaze. His newest work, a collection of short stories, focuses on individuals who struggle to reconcile their cultural identities with their new and disparate surroundings. A Good Fall is at times tragic, at others humorous, yet persistently enchanting.”
— Bridget Allison, Phoenix Books, Essex, VT
View the List

In his first book of stories since The Bridegroom, National Book Award-winning author Ha Jin gives us a collection that delves into the experience of Chinese immigrants in America.

A lonely composer takes comfort in the antics of his girlfriend's parakeet; young children decide to change their names so they might sound more "American," unaware of how deeply this will hurt their grandparents; a Chinese professor of English attempts to defect with the help of a reluctant former student. All of Ha Jin's characters struggle to remain loyal to their homeland and its traditions while also exploring the freedom that life in a new country offers.

Stark, deeply moving, acutely insightful, and often strikingly humorous, A Good Fall reminds us once again of the storytelling prowess of this superb writer.

“His best work so far. . . . Comparable to the best of Malamud and Singer.” —Kansas City Star

“Captivating. . . . Ha Jin captures a new, growing slice of America. . . . The storyteller’s art is richly on display here. Ha Jin has a singular talent for snaring a reader. His premises are gripping, his emotional bedrock hard and true.” —The Washington Post

“Engaging,. . . . Funny and tender at the same time. . . . The stories in this collection deal with what all good stories deal with: love, death, freedom and hope.” —The Dallas Morning News

“Quiet, careful, restrained prose—prose whose absence of flourish can, at times, make it all the more eloquent.” —The New York Times Book Review

“Skillful and deeply felt. . . . The collection as a whole celebrate[s] immigrant resilience: the courage to embrace calamity, hit the pavement and keep walking toward a brighter future.” —The Los Angeles Times

“[Jin] writes with warmth and humor about what it means to be a bewildered stranger in a strange land, no matter where one is born.” —People Magazine

“Engrossing, visceral. . . . All [stories] come across with the straightforward declarative immediacy of a videotaped interview or testimonial. . . . [An] illuminating, well-integrated collection.” —The Christian Science Monitor

“[A] fine collection. . . . Jin is a master of the straightforward line . . . . [and] a significant American writer. . . . As in Chekhov's late work, his writing covers a lot of ground quickly.” —The New Republic

“A collection of sublime moments. . . . With moments of stark insight. . . . A message worth hearing.” —The Denver Post

“Every story . . . offer[s] evocative snapshots of the lives of contemporary first-generation Chinese immigrants. . . . [They] will take up quiet residence in your consciousness, shining a light into lives that too often go unseen.” —The Boston Globe

“Included are the rich imagery, attention to detail, and wry humor that are Jin’s stock in trade and that, when taken together, offer—as fellow writer Francine Prose has noted—‘a compelling exploration of the . . . terrain that is the human heart.’” —Fredericksburg Free Lance-Star

“[Jin’s] unvarnished prose adds a no-nonsense charm to the stories. . . . He just leans on simple phrasing that could come out of Sherwood Anderson or Ernest Hemingway. . . . Jin’s approach is the more honest one, and the one more likely to endure.” —Chicago Sun-Times

“Ha Jin’s new book of stories rises way above the ordinary or merely good. . . . The embarrassments and jokes and adulteries and frustrations of these characters in their little prosaic spaces convey the sense of how each human being is like and unlike all others.” —New York Post

“This may be Ha Jin’s best work yet, his stories often ascending to the mystical penumbra we expect of singer, Malamud, or O’Connor. . . . Ha Jin is equally good as a novelist and a short story writer. . . . Stories still allow him to get to the heart of the matter in a more piercing manner.” —The Huffington Post

“Jin writes with a twinkle in his eye.” —Cleveland Plain Dealer

“The understated clashes of culture [in A Good Fall] reveal careful thematic design and provide an almost 360-degree view of this select human experience: The concerns of people everywhere trying to make a better life come alive, one deceptively simple story at a time.” —The Miami Herald

“[Jin’s] work is shot through with a sense of isolation, melancholy and sacrifice: what it means—and costs—to be different. . . . There is a seriousness present. . . . And there is occasional humor or at least irony.” —The Seattle Times

HA JIN left his native China in 1985 to attend Brandeis University. He is the author of five novels, three story collections, and three books of poetry. He has received the National Book Award, two PEN/Faulkner Awards, the PEN/Hemingway Award, the Asian American Literary Award, and the Flannery O'Connor Award for Short Fiction. Ha Jin lives in the Boston area and is a professor of English at Boston University.
Loading...
or
Not Currently Available for Direct Purchase