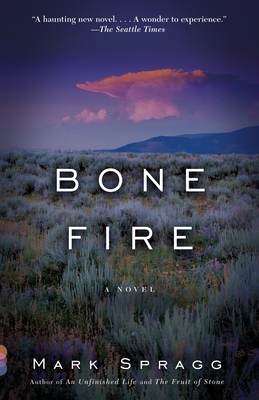 “Mark Spragg's writing is lyrical and wonderfully descriptive, and his characters come alive in this story, set in modern-day Wyoming. In ^Bone Fire^, we have the return of characters from Spragg's ^An Unfinished Life^ and a 10-year-old boy who will grab hold of your heart and never let go. This is writing and reading at its very best!”
— Susan Wasson, Bookworks, Albuquerque, NM
View the List

At eighty, Einar Gilkyson has lost his share of loved ones, but still finds his house full. His granddaughter, Griff, has dropped out of college to look after him, and his long-absent sister has returned home from Chicago. But Ishawooa, Wyoming is far from bucolic, and troubles begin to boil when the sheriff finds a man murdered in a meth lab. In this gripping story from the author of An Unfinished Life, harsh truths and difficult consolation come alongside moments of hilarity, surprise and beauty.

Mark Spragg is the author of Where Rivers Change Direction, a memoir that won the Mountains and Plains Booksellers Award, and the novels The Fruit of Stone and An Unfinished Life, which was chosen by the Rocky Mountain News as the Best Book of 2004. All three were top-ten Book Sense selections and have been translated into fifteen languages. He lives with his wife, Virginia, in Wyoming.


Praise For Bone Fire: A novel…

“[Bone Fire] once again lands us on the prairie-grass-covered ranchlands of Ishawooa, Wyoming, where locals know the roaming livestock, winding creeks and meandering constellations better than they know each other. . . . A wonder to experience.” —The Seattle Times

“A tale teeming with loss, redemption and personal crisis. . . . Spragg’s novel throbs with honest accounts of a Mountain West town . . . caught between past and present. . . . Bone Fire establishes as compelling a sense of time and place as any in contemporary fiction.” —The Denver Post

“Spragg conjures the West with style and gravity. He can burrow into the tightest chambers of the heart, and his belief in family is palpable and moving.” —The Boston Globe

“Beautiful. . . . Reading Bone Fire is probably a lot like spending some time with the folks in Wyoming: A serious pleasure.” —The Oregonian

“[Spragg] captures the unruly West, wrangles it onto the page somehow and holds it down with just the words.” —Los Angeles Times

“Bone Fire is that rare thing, a novel with all the literary virtues of skill and style and pitch that you hope for but also a book that makes you turn pages far into the night to find out what happens.” —Kent Haruf

“[A] big-sky slice of life. . . . As slow and shambling as a run-down pickup, but that allows the fine-tuned characters wide-open space to breathe and their grief to become palpable.” —Entertainment Weekly

“The strength of Bone Fire rests in Spragg’s ability to render lives in the contemporary American West with a keen eye for physical and emotional detail. Spragg understands how the landscape shapes the lives of the characters, as well as the way the modern world encroaches on the landscape. This is still the West of rodeos and pickup trucks, but it’s also the West of Google, Netflix, and GPS navigation.” —Kansas City Star

“It’s the author’s endearingly biting characters, not the slowly unpacking whodunit, that drives [Bone Fire]. You root for these people no matter how much dysfunction they leave in their wake, mostly because they’re always saying things you’d never have the guts to utter out loud.” —Outside

“[A] poignant modern Western. . . . Each member of [Spragg’s] cast is vibrant on the page, not because they resemble people one might know, but because they become intensely familiar and stay that way long after the book has been shelved.” —The Anniston Star

“Spragg is so spot on when it comes to describing small town life in the American West, his prose seems to leap off the printed page. . . . Spragg is a gifted writer.” —The Tucson Citizen

“A starkly beautiful portrait of the modern West.  Spragg is an author with a keen eye for both the poetic splendors and ugly realities of this much-romanticized country.” —The Globe and Mail (Canada)

“As Spragg’s story slowly unfolds and gradually picks up speed, his Wyoming is as tangible as his characters’ yearning for connection.” —Curled Up With A Good Book
“Spragg writes . . . with the smoothness of a river stone as he weaves a tale of loss and compassion, loyalty and family, and ultimately, love. . . . Sure to bring a lump to the throat.” —Las Vegas Review-Journal
“Mark Spragg writes about ordinary people extraordinarily well. . . . Emotionally charged and well-written, Bone Fire is truly an exceptional story, with a main character everyone can relate to.” —Sacramento News & Review