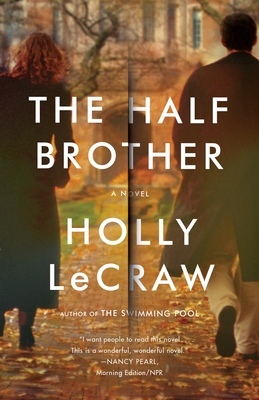 Charlie Garrett was never sure of his place during his Atlanta childhood. His dad died in Vietnam before he was born; he always felt like a guest in his stepfather’s wealthy family. It is only as a young teacher at the shabby-genteel Abbott School in Massachusetts that he can finally find himself. He begins his reinvention, falling in love with May Bankhead, the school chaplain’s beautiful daughter, and leading a charmed life—until he breaks both her heart and his own. May leaves Abbottsford, he thinks forever.

Nearly a decade later, the fragile peace that Charlie has built is shattered by the arrival of his golden-boy half brother—and the return of his first love. Trying to set things right, Charlie pushes his brother and May together, inadvertently creating a triangle of secrets, regrets, and desires, that threatens to consume them all.

Praise For The Half Brother…

“I want people to read this novel. . . . This is a wonderful, wonderful novel.”—Nancy Pearl,  Morning Edition, NPR

“LeCraw writes prose so shimmering and crafts a story that’s so profound, I swear I’d read her grocery list. About fracturing family bonds, unsettlingly powerful secrets and shape-shifting loyalties, The Half Brother is so gripping, so real that the pages virtually breathe.” —Caroline Leavitt, New York Times bestselling author of Pictures of You

“A gem of a literary page turner. . . . LeCraw’s writing is laced with insights that sweeten the reading like pieces of verbal candy.” —Providence Journal

“Heartbreaking. . . . Irresistible . . . It is a pleasure to get lost in LeCraw’s prose, which is both graceful and filled with smart observations.” —BookPage

“A family drama that reads like a Robert Frost poem.” --Elle Canada

“One of the finest school-set novels in recent memory. . . . LeCraw’s gorgeous sentences dramatize a campus where literature stirs young hearts and minds . . . [She] never eases the emotional tension.” —The Millions

“A love story steeped in a brew of scholarly romance resonant of Dead Poets Society and A Separate Peace.” —Winnipeg Free Press

"This is one of those books that slowly, methodically worked its way into my head and took root. . . . These characters deserve a little hope, and LeCraw gives it to them and us.” --Vox Libris


“A complicated, engrossing study of characters and relationships.” —Kirkus Reviews

“LeCraw’s gorgeous writing in The Half Brother brings to life scenes of true drama, where the stakes are the meaning of love, truth, and identity.  Her powerful ideas about what family gives—and takes away—will resonate long after you’ve finished.” —Bethanne Patrick, “The Book Maven”

“Exciting, insightful. . . .The tension that rests between the said and unsaid, and in the moment before the unknown becomes known, is electrifying.” —Necessary Fiction

“Holly LeCraw reveals the striking similarities between Southern gentry and New England elite in this novel about an Atlantan teaching at a Massachusetts boarding school. With lyrical prose and vivid sense of place, LeCraw tells a riveting story filled with deep, Gothic secrets. Above all, The Half Brother is a love letter to teaching and the power of literature.”—Lois Reitzes, host, City Lights, Atlanta NPR

“An engrossing and improbably fresh take on the boarding-school novel. Charlie Garrett’s search for identity is infused with a classical sense of hubris and fate, longing and passion, that rings startlingly true. This ambitious and provocative tale of how the stories we tell ourselves collide with family secrets will linger long after you turn the last page.” —Christopher Castellani, author of All This Talk of Love

“Radiant, elegiac, and spare. . . . LeCraw is an exceptionally gifted novelist, her prose is gorgeous and precise, shot through with stunning insight.” —Dawn Tripp, author of Game of Secrets and Georgia: A Novel of Georgia O’Keeffe

“A stirring, melancholy tale of families and the secrets they dare not share.” —Janice Y. K. Lee, author of The Piano Teacher

“LeCraw’s people are tender and they are ruthless—but mostly they are unforgettable. . . . The Half Brother is a memorable read you’ll want to share and discuss with your favorite literary companions right away.” —Robin Black, author of Life Drawing

Holly LeCraw is the author of The Swimming Pool. Her work has appeared in The Millions, Post Road, and various anthologies, and has been nominated for a Pushcart Prize. A native of Atlanta, she now lives outside Boston with her family.
Loading...
or
Not Currently Available for Direct Purchase