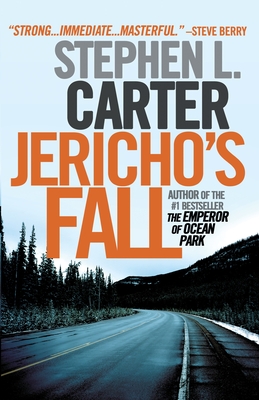 A riveting spy thriller, Jericho's Fall is the spellbinding story of a young woman running for her life from shadowy government forces.

In a secluded mountain retreat, Jericho Ainsley, former CIA director and former secretary of defense, is dying of cancer. To his bedside he has called Rebecca DeForde, a young, single mother, who was once his lover. Instead of simply bidding farewell, however, Ainsley imparts an explosive secret and DeForde finds herself thrown into a world of international intrigue, involving ex-CIA executives, local police, private investigators, and even a US senator. With no one to trust, DeForde is suddenly on the run, relying on her own wits and the lessons she learned from Ainsley to stay alive.

Stephen L. Carter is the William Nelson Cromwell Professor of Law at Yale University, and the author of seven nonfiction books. Jericho’s Fall is his fourth novel. He and his family live in Connecticut.

"An intense, beautifully written thriller that held me in its grip from the very first page to the last."--Christopher Reich

“Jericho's Fall is that rare thing: a page-turner that grips the readers' attention as they plunge into a vortex. . . . A thrilling roller coaster ride until the very last page. . . . Carter is a masterly novelist.”—San Francisco Chronicle

“An intricate spy thriller that proceeds at breakneck speed. . . . Graham Greene's readers, who savored [his] novels' unselfconscious erudition and matter-of-fact moral complexity, as well as their engaging plots, are likely to feel themselves on familiar ground here.”—Los Angeles Times

“A simmering page-turner about the murky underbelly of intelligence and finance that.”—Seattle Times

“Carter writes graceful prose, and he understands the mechanics of suspenseful storytelling.”—Washington Post

“One of those novels that people linger over and re-read simply for the experience and pleasure of analyzing how the author worked his magic. . . . Stephen Carter is possessed of a sharp and subtle wit. . . . This is the sharpest manifestation of his talent to date.”—Bookreporter
or
Buy Here
Copyright © 2020 American Booksellers Association