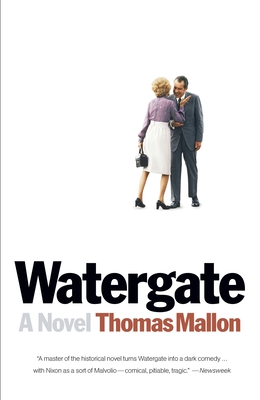 From one of our most esteemed historical novelists, a remarkable retelling of the Watergate scandal, as seen through a kaleidoscope of its colorful perpetrators and investigators.

For all the monumental documentation that Watergate generated—uncountable volumes of committee records, court transcripts, and memoirs—it falls at last to a novelist reconstruct some of the scandal’s greatest mysteries (who did erase those eighteen-and-a-half minutes of tape?) and to see this gaudy American catastrophe in its human entirety. In Watergate, Thomas Mallon conveys the drama and high comedy of the Nixon presidency through the urgent perspectives of seven characters we only thought we knew before now. Mallon achieves with Watergate a scope and historical intimacy that surpasses even what he attained in his previous novels, and turns a “third-rate burglary” into a tumultuous, first-rate entertainment.


Praise For Watergate: A Novel…

“A master of the historical novel turns Watergate into a dark comedy . . . with Nixon as a sort of Malvolio—comical, pitiable, tragic.”
—Newsweek

“With great aplomb, historical novelist Thomas Mallon reimagines the operatic drama of Watergate through the eyes of the gang-who-couldn’t-wiretap-right, filling in the blanks.”
—Vanity Fair

“Mallon writes with such wit and psychological acuity as he spins this carousel of characters caught in a scandal that’s constantly fracturing into new crises.”
—The Washington Post

“Historical fiction that unfolds with the urgency of a thriller . . . Mallon persuasively teases out the psychological drama of a story with a foregone conclusion.”
—The New Yorker

“We’re propelled forward and kept highly entertained by the colorful characters, the delicious insider details, the intelligence of the dialogue. . . . What Mallon captures particularly well is the fundamental weirdness and mystery at the center of the scandal. . . . It appears that Mallon’s primary goal, one he achieves with great finesse, is to make the portrayals of his characters as believable as possible.”
—New York Times Book Review

“In [Mallon’s] practiced hands—this is not his first fling at historical fiction—the festering mess of 1972-74 becomes almost fun, actually funny, and instructive about how history can be knocked sideways by small mediocrities. . . . Mallon uses his literary sensibility and mordant wit to give humanity to characters who in their confusions and delusions staggered across the national stage . . . let Mallon be your archaeologist, excavating a now distant past that reminds us that things could be very much worse. They once were.”
—George F. Will, The Washington Post

“Watergate is the sort of book that will ensnare you in its web of intrigue . . . Mallon manages to deftly capture the peculiar mix of unbridled ambition, bumbling ineptitude, hubris, cluelessness and dishonesty that sparked such an all-consuming crisis in American government.”
—NPR

“Mesmerizing . . . [Mallon’s] writing always soars far above that genre’s clichés. . . Like the best historical novelists, Mallon uses great public events as superstructure for classic themes of ambition and power, rivalry and envy, love lost and yearned for. In this sense, Watergate succeeds brilliantly. Like them or not, these tormented characters throb with life.”
—Newsday

“Fiction of a remarkably high order . . . Fiction, to be sure. But just as acceptable as any of the factual explanations history has left us with.”
—The Washington Times

“An entertaining and surprisingly touching look at the 37th president’s self-inflicted downfall. . . Watergate is finely polished. Gore Vidal and E. L. Doctorow were instrumental in resuscitating the historical novel genre in this country. Now that their best days are past, it is comforting to know that the patient is thriving in Dr. Mallon’s capable hands.”
—The Miami Herald

“A clever comic novel. . . Imaginative fiction can tell a deeper truth than writing that sticks to demonstrable fact.”
—Slate

“It’s a brilliant presentation, subtle and sympathetic but spiked with satire that captures [Nixon] in all his crippling self-consciousness, his boundless capacity for self-pity and re-invention.”
—The Washington Post

“In this stealth bull’s-eye of a political novel, Thomas Mallon invests the Watergate affair with all the glitter, glamour, suave grace and subtlety that it doesn’t often get.”
—The New York Times

“Within the framework of the true, Mallon also has to find the plausible, which he has done in satisfying ways. . . . Mallon renders the era, the people and the place in vivid detail.”
—Los Angeles Times

“It is perhaps the unique accomplishment of Watergate, the excellent new novel by Thomas Mallon, to depict Nixon not as a moral to a story, a symptom of political pathology, or a walking character flaw, but as a man. . . . The great reward in reading this wise and thoughtful and subtle novel is that it reminds us that our leaders are only human beings.”
—Washington Monthly

“Watergate is the fruit of canny artistic decisions that transform the crude fabric of bygone events into the stuff of fine—and fun—historical fiction. . . . The author inhabits each of the characters with careful attention, deft humor and unstinting sympathy, mimicking habits of mind, foregrounding preoccupations and sketching in life stories as he moves the action forward.” —Washington Independent Review of Books
“Entertaining and warm-hearted.”
—USA Today

“Remarkable . . . the novel’s true brilliance rests upon Mallon’s ability to weave Watergate’s oft-told events into a moral tragedy that feels wholly new. Every public thread seems to be tugged by a private hand.”
—The Globe and Mail

“Never less than entertaining. Watergate demonstrates how a novelist can peel back layers of personality and motivation that historians must leave undisturbed. . . Watergate is a vivid and witty novel.”
—The Wall Street Journal

“Once Maggie Smith finishes imperiously dictating everyone’s life at ‘Downton Abbey,’ there’s another acid-tongued arbiter of taste just waiting for her: Alice Longworth, Teddy Roosevelt’s daughter. In Thomas Mallon’s densely intelligent new novel, Watergate, the octogenarian Longworth owns every scene she surveys, although she’s frankly not impressed by the quality of the current crop of courtiers. . . The dialogue is top-notch.”
—Christian Science Monitor

“Superbly entertaining fiction. . . Mallon’s insightful novel is a dream realized, not only for Watergate junkies but also for anyone fascinated by politics and human folly.”
—Richmond Times-Dispatch

“It already can be said with some certainty that no Watergate retread will be as imaginative or as entertaining as Watergate. . . . Full of telling, vivid detail . . . Mallon gets each of the characters with perfect pitch.”
—The Boston Globe

“Watergate, one of the best novels of the year, is entertaining, profound—and tragic.”
—The Charlotte Observer

Thomas Mallon is the author of eight novels, including Henry and Clara, Dewey Defeats Truman, and Fellow Travelers. He is a frequent contributor to The New Yorker, The New York Times Book Review and The Atlantic, among other publications.