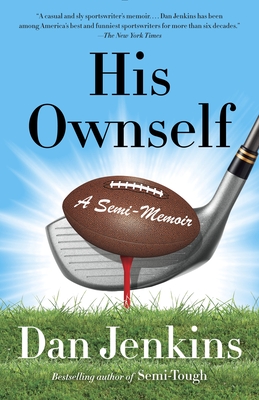 In His Ownself, Dan Jenkins takes us on a tour of his legendary career as a sportswriter and novelist. Here we see Dan's hone his craft, from his high school paper through to his first job at theFort Worth Press and on to the glory days of Sports Illustrated. Whether in Texas, New York, or anywhere for that matter, Dan was always at the center of it all—hanging out at Elaine's while swapping stories with politicians and movie stars, covering every Masters and U.S. Open and British Open for over four decades. The result is a knee-slapping, star-studded, once-in-a-lifetime memoir from one of the most important, hilarious, and semi-cantankerous sportswriters ever.

Praise For His Ownself: A Semi-Memoir (Anchor Sports)…

"A casual and sly sportswriter's memoir. . . . Dan Jenkins has been among America's best and funniest sportswriters for more than six decades."--The New York Times

"This is merely the greatest sportswriter of them all finally giving us an entire book about his greatest character:  His Ownself." --Mike Lupica

"Dan takes you on his lifelong journey through the world of sports and sports journalism. . . .  Be prepared to laugh a lot." --George H.W. Bush, 41st President of the United States

Dan Jenkins is one of America's most acclaimed sportswriters as well as a bestselling novelist. A native Texan, he has spent a lifetime at the typewriter and computer. He might best be known for his twenty-four years of stories in Sports Illustrated and now Golf Digest. Three of his bestselling novels, Semi-Tough, Dead Solid Perfect, and Baja Oklahoma, were made into movies. His sportswriting has won him many awards. In 2012 he was inducted into the World Golf Hall of Fame—one of only three writers to be honored thus far—and was given the PEN Lifetime Achievement Award for Literary Sports Writing. He is also the 2013 winner of the Red Smith Award, the highest honor in his profession.
Loading...
or
Not Currently Available for Direct Purchase