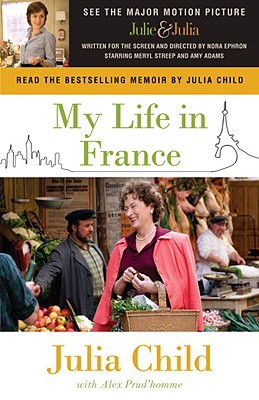 Julia Child single handedly awakened America to the pleasures of good cooking with her cookbook Mastering the Art of French Cooking and her television show The French Chef, but as she reveals in this bestselling memoir, she didn't know the first thing about cooking when she landed in France.

Indeed, when she first arrived in 1948 with her husband, Paul, she spoke no French and knew nothing about the country itself. But as she dove into French culture, buying food at local markets and taking classes at the Cordon Bleu, her life changed forever. Julia's unforgettable story unfolds with the spirit so key to her success as as a cook and teacher and writer, brilliantly capturing one of the most endearing American personalities of the last fifty years.

Julia Child was born in Pasadena, California. She graduated from Smith College and worked for the OSS during WWII; afterwards she lived in Paris, studied at the Cordon Bleu, and taught cooking with Simone Beck and Louisette Bartholle, with whom she wrote the first volume of Mastering the Art of French Cooking (1961). In 1963 Boston's WGBH launched "The French Chef" television series, which made Julia Child a national celebrity, earning her the Peabody Award in 1965 and an Emmy in 1966; subsequent public television shows were "Julia Child & Company" (1978), "Julia Child & More Company" (1980)--both of which were accompanied by cookbooks--and "Dinner at Julia's" (1983), followed by "Cooking with Master Chefs" (1993), "In Julia's Kitchen with Master Chefs" (1995), and her collaboration with Jacques Pepin, "Julia and Jacques Cooking at Home" (1999). The 40th anniversary edition of "Mastering the Art of French Cooking, Volume 1" was published in 2001.

Alex Prud'homme is Julia's grandnephew. A freelance writer, his journalism has appeared in "The New York Times," "The New Yorker," "Vanity Fair, ""Time, "and "People. "He is the author of The Cell Game and the co-author (with Michael Cherkasky) of Forewarned. He lives in Brooklyn, New York.

Praise For My Life in France (Movie Tie-In Edition)…

“Delightful and ebulliently written. . . . Her joy just about jumps off the book's pages.”
—The Christian Science Monitor

“Lively, infectious. . . . Her elegant but unfussy prose pulls the reader into her stories.”
—Chicago Sun-Times

“Captivating. . . . Her marvelously distinctive voice is present on every page.”
—San Francisco Chronicle