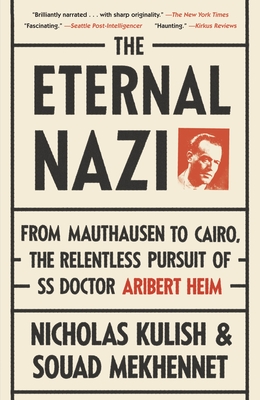 The tall foreigner living on Port Said Street in a Cairo hotel lived a simple life, reading books and writing letters, known as Uncle Tarek to neighborhood children. They did not know that he was actually Aribert Heim—the concentration camp doctor and fugitive from justice who became the most wanted Nazi war criminal in the world.

Dr. Aribert Heim worked at the Mauthausen concentration camp for only a few months in 1941 but left a horrifying mark on the memories of survivors. In the chaos of the postwar period, Heim was able to slip away from his dark past. But certain rare individuals in Germany were unwilling to let Nazi war criminals go unpunished. Among them was a police investigator named Alfred Aedtner, whose quest took him across Europe and across decades, and into a close alliance with legendary Nazi hunter Simon Wiesenthal. This is the incredible story of how Aribert Heim evaded capture, living in a working-class neighborhood of the Egyptian capital, praying in Arabic, beloved by an adopted Muslim family, while inspiring a manhunt that outlived him by many years. He became the “Eternal Nazi,” a symbol of Germany’s evolving attitude toward the sins of its past, which finally crested in a desire to see justice done at almost any cost.

"Brilliantly narrated...uses the countless jigsaw-puzzle pieces produced by a manhunt that lasted decades—including the many false leads that took Nazi-hunters to far-flung reaches of the globe—to explicate, with sharp originality, distinctive facets of the psychological and political landscape of the Third Reich and its long and complicated afterlife." —The New York Times Book Review

"A fascinating read. This is a tale of police procedural, in an era before computers and databases, of those hunting the worst humans this world had to offer."
—Seattle Post-Intelligencer

“Gripping...The Eternal Nazi shows how long it took for Germany to fully reckon with its Nazi past...Kulish and Mekhennet adeptly portray the silence and repression that surrounded Nazi crimes...Heim plays that ageless near-mythic figure, the evil man with a clear conscience, unrepentant to the end.”
—Tablet

"A brisk, compelling read, with all the frustrating plot twists and eccentric character cameos of an espionage thriller."
—The Jewish Daily Forward

"The Eternal Nazi manages that rare feat of being as cinematically riveting as it is morally serious."
—Buzzfeed

"This highly readable account unfolds more than a mystery novel than a work of non-fiction. It is crisply written, meticulously documented and highly engaging.  It is superb reporting that will keep readers engaged until the very last page."
—King Features

"A brilliant feat of historical detection that illuminates a nation’s dramatic reckoning with the crimes of the Holocaust." —Bookreporter.com

"Reads more like a mystery novel than a work of nonfiction."
—Fort Myers Florida Weekly

Nicholas Kulish is a correspondent for The New York Times. He was the paper’s Berlin bureau chief from 2007 to 2013.

Souad Mekhennet is a journalist and reports for The Washington Post and ZDF German television. She is an associate at the Weatherhead Center for International Affairs at Harvard University and a fellow at Johns Hopkins School of Advanced International Studies, and she previously worked for The New York Times.