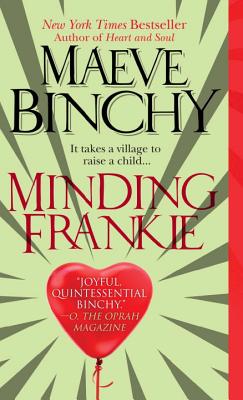 A tale of joy, heartbreak and hope, about a motherless girl collectively raised by a close-knit Dublin community.

When Noel learns that his terminally ill former flame is pregnant with his child, he agrees to take guardianship of the baby girl once she’s born. But as a single father battling demons of his own, Noel can’t do it alone.

Fortunately, he has a competent, caring network of friends, family and neighbors: Lisa, his unlucky-in-love classmate, who moves in with him to help him care for little Frankie around the clock; his American cousin, Emily, always there with a pep talk; the newly retired Dr. Hat, with more time on his hands than he knows what to do with; Dr. Declan and Fiona and their baby son, Frankie’s first friend; and many eager babysitters, including old friends Signora and Aidan and Frankie’s doting grandparents, Josie and Charles.

But not everyone is pleased with the unconventional arrangement, especially a nosy social worker, Moira, who is convinced that Frankie would be better off in a foster home. Now it’s up to Noel to persuade her that everyone in town has something special to offer when it comes to minding Frankie.

“All across America, Maeve Binchy fans will be kicking off their shoes, making a nice cup of tea, and curling up on the couch as they re-enter Binchy’s cozy world.” —The Seattle Times

“In Minding Frankie Binchy proves again why she’s the master of the intelligent comfort novel.” —The Plain Dealer

“One of Binchy’s best works. She harmoniously handles a diverse group of characters, the good deeds that characterize life in Ireland are believable, and the ending is sweet.” —Newark Star-Ledger

“Binchy’s worldview is a large, benevolent one, and the reader is happier for it. . . . Bless her big Irish heart.” —Minneapolis Star Tribune

“Maeve Binchy has done it again [with] yet another warm tale of individual growth and human community, [in which] she assembles a large cast of characters and deploys them with her characteristic playfulness . . . Binchy specializes in exploring human foibles without spelling them out in tiresome detail . . . There’s a good chance that many readers, like this one, will consider Minding Frankie one of Binchy’s best novels yet.” —BookPage

“Solid, reliable, and comforting in its familiarity, delivering to Binchy fans what they have come to expect from her novels. . . . A reminder of the author’s savvy ability to deliver what her loyal following has come to expect.” —The Irish Times

“Absorbing. . . . Teems with colorful characters whose concerns and connections are depicted with heart and humor. . . . New readers of Binchy will succumb to the appeal of the heartwarming tradition longtime fans love to love.” —The Free-Lance Star (Fredericksburg, VA)

“Binchy makes you laugh, cry, and care. Her warmth and sympathy render the daily struggles of ordinary people heroic and turn storytelling into art.” —The San Francisco Chronicle

“An author of exceptional grace [with] a wickedly subtle sense of humor and a great deal of kindness.” —The Boston Globe

“Maeve Binchy is a benevolent god of a novelist. . . . She can channel Irish voices with the best of them, and each of these voices has its own twisting story to tell. . . . often with verve and humor.” —The Columbus Dispatch

“Binchy is a grand storyteller in the finest Irish tradition. [She] has a true gift of creating characters we either know or wish we knew. . . . A perfect escape.” —Cleveland Plain Dealer

“Only a curmudgeon could resist this master of cheerful, read-by-fire comfort.” —Kirkus Reviews

Have you read any of Maeve Binchy’s other novels? How does this one compare?

If you’ve read other Binchy books, which characters did you recognize? Are there any you’d like to see in a future novel?

There are many parents in the book. Who would you say does the best job, and why?

There are a number of recent retirees, voluntary and otherwise, who become an important part of Frankie’s life. What kind of roles do her grandparents, Josie and Charles, take on? What about Dr. Hat and Muttie? More generally, what do the very young and the very mature have to offer each other?  Which generation do you think needs the other more?

“Emily told herself that she must not try to change the world. . . . But there were some irresistible forces that could never be fought with logic and practicality. Emily Lynch knew this for certain.” What “irresistible forces” does she mean? How does she fight them?

It’s clear what Noel gets from his relationship with Emily, but what does she get? How does the effect of alcoholism bond them?

Discuss Lisa’s relationship with Anton. Why is she so oblivious to his less attractive qualities? What is her turning point?

Why is Moira so obsessed with Frankie’s fate? Is it just fear, or is there something more going on?

How does Moira define “family”? How does Emily?

Lisa says to Moira, “I have a lot of worries and considerations in my life, but minding Frankie sort of grounds me. It gives it all some purpose, if you know what I mean.” Among Frankie’s caretakers, who else might say this?

Discuss the ethics of Moira’s dealings with Eddie Kennedy. Should she have told him about her father?

What did you think of Di Kelly’s reason for staying with her husband? What would you have done?

What is your opinion of Noel’s decision to get a DNA test? How would you have handled the results he received?

Many of the characters go through major upheavals in their lives. Who responds best, and why? Whose attitude changes the most?

What did you think of Stella’s letter to Frankie? What did we learn from it?