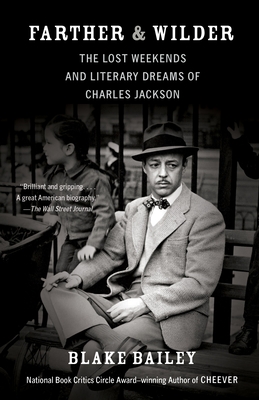 Charles Jackson’s novel The Lost Weekend—the story of five disastrous days in the life of an alcoholic—was published in 1944 to triumphant success. Although he tried to escape its legacy, Jackson is often remembered only as the author of this thinly veiled autobiography. In Farther & Wilder, the award-winning biographer of Richard Yates and John Cheever goes deeper, exploring Jackson’s life—from growing up in the scandal-plagued village of Newark, New York, to a career in Hollywood and friendships with everyone from Judy Garland and Billy Wilder to Thomas Mann and Mary McCarthy. This is the fascinating biography of a writer whose life and work encapsulated what it meant to be an addict and a closeted homosexual in mid-century America, and who was far ahead of his time in bringing these forbidden subjects into the popular discourse.

“Arresting. . . . Bailey is the literary biographer of our generation.”
—San Francisco Chronicle

“Scrupulous and compassionate. . . . As a portrait of the artist as a ruined man, Bailey’s account is a chilling addition to the museum of literary failure. . . . He presents [Jackson] credibly, with diligence and sympathy, as a man infatuated with the romantic image of The Writer.”
—The New York Times

“Meticulous and sensitive.”
—The New Yorker

“Bailey has made an author come alive in a way that is truly novelistic, has made him submit to becoming a character in a story. . . . A kind of miracle, one that we can all be grateful for.”
—Wall Street Journal

“The novelist Charles Jackson may not be as well known as subjects of Blake Bailey’s previous biographies . . . but he is no less fascinating. In Farther & Wilder . . . Mr. Bailey portrays his life with the same dogged attention to detail, literary panache and brilliant storytelling that he brought to those other subjects. . . . Mr. Bailey’s triumph is in fleshing out both Jackson’s literary legacy and the man himself.”
—New York Observer

“Impressive. . . . Reminds us not only how biography can be good, but also why the genre matters—how it can excavate importance from histories that might otherwise be forgotten. . . . Bailey’s achievement is staggering.”
—Los Angeles Review of Books

“[A] case for the resurrection of this deeply prescient and problematic novelist, who broke open taboos about alcoholics and homosexuals well before it was cool and championed F. Scott Fitzgerald when he was in the process of being remaindered. . . . [An] eloquent, poignant portrait of the artist as outsider and misfit.”
—Kirkus Reviews (starred review)

“Fascinating. . . . As is true of the best biographers, Bailey illuminates not only his subject but also the socio-cultural norms of the times. . . . [He] succeeds magnificently.”
—Lambda Literary

Blake Bailey is the author of A Tragic Honesty: The Life and Work of Richard Yates, a finalist for the National Book Critics Circle Award, and Cheever: A Life, winner of the National Book Critics Circle Award and the Francis Parkman Prize, and a finalist for the Pulitzer and James Tait Black Memorial Prizes. He edited a two-volume edition of Cheever’s work for the Library of America, and in 2010 received an Award in Literature from the American Academy of Arts and Letters. He lives in Virginia with his wife and daughter.