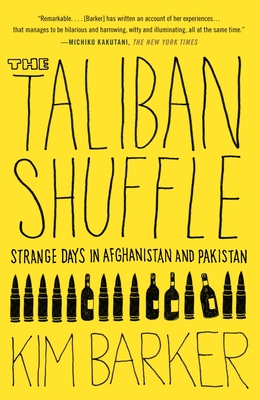 Strange Days in Afghanistan and Pakistan

In this darkly comic and unsparing memoir that "tells us more about the Afghan debacle than any foreign policy briefing” (The Seattle Times), the famed investigative journalist uses her wry, incisive voice to expose the absurdities and tragedies of the “forgotten war,” finding humor and humanity amid the rubble and heartbreak.

When Kim Barker first arrived in Kabul as a journalist in 2002, she barely owned a passport, spoke only English and had little idea how to do the “Taliban Shuffle” between Afghanistan and Pakistan. No matter—her stories about Islamic militants and shaky reconstruction were soon overshadowed by the bigger news in Iraq. But as she delved deeper into Pakistan and Afghanistan, her love for the countries grew, along with her fear for their future stability.


Praise For The Taliban Shuffle: Strange Days in Afghanistan and Pakistan…

“Remarkable. . . . [Barker] has written an account of her experiences covering Afghanistan and Pakistan that manages to be hilarious and harrowing, witty and illuminating, all at the same time.” —Michiko Kakutani, The New York Times

“The Taliban Shuffle isn’t like any other book out there about Afghanistan and Pakistan. It’s witty, brilliant, and impossible to put down.” —Rajiv Chandrasekaran, author of Imperial Life in the Emerald City

“The Taliban Shuffle is part war memoir, part tale of self-discovery that, thanks to Barker’s biting honesty and wry wit, manages to be both hilarious and heartbreaking.” —Chicago Tribune

“What you’d hear if the reporter never turned off the voice recorder between interviews—brilliant firsthand outtakes that wind up telling us more about the Afghan debacle than any foreign policy briefing.” —The Seattle Times

“At once funny and harrowing, insightful and appalling. . . . The Taliban Shuffle will pull you in so deep that you’ll smell the poppies and quake from the bombs.” —The Minneapolis Star Tribune

“If you’re looking for a window on the challenges facing Afghanistan and Pakistan today—from a resurgent Taliban to American incompetence to Afghan and Pakistani corruption and nepotism—Barker provides a sterling vantage point.” —San Francisco Chronicle

“Kim Barker gives a true and amusing picture of hellholes and the reporters on assignment in them. But she breaks the journo code of silence and reveals a trade secret of the hacks who cover hellholes: The hell of the holes is that they’re kind of fun.” —P. J. O'Rourke

“The Taliban Shuffle gives us an insider’s perspective of Afghanistan and Pakistan—their fascinating cultures, unstable governments, and burgeoning terrorist groups. . . . With dark, self-deprecating humor and shrewd insight, Barker chronicles her experiences as a rookie foreign reporter and the critical years when the Taliban resurged amidst the collapse of the Afghan and Pakistani governments.” —The Daily Beast

“Politically astute and clearly influenced by Hunter S. Thompson, Barker provides sharp commentary on the impotence of American foreign policy in South Asia after the victory against the Taliban. . . . Fierce, funny and unflinchingly honest.” —Kirkus Reviews

“Reveals many enduring truths. . . . Novel both for its humor and for its perspective . . . it rises (or sinks) to levels of seriousness that will be remembered long after the po-faced analysis of other writers has been forgotten.” —The National

“Candid and darkly comic. . . . With self-deprecation and a keen eye for the absurd, Barker describes her evolution from a green, fill-in correspondent to an adrenaline junkie.” —Publisher’s Weekly

“The Taliban Shuffle is Scoop meets Dispatches, remixed with a twenty-first-century Bollywood soundtrack. Laugh-out-loud funny, it is the true story of what it is like to be a female journalist in one of the world's most exotic war zones, while telling the reader much about what is really going on today in Afghanistan and Pakistan.” —Peter Bergen, author of The Longest War: The Enduring Conflict between America and Al-Qaeda

“Yes, there are bombs. And there is carnage. And all sorts of mayhem. But mostly there are people, human beings even, with appetites—for life, for adventure, for riches, for love. Ms. Barker offers this world—the human world caught in the crosshairs of history—with a vitality rarely seen in accounts of the war. A compelling read that offers readers a glimpse of the goings-on behind the byline.” —J. Maarten Troost, author of The Sex Lives of Cannibals

Kim Barker was the South Asia bureau chief for The Chicago Tribune from 2004 to 2009, based in New Delhi and Islamabad. Her book about those years, The Taliban Shuffle: Strange Days in Afghanistan and Pakistan, a dark comedic take on her time in South Asia, was published by Doubleday. The movie version, Whiskey Tango Foxtrot, was released in 2016, starring Tina Fey, Martin Freeman, Alfred Molina, Margot Robbie and Billy Bob Thornton. Barker is now a metro reporter at The New York Times, specializing in investigative reporting and narrative writing. Before joining The Times in mid-2014, Ms. Barker was an investigative reporter at ProPublica.