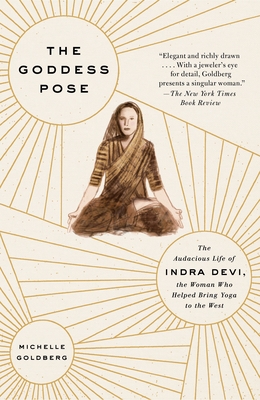 The Audacious Life of Indra Devi, the Woman Who Helped Bring Yoga to the West

When Indra Devi was born in Russia in 1899, yoga was virtually unknown outside of India. By the time of her death, in 2002, it was being practiced around the world. Here Michelle Goldberg tells the globetrotting story of the incredible woman who helped usher in a craze that continues unabated to this day. A sweeping picture of the twentieth century that travels from the cabarets of Berlin to the Mysore Palace to Golden Age Hollywood and beyond, The Goddess Pose brings the Devi’s little known but extraordinary adventures vividly to life.

Michelle Goldberg is a journalist and the author of the New York Times best seller Kingdom Coming: The Rise of Christian Nationalism, which was a finalist for the New York Public Library’s Helen Bernstein Book Award for Excellence in Journalism, and The Means of Reproduction: Sex, Power, and the Future of the World, winner of the J. Anthony Lukas Work-in-Progress Award and the Ernesta Drinker Ballard Book Prize. A senior contributing writer at The Nation, she has also written pieces for The New Yorker, The New York Times, Newsweek, The New Republic, Glamour, and many other publications. She lives in Brooklyn with her husband and children.

Praise For The Goddess Pose: The Audacious Life of Indra Devi, the Woman Who Helped Bring Yoga to the West…

“Fascinating. . . . [Devi’s] story and influence live on in this can’t-miss memoir.” —Yoga Journal

“It’s hard to believe that the life of Indra Devi . . . hasn’t been made into a blockbuster film. . . . Without idolizing or condemning her, Goldberg evokes Devi’s complicated nature as deftly as she does the Russian Empire, Weimar Berlin, occupied Shanghai, and so many of the other places where Devi worked, loved, and proselytized.” —New York Magazine

"Goldberg’s book is lots of fun. . . . Even if you don’t care enough about yoga to hold a pigeon pose for the length of time it takes to say [the] title, Indra Devi . . . remains no less a fascinating character." —Los Angeles Times

"Engaging. . . offers fresh insights into commonly held assumptions, including the relatively new origins of many physical asanas. . . . Goldberg’s own discovery of yoga and Indra Devi forms a riveting prologue to an expansive book that underlines how truly global yoga has become after it was taken from Indian shores more than a century ago." —The Times of India

"A celebration of female freedom and everything it can bring: an appetite for adventure, fearlessness in the face of challenge, and, most important, discovery and assertion of self."
—Anna Holmes, founding editor, Jezebel

"The story of how Devi came to embrace yoga and spread its gospel in America is as fascinating as it is unlikely. . . . [Goldberg’s] goal in writing The Goddess Pose seems to have been not just chronicling the life of one of the world’s great iconoclasts, but also providing a history for how hatha yoga went from an Indian spiritual tradition to an everyday part of western lives. She succeeds admirably on both counts." —The Guardian

"Michelle Goldberg’s masterful engagement with her astonishing subject—and with the diverse political, spiritual, and physical worlds she inhabited—is evident on every page." —Rebecca Traister, author of Big Girls Don’t Cry

"Goldberg’s account of Devi takes the reader through three chronicled, influential centuries of the yogi, actress, and fearless voyager’s life which will leave you with a better understanding of how westernized Yoga differs from its roots . . . and a major dose of inspiration to get you on the way to your next blissed-out savasana." —Nylon

"[The Goddess Pose] captures Devi’s Forrest Gump–like propensity to live parallel to some of the most important moments of the previous century." —New York Post

"[Goldberg] expertly assembles the puzzle pieces of Devi’s life, pausing to provide context for the growing influence of spiritualism on modern American life." —The Globe and Mail (Toronto)

"Whether you’re a student of yoga, a history buff, an armchair adventurer, or just a reader in search of an unputdownable story that happens to be true, you’ll love this fascinating biography of one of the twentieth century’s boldest, most influential women." —Katha Pollitt, author of Learning to Drive: And Other Life Stories