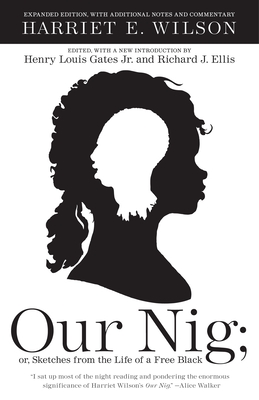 or, Sketches from the Life of a Free Black

With a New Introduction and Notes by Henry Louis Gates, Jr. and Richard J. Ellis

A fascinating fusion of two literary models of the nineteenth century, the sentimental novel and the slave narrative, Our Nig, apart from its historical significance, is a deeply ironic and highly readable work, tracing the trials and tribulations of Frado, a mulatto girl abandoned by her white mother after the death of the child's black father, who grows up as an indentured servant to a white family in nineteenth-century Massachusetts.

This definitive edition of Our Nig includes a new Introduction by Henry Louis Gates, Jr. and Richard J. Ellis and a set of appendices:  "Harriet Wilson's Career as a Spiritualist";  "Hattie E. Wilson in the Banner of Light and Spiritual Scientist" a collection of her extant contributions to these newspapers;  "Documents from Harriet Wilson's Life in Boston," and a compilation of primary source material relating to Wilson's identity.  There is also a new chronology of the life of Harriet Wilson by Richard J. Ellis, as well as an up-to-date Select Bibliography of current scholarship regarding Harriet Wilson. This edition gives the fullest account to date of the life of Harriet Wilson, filling out many critical points regarding her life after writing Our Nig, in particular when she became a "medium" who communicated with the dead and as an educator in the "Spiritualist" movement after the Civil War.

Harriet E. Wilson (1825–1900) was born in New Hampshire, where she worked from a young age as a servant to an abusive family.

Henry Louis Gates, Jr., is the Alphonse Fletcher University Professor and the Director of the W. E. B. Du Bois Institute for African and African American Research at Harvard University. The author of numerous books, including the widely acclaimed memoir Colored People, Professor Gates has also edited several anthologies and is coeditor with Kwame Anthony Appiah of Encarta Africana, an encyclopedia of the African Diaspora. An influential cultural critic, he is a frequent contributor to The New Yorker and other publications and is the recipient of many honors, including a MacArthur Foundation Fellowship and the National Humanities Medal.


Richard J. Ellis is Professor and Chair of the American and Canadian Studies Department at the University of Birmingham in the United Kingdom. He has published widely on American studies topics. His two most recent monographs are Liar! Liar!—Jack Kerouac Novelist (1999) and Harriet Wilson's Our Nig: A Cultural Biography (2003). He is the editor of Comparative American Studies: An International Journal and currently serves on the ASA's International Committee.


Praise For Our Nig: or, Sketches from the Life of a Free Black…

"I sat up most of the night reading and pondering the enormous significance of Harriet Wilson's novel, Our Nig. It is as if we'd just discovered Phillis Wheatley—or Langston Hughes.... She represents a similar vastness of heretofore unexamined experience, a whole new layer of time and existence in American life and literature." —Alice Walker

"The story of Henry Louis Gates' discovery of this extraordinary book and his persistent search for the true identity of the author is a notable and lasting contribution to the literary history of black Americans." —Ann Petry

"Our Nig is a fascinating and revealing historical document that transmogrifies the rhetorical devices of the sentimental 'woman's novel' into an early Afro-American commentary on race, class, and poverty in mid-nineteenth-century America. Professor Gates' introduction and critical apparatus describe the detective work that established Harriet E. Wilson's authorship; Professor Gates also places the book within the widest literary and historical context." —David Brion Davis, Sterling Professor of History, Yale University

"Harriet Wilson's use of the conventions of sentimental fiction demonstrates conclusively that fictional forms were at least as important in determining how we write what we write as were the slave narratives. Professor Gates' discovery confirms my suspicion that there was more 'free-floating' literacy available to Negroes than has been assumed." —Ralph Ellison
or support indie stores by buying on
Copyright © 2020 American Booksellers Association