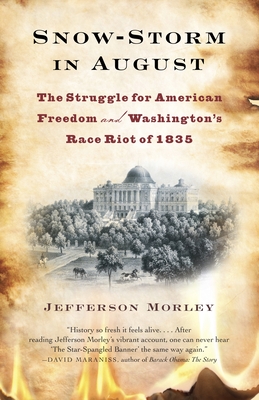 The Struggle for American Freedom and Washington's Race Riot of 1835

In 1835, the city of Washington simmered with racial tension as newly freed African Americans from the South poured in, outnumbering slaves for the first time. Among the enslaved was nineteen-year-old Arthur Bowen, who stumbled home drunkenly one night, picked up an axe, and threatened his owner, respected socialite Anna Thornton. Despite no blood being shed, Bowen was eventually arrested and tried for attempted murder by district attorney Francis Scott Key, but not before news of the incident spread like wildfire. Within days Washington’s first race riot exploded as whites, fearing a slave rebellion, attacked the property of free blacks. One of their victims was gregarious former slave and successful restaurateur Beverly Snow, who became the target of the mob’s rage. With Snow-Storm in August, Jefferson Morley delivers readers into an unknown chapter in history with an absorbing account of this uniquely American battle for justice.


Praise For Snow-Storm in August: The Struggle for American Freedom and Washington's Race Riot of 1835…

“Fascinating. . . . An exploration of America’s capital city at a time when the fault line over slavery had become impossible to ignore. . . . [Morley’s] plunge beneath the surface of history exposes realities more true to daily experience than executive proclamations or speeches in Congress. . . . Snow-Storm in August deepens our appreciation of how slavery made a mockery of the founding and made the Civil War as close to inevitable as any event in our history.”
—The Washington Post

“A vibrant and illuminating picture of the antebellum capital at a time when national stability depended on placating the owners of slaves. . . . [Morley] reveals a tangle of back stories that eventually lead deep into a tension-filled landscape of class resentments, provocative abolitionism and proslavery passions. It is a world peopled with vivid characters both black and white, among them, most intriguingly, the city’s district attorney, Francis Scott Key, the author of ‘The Star-Spangled Banner.'"
—The Wall Street Journal

“Morley’s gripping, fast-paced narrative captures all the drama that encompasses a rich cast of characters that includes Andrew Jackson, Francis Scott Key, Roger Taney, Sam Houston, and a host of others who inhabited the young nation’s capital. . . . Morley has given readers a noteworthy, insightful look into an often overlooked chapter in American history.”
—Booklist

“Jefferson Morley has vividly and factually recreated a largely lost but pivotal time in Jacksonian Washington, an emerging, still somewhat primitive capital city where racial tensions among its complex mix of white, free black, and enslaved residents inevitably lead to violence and push the debate over abolition into the houses of Congress and the President. The historical characters, famous and forgotten, come to life in affecting and surprising ways without fictional artifice, a tribute to Morley’s meticulous research and empathetic narrative style.”
—Leonard Downie Jr., former executive editor of The Washington Post

“Absorbing. . . . This book reminds us how deeply entrenched proslavery forces were in the nation’s capital and what a struggle it was for African Americans to receive justice and for abolitionists to be heard. . . . An enlightening account of racial tension in pre-Civil War America.”
—BookPage

“Morley vividly recreates the episodes connected to the riot, and dramatically depicts the personalities involved, giving important insight into race relations before the Civil War.”
—The Columbus Dispatch

“Salon Washington correspondent Jefferson Morley boldly and elegantly recreates a moment in time when free black businessmen mingled with their white counterparts while proponents of slavery and abolitionists struggled to co-exist in the nation’s bustling capital. . . . A crackling good tale of the deep impact of race and politics on a young nation struggling to create its identity.”
—Publishers Weekly, starred review

“A sprightly social history. . . . Morley ably weaves the many strands together. . . . A suspenseful tale, culminating in the court of law where Key upheld the country’s oppression of African-Americans and thereby helped shape the rancorous debate over slavery. . . . Elegant and nimble history of a series of events likely unknown to many readers.”
—Kirkus Reviews

Jefferson Morley is the D.C. editor of Salon. He has worked as an editor and reporter at The Washington Post, The Nation, The New Republic, and Harper’s.