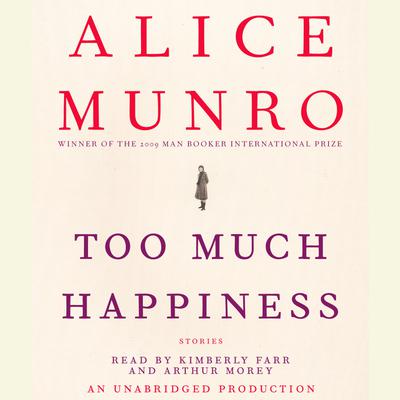 Too Much Happiness (Digital Audiobook)

“A new work by Alice Munro is always cause for celebration, and this collection of stories is no exception. These stories are like smooth, fast rivers on the surface, hiding a deep turbulence. Each cool and intelligent voice lures me deep into the tale, but never fails to deal a swift jerk and embed a hook deep and permanent.”
— Karen M. Frank, Northshire Bookstore, Manchester Center, VT
View the List

Ten superb new stories by one of our most beloved and admired writers—the winner of the 2009 Man Booker International Prize.

In the first story a young wife and mother receives release from the unbearable pain of losing her three children from a most surprising source. In another, a young woman, in the aftermath of an unusual and humiliating seduction, reacts in a clever if less-than-admirable fashion. Other stories uncover the “deep-holes” in a marriage, the unsuspected cruelty of children, and how a boy’s disfigured face provides both the good things in his life and the bad. And in the long title story, we accompany Sophia Kovalevsky—a late-nineteenth-century Russian émigré and mathematician—on a winter journey that takes her from the Riviera, where she visits her lover, to Paris, Germany, and, Denmark, where she has a fateful meeting with a local doctor, and finally to Sweden, where she teaches at the only university in Europe willing to employ a female mathematician.

With clarity and ease, Alice Munro once again renders complex, difficult events and emotions into stories that shed light on the unpredictable ways in which men and women accommodate and often transcend what happens in their lives.

Alice Munro grew up in Wingham, Ontario, and attended the University of Western Ontario. She has published eleven collections of stories and two volumes of selected stories, as well as a novel. During her distinguished career she has been the recipient of many awards and prizes, including three of Canada's Governor General's Literary Awards and two of its Giller Prizes, the Rea Award for the Short Story, the Lannan Literary Award, England's W. H. Smith Book Award, the United States' National Book Critics Circle Award, the Edward MacDowell Medal in literature, and the Man Booker International Prize. Her stories have appeared in The New Yorker, The Atlantic Monthly, The Paris Review, and other publications, and her collections have been translated into thirteen languages. Alice Munro lives in Clinton, Ontario, near Lake Huron.