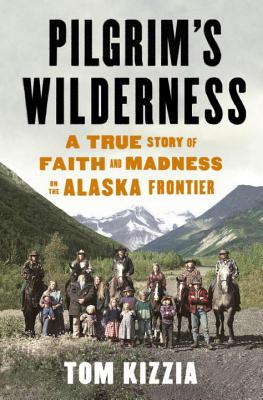 A True Story of Faith and Madness on the Alaska Frontier

"Into the Wild"meets"Helter Skelter"in this riveting true story of a modern-day homesteading family in the deepest reaches of the Alaskan wilderness and of the chilling secrets of its maniacal, spellbinding patriarch.
When Papa Pilgrim appeared in the Alaska frontier outpost of McCarthy with his wife and fifteen children in tow, his new neighbors had little idea of the trouble to come. The Pilgrim Family presented themselves as a shining example of the homespun Christian ideal, with their proud piety and beautiful old-timey music, but their true story ran dark and deep. Within weeks, Papa had bulldozed a road through the mountains to the new family home at an abandoned copper mine, sparking a tense confrontation with the National Park Service and forcing his ghost town neighbors to take sides in an ever-more volatile battle over where a citizen's rights end and the government's power begins.
In "Pilgrim's Wilderness," veteran Alaska journalist Tom Kizzia unfolds the remarkable, at times harrowing, story of a charismatic spinner of American myths who was not what he seemed, the townspeople caught in his thrall, and the family he brought to the brink of ruin. As Kizzia discovered, Papa Pilgrim was in fact the son of a rich Texas family with ties to Hoover's FBI and strange, oblique connections to the Kennedy assassination and the movie stars of "Easy Rider." And as his fight with the government in Alaska grew more intense, the turmoil in his brood made it increasingly difficult to tell whether his children were messianic followers or hostages in desperate need of rescue. In this powerful piece of Americana, written with uncommon grace and high drama, Kizzia uses his unparalleled access to capture an era-defining clash between environmentalists and pioneers ignited by a mesmerizing sociopath who held a town and a family captive.

TOM KIZZIA has traveled widely in rural Alaska for the"Anchorage Daily News," and his work has appeared inthe" Washington Post"and been featured on CNN. His first book, "The Wake of the Unseen Object," was named one of the best all-time nonfiction books about Alaska by the state s historical society. He lives in Homer, Alaska."

Praise For Pilgrim's Wilderness: A True Story of Faith and Madness on the Alaska Frontier…

"Pilgrim's Wilderness is measured, painstakingly reported and gripping, giving us a true look at an escapist nightmare in America's mythic and fading frontier." —Los Angeles Times

“Not since The Shining has family life off the grid seemed as terrifying as it does in Pilgrim’s Wilderness, by Tom Kizzia, but this time the chills come from nonfiction."
– Arts Beat, New York Times

“With even reporting and spare, lovely prose, Kizzia exposes the tyrannies of faith, and a family’s desperate unraveling. It will make your skin crawl.”–The Daily Beast

"For those awaiting the next Jon Krakauer-esque classic, look to an Alaskan writer named Tom Kizzia… A gripping nonfiction thriller told with masterful clarity…I’m betting it will be the sleeper hit of the summer. Put it at the top of your stack.”–Outside Magazine

“Reads like a bewitching, brilliant novel... Even in the hands of a mediocre writer, this story would be mesmerizing. But Kizzia’s gifts as a journalist and writer are such that it is a powerhouse of a book, destined to become a wilderness-tale classic like Jon Krakauer’s Into the Wild. On one level, it’s a brilliant exploration of the kinds of frontier issues that most of America put away more than 100 years ago — rugged individualism vs. community cooperation and compromise, and wilderness harnessers vs. preservationists. But most and best of all, it is the story of how a pack of illiterate, brainwashed children came to realize that the man they looked up to as a god was actually a tyrant, and how they found the courage to break free. Here’s to them, and to Kizzia for telling their incredible story.”
– Minneapolis Star Tribune

“Kizzia is a smart, tough reporter who knows a good story when he sees one and doesn't let go… [Pilgrim’s Wilderness] is a masterful book. One of its strengths is that by sticking to the story and not trying to do too much, it does just about everything. Another is the way Kizzia withholds information until the right moment, building suspense by staying with a linear narrative that gradually reveals the monster at the center.” – Portland Oregonian

“The central figure in this book crosses paths with an incredible constellation of the famous and notorious and becomes a sort of evil, Alaskan Forrest Gump….an irresistible page-turner.” – Dallas Morning News

"The mixture of Texas weirdness with Alaska nativism provides for riveting reading...Kizzia expertly goes back and forth in time to reveal the details of Papa Pilgrim's journey from would-be messiah to pariah."–Austin American Statesman

"As the Pilgrims go from activists championed by Sarah Palin to musicians beloved by Portland hipsters to a horrifying fall from grace, Kizzia’s clear-eyed depiction never wavers. His even-handed and, at times, sympathetic treatment of the Pilgrims makes the full reveal of Hale’s monstrous behavior that much more appalling—and the tale of redemption that ends the book that much more heart-wrenching." – Metropulse

“Sends readers on a roller-coaster ride that is as thrilling as it is shocking. Kizzia’s work is a testament to both the cruelty and resiliency of the human spirit, capturing the sort of life-and-death struggle that can only occur on the fringes of modern-day civilization.” –Publishers Weekly

"Meticulously researched, Pilgrim’s Wilderness is an absorbing and substantive education on America’s Last Frontier encased in a blood-pumping, nightmarish family drama as brutal as the wilderness itself. Kizzia writes of Alaska with the affection and steadiness of a weathered travel guide—the kind who knows the best route in. And the best route out.”–Kirkus Reviews

"Strong work of reportage... [Papa Pilgrim's] intriguing past crumbles in comparison to his excruciating cruelty and to the inspiring grace and strength of his children."–Booklist

“The riveting story of a megalomaniacal sociopath who left a trail of woe from Texas to the Great White North, Pilgrim’s Wilderness lends credence to the maxim that the unadulterated truth, when conveyed with sufficient skill, is not only more illuminating than fiction, but also more entertaining. Tom Kizzia has written an uncommonly insightful book about post-frontier Alaska, an ambitious literary work disguised as a page-turner, very much in the tradition of Edward Hoagland’s Notes From the Century Before and John McPhee’s Coming into the Country.” –Jon Krakauer, author of Into the Wild and Under the Banner of Heaven

"This is a riveting, mesmerizing story, stunning and eloquent all at the same time.  I simply couldn't put it down." —Ken Burns, filmmaker, The Civil War and The National Parks: America's Best Idea

“Tom Kizzia's superb book is startling, unpredictable, haunting, clear-eyed, unrelenting, sad, and beautiful.  Pilgrim's Wilderness, in other words, is like Alaska itself, a subject the author understands deeply and evokes with uncommon skill.” – David Maraniss, author of When Pride Still Mattered and They Marched into Sunlight

“What an epic story – sociopathy and crazy ideology hits the final frontier.  Jon Krakauer couldn’t have done it any better.” – Bill McKibben, author of Eaarth and Deep Economy

“Pilgrim’s Wilderness is a fine book, methodically narrating a tale of libertarianism gone haywire on a genuine frontier.” – Edward Hoagland, author of Children Are Diamonds

“Tom Kizzia’s Pilgrim’s Wilderness is a bizarre and twisted Alaska saga of mythic proportions. This nonfiction gem has ‘Hollywood hit’ written all over it. Once you start reading, you won’t be able to put it down.” – Douglas Brinkley, author of The Quiet World

“There isn't a bad sentence in Pilgrim’s Wilderness, not a dull page or sour note.  A masterpiece of reporting and storytelling.” – Zev Chafets, author of Cooperstown Confidential and A Match Made in Heaven

“The bizarre and tragic true story that unfolds in the pages of this extraordinary book is like nothing else I have ever read.  Through prodigious research, blending compassion with investigative skill, Tom Kizzia has woven a mythic tale out of that most mythic of American landscapes – Alaska.” – David Roberts, author of Alone on the Ice

“Tom Kizzia hasn't just observed and written about Alaska for three-plus decades, he's lived it.  Pilgrim's Wilderness is a story that needed to be told by the only man who could tell it.” – Tom Bodett, author of Williwaw! and The End of the Road

“Alaska as a land of self-invention and frontier contradictions has never been better captured than in Pilgrim’s Wilderness.  Tom Kizzia, “Neighbor Tom” to the enigmatic figure at the center of this riveting story, combines an insider’s view with thorough and compassionate investigative reporting.  This fascinating, harrowing, ultimately redemptive, and beautifully written account is sure to become a classic.” – Nancy Lord, former Alaska Writer Laureate and author of Fish Camp, Beluga Days and Early Warming

“In Pilgrim's Wilderness Tom Kizzia uncovers the tragic confrontation between America's frontier past and its settled future. "The Last Frontier" is the hot bed and Alaskans probably the most divided and conflicted of all. Mix this with the attraction that frontiers have for the unstable, darker forces in the human personality and we get the startling case of Papa Pilgrim and his family, as well as a hell of a yarn.” —Carl Pope, former executive director of The Sierra Club and author of Strategic Ignorance

“A stunning and downright scary tale by one of Alaska's most knowledgeable journalists.  Tom Kizzia's investigative talents and his love of America's frontier state come through clearly in this true story that reads like a novel.” –James Risser, two-time winner of the Pulitzer Prize for national reporting

"Pilgrim’s Wilderness is not a book -- it’s a powerful magnet, and once you begin you will not be able to pull yourself away. This spellbinding, shocking, and, yes, inspirational story of a family’s journey into the heart of darkness delivers the raw power and revelatory truth of a Scorcese film. Except better, because every word is true." –Daniel Coyle,author of The Secret Race and The Talent Code.