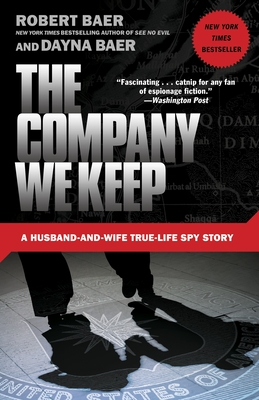 The Company We Keep

Robert Baer was known inside the CIA as perhaps the best operative working the Middle East. Over several decades he served everywhere from Iraq to New Delhi and racked up such an impressive list of accomplishments that he was eventually awarded the Career Intelligence Medal.  But if his career was everything a spy might aspire to, his personal life was a brutal illustration of everything a spy is asked to sacrifice. Bob had few enduring non-work friendships, only contacts and acquaintances. His prolonged absences destroyed his marriage, and he felt intense guilt at spending so little time with his children. Sworn to secrecy and constantly driven by ulterior motives, he was a man apart wherever he went.

Dayna Williamson thought of herself as just an ordinary California girl -- admittedly one born into a comfortable lifestyle.  But she was always looking to get closer to the edge.  When she joined the CIA, she was initially tasked with Agency background checks, but the attractive Berkeley graduate quickly distinguished herself as someone who could thrive in the field, and she was eventually assigned to “Protective Operations” training where she learned to handle weapons and explosives and conduct high-speed escape and evasion. Tapped to serve in some of the world's most dangerous places, she discovered an inner strength and resourcefulness she'd never known -- but she also came to see that the spy life exacts a heavy toll.  Her marriage crumbled, her parents grew distant, and she lost touch with friends who'd once meant everything to her.

When Bob and Dayna met on a mission in Sarajevo, it wasn't love at first sight. They were both too jaded for that. But there was something there, a spark. And as the danger escalated and their affection for each other grew, they realized it was time to leave “the Company,” to somehow rediscover the people they’d once been.

As worldly as both were, the couple didn’t realize at first that turning in their Agency I.D. cards would not be enough to put their covert past behind.  The fact was, their clandestine relationships remained.  Living as “civilians” in conflict-ridden Beirut, they fielded assassination proposals, met with Arab sheiks, wily oil tycoons, terrorists, and assorted outlaws – and came perilously close to dying.  But even then they couldn’t know that their most formidable challenge lay ahead.

Simultaneously a trip deep down the intelligence rabbit hole – one that shows how the “game” actually works, including the compromises it asks of those who play by its rules -- and a portrait of two people trying to regain a normal life, The Company We Keep is a masterly depiction of the real world of shadows.

"Funny, frightening, ironic, and deeply moving, this is an utterly engrossing thrill ride through the hall of mirrors that is modern espionage…A wonderful book."--Richard North Patterson, New York Times bestselling author of Degree of Guilt and In the Name of Honor

"Provides a spot-on and compelling portrait of real life inside the CIA; the periods of boredom and frustration loudly punctuated by fast-moving and sometimes frightening, sometimes amusing intelligence operations.  Bob and Dayna Baer are the real deal and they beautifully capture the murky world they lived and worked in for years."--Valerie Plame Wilson, New York Times bestselling author of Fair Game

ROBERT BAER is the author of three New York Times bestsellers involving the CIA: See No Evil (which was the basis for the acclaimed film “Syriana”), Sleeping with the Devil, and The Devil We Know. He has become one of the most authoritative voices on American intelligence and frequently appears as a media commentator. DAYNA BEAR, before leaving the agency to settle down with Bob, was herself an accomplished CIA operative.
Loading...
or
Not Currently Available for Direct Purchase