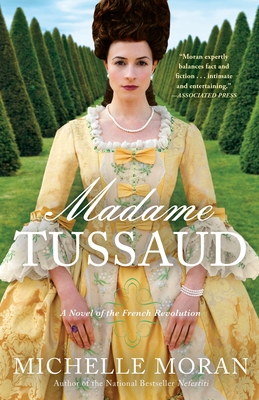 A Novel of the French Revolution

The world knows Madame Tussaud as a wax artist extraordinaire . . . but who was this woman who became one of the most famous sculptresses of all time? In these pages, her tumultuous and amazing story comes to life as only Michelle Moran can tell it. The year is 1788, and a revolution is about to begin.

Smart and ambitious, Marie Tussaud has learned the secrets of wax sculpting by working alongside her uncle in their celebrated wax museum, the Salon de Cire. From her popular model of the American ambassador, Thomas Jefferson, to her tableau of the royal family at dinner, Marie’s museum provides Parisians with the very latest news on fashion, gossip, and even politics. Her customers hail from every walk of life, yet her greatest dream is to attract the attention of Marie Antoinette and Louis XVI; their stamp of approval on her work could catapult her and her museum to the fame and riches she desires. After months of anticipation, Marie learns that the royal family is willing to come and see their likenesses. When they finally arrive, the king’s sister is so impressed that she requests Marie’s presence at Versailles as a royal tutor in wax sculpting. It is a request Marie knows she cannot refuse—even if it means time away
from her beloved Salon and her increasingly dear friend, Henri Charles.

As Marie gets to know her pupil, Princesse Élisabeth, she also becomes acquainted with the king and queen, who introduce her to the glamorous life at court. From lavish parties with more delicacies than she’s ever seen to rooms filled with candles lit only once before being discarded, Marie steps into a world entirely different from her home on the Boulevard du Temple, where people are selling their teeth in order to put food on the table.

Meanwhile, many resent the vast separation between rich and poor. In salons and cafés across Paris, people like Camille Desmoulins, Jean-Paul Marat, and Maximilien Robespierre are lashing out against the monarchy. Soon, there’s whispered talk of revolution. . . . Will Marie be able to hold on to both the love of her life and her friendship with the royal family as France approaches civil war? And more important, will she be able to fulfill the demands of powerful revolutionaries who ask that she make the death masks of beheaded aristocrats, some of whom she knows?

Spanning five years, from the budding revolution to the Reign of Terror, Madame Tussaud brings us into the world of an incredible heroine whose talent for wax modeling saved her life and preserved the faces of a vanished kingdom.

Praise For Madame Tussaud: A Novel of the French Revolution…

"Certain to be a breakout book for Moran, this superbly written and plotted work is a welcome addition to historical fiction collections. The shocking actions and behavior required of Tussaud to survive the revolution make the novel a true page-turner and a perfect reading group choice."--Library Journal, starred review

"This is a first-class novel, brilliantly written, and Michelle Moran has authentically evoked an era, infusing her narrative with passages of gripping and often horrifying drama, set in one of history's most brutal periods. The scope of the author's research is staggering, but you won't need to get to the notes at the end to realize that. As historical novels go, this is of the first rank--a page-turner that is both vividly and elegantly written. I feel privileged to be able to endorse it."—Alison Weir, author of Eleanor of Aquitane

"Moran’s latest is an excellent and entertaining novel steeped in the zeitgeist of the period. Highly recommended."--Historical Novels Review, Editors' Choice

"This is an unusually moving portrayal of families in distress, both common and noble. Marie Antoinette in particular becomes a surprisingly dimensional figure rather than the fashionplate, spendthrift caricature depicted in the pamphlets of her times. A feat for Francophiles and adventurers alike."--Publishers Weekly

"Madame Tussaud...is brought to life in this well-crafted, fast-paced novel by the talented Michelle Moran...Michelle Moran has done what few novelists have been successfully able to accomplish, and that is to depict the full range of the swift political changes that occurred in the few years from the fall of the Bastille to the beheading of the king. Madame Tussaud promises to be a breakout book for this talented writer—a novel that is both a gripping fictionalized biography of an intriguing woman and a well-paced, illuminating chronicle of the French Revolution."--New York Journal of Books

"Well-plotted...Mannered and elegant; reminiscent in many ways of novels of days long past."--Kirkus

MICHELLE MORAN was a public high school teacher for six years and is currently a full-time writer living in California. She is the author of the national bestseller Nefertiti, The Heretic Queen, and Cleopatra's Daughter.
Loading...
or
Not Currently Available for Direct Purchase