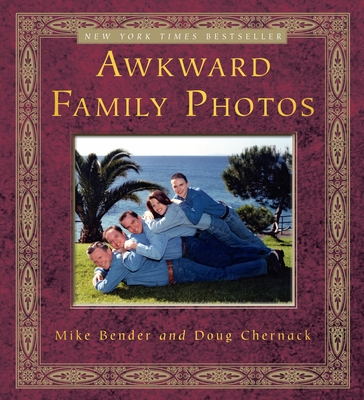 Based on the hit website, AwkwardFamilyPhotos.com (“painful, regrettable, horrifyingly awesome snaps of family bonding, you will laugh so hard that people in adjoining offices will ask what’s wrong with you”—Esquire), this full color book features never-before-seen photos and hilarious personal stories covering everything from uncomfortable moments with relatives, teen angst, sibling rivalry, and family vacations from hell. Cringe at the forced poses, bad hair, and matching outfits--all prompting us to look at our own families and celebrate the fact that we're not alone. Nothing says awkward better than an uncomfortable family photograph!

Mike Bender is the New York Times bestselling coauthor of Awkward Family Photos with Doug Chernack. He is a professional screenwriter whose credits include Not Another Teen Movie and the MTV Movie Awards. He co-created the hit website AwkwardFamilyPhotos.com in 2009 after seeing an awkward vacation photo hanging in his parents’ house. He lives in Los Angeles with his family.

Doug Chernack is the New York Times bestselling coauthor of Awkward Family Photos with Mike Bender. He is a professional screenwriter and producer who has created shows for E!, Fox Sports, and the Golf Channel and co-created the hit website AwkwardFamilyPhotos.com. Doug lives in Santa Monica, California, with his family.

"This is the best book of embarrassing and strange photos of people who look like my family that I have ever seen."
—Judd Apatow

"Being a test tube baby doesn't seem such a bad idea after looking at these folks. I laughed till it hurt. To paraphrase Tolstoy... every family is freaky in its own way. There's so much love here- but maybe a little more pain, or desperation, or bewilderment. I often feel slightly sad or guilty that I'm not closer with my own family- but looking at this bunch I sense we all have something in common and I'm far from being alone."
—David Byrne

"Awkwardness has never looked so cool.  Finally there's a book that celebrates the cringe-worthy family photo we all have buried in an album somewhere."
— Amanda Goldberg, New York Times bestselling author of Celebutantes

"Anything that both makes me laugh and think my family isn't so embarrassing deserves to be a book."
—Joel Stein, Time magazine columnist

"I wept with laughter fourteen times while reading this book and snorted aloud twice. I dare you to find a higher weep/snort ratio in any other publication."
—Karen McCullah Lutz, screenwriter of Legally Blonde and The Ugly Truth

"Awkward Family Photos is the funniest book that I've read in a long time. It reminds you that it's okay to laugh at yourself and celebrates the family that made you awkward in the first place."
—Mia Kirshner, The L Word

"Awkward Family Photos is absolutely hysterical, yet at the same time, it's a stunningly accurate photographic record of the late 20th century American family.  Now I can be certain I was not alone in my awkwardness."
—Adam Herz, Writer, American Pie I, II, III
or
Buy Here
Copyright © 2020 American Booksellers Association