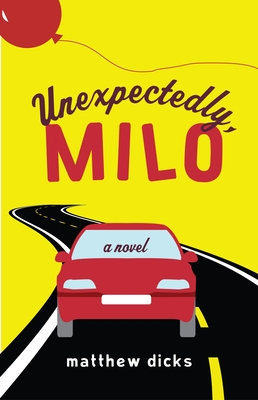 The author of SOMETHING MISSING returns with another hilarious and sneakily profound tale about a man whose behavior is truly odd, but also oddly relatable.


Milo Slade, a thirty-three year old home healthcare aide, is witnessing the rapid dissolution of his three-year marriage to a polished, high-powered attorney named Christine. Though Milo doesn't quite know the root of his marital problems, he inevitably blames himself, or more specifically, he faults the demands his obsessive compulsive personality place upon him--the need to open a jar of Smuckers grape jelly or sing 99 Luftballons in front of an audience, to name just a couple.

Yet Christine is still none the wiser about these inexplicable quirks as Milo has painstakingly hidden them from her and everyone else for years. No one knows the true--and in his mind more insidious--Milo, and such is the root of his profound loneliness, especially now that he and Christine are living apart during a trial separation.

Then one day Milo stumbles across a video camera and tapes, left behind in a park. He watches the first tape, which is a heartfelt confessional by a young woman who begins to reveal her secrets, starting small at first, and finally revealing that she blames herself for a tragic death of a friend. But not all the details add up and Milo is struck with the urge to free the sweet confessor from her guilt. He is, after all, an expert in keeping secrets…

In typical screwball fashion, Milo sets out on a cross-country journey to crack the case, but quickly gets sidetracked as his un-ignorable demands call. But it is during these sidetracks that the true meaning of his adventure takes shape. Milo is weird, but as he discovers, so is everyone else. UNEXPECTEDLY, MILO is a humorous and touching novel about finding oneself, embracing the journey, and, unexpectedly, love.

Praise For Unexpectedly, Milo: A Novel…

"An adventure of a summer read you’ll never put down."  -Daily Candy

Reading a Matthew Dicks novel always proves to be an unadulterated joy, and Unexpectedly, Milo, is no exception. Dicks’ gift lies in his ability to take superficially eccentric characters and dig beneath their peculiarities to develop full-bodied, lovable human beings. Rather than feeling gimmicky, Dicks' approach to his his characters’ off-center habits provides insight into broader truths on human nature and the things that make us tick. Readers join Milo on a riveting and tender voyage into the heart of insecurity—the fear we all carry inside us that no one will ever truly accept us for who we are. Filled with humor and sweetness, Unexpectedly, Milo reminds us that happiness can be found in the strangest of places.   --BookPage

Matthew Dicks, who is not one for long, crafted sentences, preferring the stylings of Vonnegut over those of Saramago, is an author whose works, to date, include the novels Something Missing and Unexpectedly Milo; a successful blog and a number of Op Ed pieces, all of which, at some level or another, tend to examine the outcomes of the quirky and/or rebellious individual when forced up against staid society; however, to say that he is an author is an understatement (or possibly an overstatement, since he devised a contest to compose this author bio and then chose the ramblings of a theoretical biophysicist as the winning entry), for this husband and father from Newington, CT, who has faced a number of near-death experiences, lived in his car, and been tried for a crime that he did not commit, is also an acclaimed elementary teacher who has received the Teacher of the Year Award, is the co-owner of a DJ business, and still wishes that he could beat some of his friends at golf.