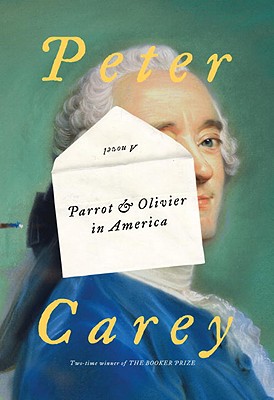 Parrot and Olivier in America

Parrot and Olivier in America has been shortlisted for the 2010 Man Booker Prize.

Olivier—an improvisation on the life of Alexis de Tocqueville—is the traumatized child of aristocratic survivors of the French Revolution. Parrot is the motherless son of an itinerant English printer. They are born on different sides of history, but their lives will be connected by an enigmatic one-armed marquis.

When Olivier sets sail for the nascent United States—ostensibly to make a study of the penal system, but more precisely to save his neck from one more revolution—Parrot will be there, too: as spy for the marquis, and as protector, foe, and foil for Olivier.

As the narrative shifts between the perspectives of Parrot and Olivier, between their picaresque adventures apart and together—in love and politics, prisons and finance, homelands and brave new lands—a most unlikely friendship begins to take hold. And with their story, Peter Carey explores the experiment of American democracy with dazzling inventiveness and with all the richness and surprise of characterization, imagery, and language that we have come to expect from this superlative writer.

Praise For Parrot and Olivier in America…

“Carey has twice won the Man Booker Prize and by all rights should be nominated for a third for Parrot and Olivier in America, a novel as big and bold as the country itself. This work showcases Carey at his finest, bringing together all his considerable strengths and obsessions . . . Carey [is] a sheer magician with language . . . He delivers a riot of unexpected plot twists and pleasures . . . An utter tour de force . . . Columbus might have discovered America, but with this new novel, Carey gives us the thrill of discovering his adopted home—our adopted home—all over again.”
—Miami Herald

“Parrot and Olivier is amusing and wise and graceful to a degree that we almost don’t deserve.”
—Laura Miller, Salon

“Peter Carey re-imagines Alexis de Tocqueville’s American journey with a verve that is nothing short of captivating. Parrot and Olivier is a rollicking debate about America and its opportunities, its society and class distinctions. Carey’s characters and landscapes breathe, resulting in a work that one hates to see come to an end . . . It is one timely work of historical fiction.”
—Denver Post

“Carey is as various, often as brilliant, and always as irreverent as they come . . . Mischievous but with a serious underlay.”
—Richard Eder, Boston Globe

“Carey braids his story carefully, lovingly. It has all his telltale favorite elements—lawlessness, revolution, hope for the future, men driven by passion. At its heart, Parrot and Olivier is a western; the simplest story in history, sculpted down to a twinkle in a philosopher's eye: Man’s search for freedom.”
—Los Angeles Times

“This is an exuberant, entertaining, incisive novel, full of attitude and incident, about ‘the great lava flow of democracy’ . . . My favorite Peter Carey book has been Jack Maggs. Now, with his bracing and often hilarious new novel, Parrot and Olivier in America, my favorite has a rival.”
—Dallas Morning News

“This masterful novel manages to be focused and intimate . . . The entertaining friction between his two alternating narrators that make this one of Carey’s best.”
—Time Out New York

“Peter Carey is a wily seducer, a mental acrobat who can bound across continents and centuries and make us believe in whatever world he has discovered and imagined. Parrot and Olivier transports us to the rough-and-tumble America of 1830, and it’s possibly the most charming and engaging novel this demon of a story-teller has yet written. His prose has never been more buoyant, more vigorous, more musical. Open this book and listen to Peter Carey sing.”
—Paul Auster

“Peter Carey’s latest imaginative and commanding tale [is] a thrillingly fresh and incisive drama of extraordinary personalities set during a time of world-altering vision and action . . . His transfixing novels are at once sharply funny and profoundly resonant . . . Brilliant.”
—Donna Seaman, Booklist, starred

“I have been reading with astonishment and envy Parrot and Olivier in America . . . Carey is a writer I prize not only for his remarkable Dickensian plots but also for the brilliance of his style . . . He is the most exuberant stylist at work in English today.”
—Edmund White, Daily Telegraph (UK)

“One of those comic masterpieces that seems effortless while making you realize that Carey writes some of the best sentences in English.”
—Tom Sleigh, New Yorker .com

Peter Carey is the author of ten previous novels and has twice received the Booker Prize. His other honors include the Commonwealth Writers' Prize and the Miles Franklin Literary Award. Born in Australia, he has lived in New York City for twenty years.