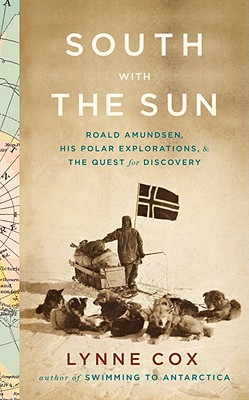 South with the Sun

Roald Amundsen, His Polar Explorations, and the Quest for Discovery

Roald Amundsen, “the last of the Vikings,” left his mark on the Heroic Era as one of the most successful polar explorers ever.

A powerfully built man more than six feet tall, Amundsen’s career of adventure began at the age of fifteen (he was born in Norway in 1872 to a family of merchant sea captains and rich ship owners); twenty-five years later he was the first man to reach both the North and South Poles.

Lynne Cox, adventurer and swimmer, author of Swimming to Antarctica (“gripping” —Sports Illustrated) and Grayson (“wondrous, and unforgettable” —Carl Hiaasen), gives us in South with the Sun a full-scale account of the explorer’s life and expeditions.

We see Amundsen, in 1903-06, the first to travel the Northwest Passage between the Atlantic and Pacific Oceans, in his small ship Gjøa, a seventy-foot refitted former herring boat powered by sails and a thirteen-horsepower engine, making his way through the entire length of the treacherous ice bound route, between the northern Canadian mainland and Canada’s Arctic islands, from Greenland across Baffin Bay, between the Canadian islands, across the top of Alaska into the Bering Strait. The dangerous journey took three years to complete, as Amundsen, his crew, and six sled dogs waited while the frozen sea around them thawed sufficiently to allow for navigation.
We see him journey toward the North Pole in Fridtjof Nansen’s famous Fram, until word reached his expedition party of Robert Peary’s successful arrival at the North Pole. Amundsen then set out on a secret expedition to the Antarctic, and we follow him through his heroic capture of the South Pole.

Cox makes clear why Amundsen succeeded in his quests where other adventurer-explorers failed, and how his methodical preparation and willingness to take calculated risks revealed both the spirit of the man and the way to complete one triumphant journey after another.

Crucial to Amundsen’s success in reaching the South Pole was his use of carefully selected sled dogs. Amundsen’s canine crew members—he called them “our children”—had been superbly equipped by centuries of natural selection for survival in the Arctic. “The dogs,” he wrote, “are the most important thing for us. The whole outcome of the expedition depends on them.” On December 14, 1911, Roald Amundsen and four others, 102 days and more than 1,880 miles later, stood at the South Pole, a full month before Robert Scott.

Lynne Cox describes reading about Amundsen as a young girl and how because of his exploits was inspired to follow her dreams. We see how she unwittingly set out in Amundsen’s path, swimming in open waters off Antarctica, then Greenland (always without a wetsuit), first as a challenge to her own abilities and then later as a way to understand Amundsen’s life and the lessons learned from his vision, imagination, and daring.

South with the Sun—inspiring, wondrous, and true—is a bold adventure story of bold ambitious dreams.

Lynne Cox has set records all over the world for open-water swimming. She is the author of "Swimming to Antarctica" and "Grayson" and lives in Los Alamitos, California.
Loading...
or
Not Currently Available for Direct Purchase