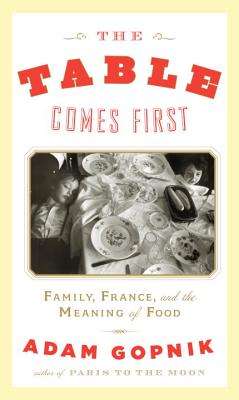 Family, France, and the Meaning of Food

Never before have we cared so much about food. It preoccupies our popular culture, our fantasies, and even our moralizing—“You still eat meat?” With our top chefs as deities and finest restaurants as places of pilgrimage, we have made food the stuff of secular seeking and transcendence, finding heaven in a mouthful. But have we come any closer to discovering the true meaning of food in our lives?

With inimitable charm and learning, Adam Gopnik takes us on a beguiling journey in search of that meaning as he charts America’s recent and rapid evolution from commendably aware eaters to manic, compulsive gastronomes. It is a journey that begins in eighteenth-century France—the birthplace of our modern tastes (and, by no coincidence, of the restaurant)—and carries us to the kitchens of the White House, the molecular meccas of Barcelona, and beyond. To understand why so many of us apparently live to eat, Gopnik delves into the most burning questions of our time, including: Should a Manhattanite bother to find chicken killed in the Bronx? Is a great vintage really any better than a good bottle of wine? And: Why does dessert matter so much?

Throughout, he reminds us of a time-honored truth often lost amid our newfound gastronomic pieties and certitudes: What goes on the table has never mattered as much to our lives as what goes on around the table—the scene of families, friends, lovers coming together, or breaking apart; conversation across the simplest or grandest board. This, ultimately, is who we are.

Following in the footsteps of Jean Anthelme Brillat-Savarin, Adam Gopnik gently satirizes the entire human comedy of the comestible as he surveys the wide world of taste that we have lately made our home. The Table Comes First is the delightful beginning of a new conversation about the way we eat now.

Praise For The Table Comes First: Family, France, and the Meaning of Food…

“Adam Gopnik brilliantly weaves together the history, philosophy, and culture of food with his deep passion for cooking and the shared pleasures of the table. Anyone who roasts a chicken at home or eats chocolate mousse in a restaurant will be forever changed by this book. I loved it!”
—Ina Garten

“I need to read anything that Adam Gopnik writes, and this book on food, eating and—it follows—life is a particular feast. His acuity, grace, sensitive intelligence (in short, his brilliance) are, as ever, dazzlingly displayed and yet with the lightest of touches.”
—Nigella Lawson

“Gopnik would surely be the world’s greatest dinner guest; he can make any subject fascinating, and always backs up his curiosity with unhurried research and an acute eye for the telling detail. As the number of TV cooking shows piles up faster than the empty Pop-Tart wrappers in my kitchen, it’s time to ask: Why is the world so fixated on food? Gopnik explores the origins of restaurants, recipes and other grub-centered rituals.”
—Julia Keller, Chicago Tribune

“The perfect book for any intellectual foodie, a delicious book packed with so much to sink your teeth into”
—Padma Lakshmi, author, actress, model and host of the Emmy-winning Top Chef

“Adam Gopnik’s The Table Comes First: France, Family, and the Meaning of Food indulges gourmands everywhere . . . In Gopnik’s distinctive style, it is encyclopedic yet personal and funny, and it drives at deeper truths . . . His story is more ambitious than a history of restaurants—it’s about how we taste, dream, and argue about food. He explores the extremes of strict localism (exhibit A: Brooklyn tilapia). He gets into the heads of apparent adversaries—the meatless crowd and the whole-beast fiends, the Slow Food and molecular movements, the New and Old World wine advocates—and gives each its place in the grand foodie pantheon . . . Gopnik’s take on what makes eating glorious is at once sweeping and intimate.”
—Tracy McNicoll, Newsweek


“Adam Gopnik’s writing about food is highly intellectual and profoundly witty, while also being warm and personal and rooted in common sense. He thinks hard about the routines of the table, and makes you think too.”
—John Lanchester, author, The Debt to Pleasure

And praise from the UK:

“As a dauntless Francophile, a doting father, and a dedicated foodie, Gopnik joins a distinguished corps of essayists who have dedicated themselves to the important subject of gastronomy . . . He possesses the happy knack of combining intellectual curiosity with a quotidian interest in humanity and writes with intelligence, wit, and grace about culinary quiddities and contradictions. From the first restaurants to appear in 18th-century France to fast-food joints, Gopnik unfurls his napkin and tucks in.”
—Iain Finlayson, The Times (London)

”The Table Comes First is a pleasantly odd, heterogeneous book that never allows itself to be confined by the boundaries of its gastronomical theme. It presents a lavish buffet of history, autobiography, reportage and philosophy, among various other forms . . . One of the main pleasures of The Table Comes First is the way in which Gopnik continually manages to write about food while also gesturing towards larger themes and concerns: family, economics, philosophy, literature, ideas of justice and what it might mean to live a good life . . . Wonderfully eloquent and insightful . . .”
—Mark O’Connell, Sunday Business Post (Ireland)

”A compelling read about how cooking practices change with every generation, The Table Comes First should be on the shelves of all food enthusiasts. Gopnik explores culinary history, from 19th-century Parisian fine dining to our modern concern with sustainable food.”
—Stella magazine

“He has a voice that is by turns conversational and dandyish, fancy about everyday pleasures (sport, food) and defiantly unawed about those subjects that are supposed to matter more (art, philosophy) . . . These are personal essays in the fullest sense of the word, sieving the big subjects of the book’s subtitle—family, France, food—through one man’s well-furnished mind.”
—Kathryn Hughes, The Guardian

“Adam Gopnik is the nearest thing there is—in the English-speaking world, at any rate—to a philosopher of food . . . [T]hese essays blend enormous erudition with great elegance of expression, and pack intellectual firepower too . . . Gopnik wants us to take food seriously, to believe that the table comes first. At the same time, he wants us to remember that food matters only in so far as we connect it with the broader project of living well, of staying at home with ‘our pleasures as much as our principles’ . . . These essays are a reminder that gastronomy, in order to be profound, must also know its place.”
—William Skidelsky, New Statesman

Author of the beloved best seller "Paris to the Moon, "Adam Gopnik has been writing for "The New Yorker" since 1986. He is a three-time winner of the National Magazine Award for Essays and for Reviews and Criticism and of the George Polk Award for Magazine Reporting. He lives in New York City with his wife and their two children.
Loading...
or
Not Currently Available for Direct Purchase