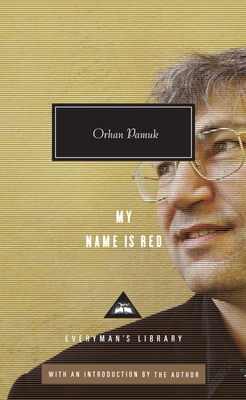 One of the Nobel Prize winner’s best-loved novels, in a special edition featuring an introduction by the author and a chronology of Islamic and Western art history that provides additional context for this dazzling story of a murdered artist in sixteenth-century Istanbul.

Nobel-Prize winner Orhan Pamuk's My Name Is Red, set amid the artistic splendor and religious intrigue of sixteenth-century Istanbul, is a fantastical story of love and murder propelled by the philosophical puzzle at its core.

The Ottoman sultan has commissioned the most acclaimed artists in the land to create a great book celebrating the glories of his realm--but he wants them to illuminate it in the European style. Because there are those who believe art that imitates the real is an affront to Islam, the project must be kept secret. Panic and scandal erupt when one of the chosen miniaturists disappears, along with a crucial page of the manuscript. the surviving artists--bitter rivals variously motivated by pride, greed, faith, and love--are all under suspicion of murder, and the only clue to the mystery lies in the half-finished illustrations themselves.

“Pamuk is a novelist and a great one . . . [Readers will] be lofted by the paradoxical lightness and gaiety of the writing, by the wonderfully winding talk perpetually about to turn a corner, and by the stubborn humanity in the characters’ maneuvers to survive. It is a humanity whose lies and silences emerge as endearing and oddly bracing individual truths.” —Richard Eder, The New York Times Book Review

Orhan Pamuk was awarded the Nobel Prize in Literature in 2006. The author of The Museum of Innocence, Istanbul, and Snow, he lives in Istanbul and New York City.
Loading...
or support indie stores by buying on
(This book is on backorder)