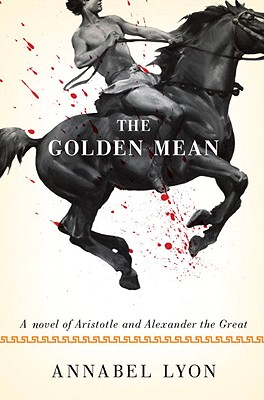 A startlingly original first novel by “this generation’s answer to Alice Munro” (The Vancouver Sun)—a bold reimagining of one of history’s most intriguing relationships: between legendary philosopher Aristotle and his most famous pupil, the young Alexander the Great.

342 BC: Aristotle is reluctant to set aside his own ambitions in order to tutor Alexander, the rebellious son of his boyhood friend Philip of Macedon. But the philosopher soon comes to realize that teaching this charming, surprising, sometimes horrifying teenager—heir to the Macedonian throne, forced onto the battlefield before his time—is a necessity amid the ever more sinister intrigues of Philip’s court.

Told in the brilliantly rendered voice of Aristotle—keenly intelligent, often darkly funny—The Golden Mean brings ancient Greece to vivid life via the story of this remarkable friendship between two towering figures, innovator and conqueror, whose views of the world still resonate today.

Annabel Lyon's story collection, "Oxygen, "and book of novellas, " The Best Thing for You," were published in Canada to wide acclaim. "The Golden Mean," her first novel, is a Canadian best seller and is being published in six languages. It won the Rogers Writers' Trust Fiction Prize and was nominated for the Scotiabank Giller Prize, the Governor General's Award for Fiction, and the Commonwealth Writers' Prize. Lyon lives in British Columbia with her husband and two children.

Praise For The Golden Mean…

“It is testament to Lyon’s talent that she has shaped history into a narrative not only gripping, but also accessible and poignant, even tender . . . Beautifully researched and written . . . A novel that is brave enough to raise the universal questions about how a man should live his life [and] that describes with amazing authority the flaws and growth of one of our greatest philosophers as well as his famous student . . . What could be more relevant to our own troubled times?”
—Boston Globe

“A splendidly intelligent and entertaining novel about the ancient world . . . Here’s a story that gives us the classical world with everyday liveliness and narrative force, without ever sacrificing intellectual integrity and historical accuracy.”
—Alan Cheuse, NPR/All Things Considered

“A sensational first novel . . . Not to be missed . . . While The Golden Mean is beautifully written, its compressed prose both fleet and rhythmic, the novel’s pleasures are closer to those of Robert Graves’s I, Claudius, or even the historical pot boilers of Ken Follett . . . [It] hooked me as a first novel should, carried me along, and left me determined to read whatever the author writes next.”
—The Daily Beast (Must-Read Debuts)

“The Golden Mean is more than a brilliant and beautifully told novel: it’s also a profound exploration of moral and philosophical issues that have troubled and perplexed us since Aristotle.”
—Russell Banks, author of The Reserve

“It takes chutzpah to make your main characters Aristotle and Alexander the Great, but Lyon pulls it off; she has the gift of finding the pulse of the ancient world and bringing it back to glorious life . . . Gripping, with a powerful sense of time and place.”
—The Times (UK)

“Ancient Greece, in all its gusto, gore, and glory, springs vividly to life in Lyon’s pitch-perfect paean to Aristotle and Alexander the Great . . . Lyon’s ability to penetrate the mind and convincingly articulate the thoughts and emotions of one of the greatest intellects of all time is absolutely astounding.”
—Booklist

“The 4th century BC and the youth of Alexander the Great are marvellously reimagined in Lyon’s justifiably garlanded novel . . . The daily intrigues of the court, the visceral aspects of battle, philosophical discussion, and Aristotle’s household are all evoked in measured, burnished prose, which combines thrilling immediacy with a stately timelessness. Aristotle’s black moods and Alexander’s probable latent psychosis in particular are fascinatingly drawn.”
—Guardian (UK)

“Few writers would dare to employ Aristotle as their narrator but Annabel Lyon has done exactly this in her extraordinary novel The Golden Mean. In thoughtful and controlled prose that never fails to grip, Lyon presents an unexpected portrait of the young Alexander the Great, a fascinating recreation of Plato’s Academy and brings the ancient world back to life with a splendour I haven’t seen since I, Claudius. A triumph of erudition and story-telling.”
—John Boyne, author of The Boy in the Striped Pajamas

“A richly imagined and engrossing novel . . . In Lyon’s capable hands, the intense battle of wills between student and teacher, philosopher and ambitious warrior prince, is arresting and original . . . A flawlessly drawn world . . . A moving and illuminating historical novel that can stand proudly alongside the works of Mary Renault.”
—Shelf Awareness

“The harsh light of the classical world is prone to bleach away all humanity and leave only the bare outline of myth. Not so in Annabel Lyon’s The Golden Mean, in which Aristotle is haunted by agonies of the flesh and spirit, and Alexander, his most famous pupil, struggles to be Olympian despite a murderous nature and merely human powers.”
—Zachary Mason, author of The Lost Books of the Odyssey

“Lyon captures Aristotle’s voice so gracefully I sometimes thought I was reading a memoir rather than a work of fiction . . . Along with food for thought, The Golden Mean is filled with charming dialogue, colorful and dynamic characters, lush description, moments of deep sadness, love, sex, humor (often dark), and so much more, giving the book the chops to appeal to nearly any reader looking for a rich read.”
—Bookpleasures.com

“Remarkable . . . Lyon explores and develops the relations between [Aristotle and Alexander] with uncommon sensitivity and skill . . . The Golden Mean does beautifully what the best historical novels do. It recreates a past time whose manners are different from ours; yet it shows what is permanent in human nature . . . This is an outstanding novel, admirably structured, economical and evocative, keenly intelligent, amusing and sad—a book in which imagination and intellect are yoked in harmony.”
—The Scotsman (UK)

“The Golden Mean is an extraordinary achievement . . . Lyon portrays the relationship between Aristotle and Alexander with great subtlety, carefully investing their characters with perfectly judged light and shade . . . With her sensuous prose, rich imagery and meticulous attention to detail, Lyon has brushed the cobwebs of ages from two of history’s most charismatic characters and brought them gloriously to life.”
—Yorkshire Evening Post (UK)

“This is a pitch perfect, even dazzling debut novel . . . Historical fiction at its best . . . Lyon authoritatively evokes a fabled time and place in the urbane and dry voice of the man judged the smartest of his age.”
—Montreal Gazette

“A wonderful book—an enthralling page-turner with deeply realized characters. [It] echoes right up to modern times, in spite of its ancient setting . . . A taut, polished novel that will hold your attention from start to finish . . . Funny, thought-provoking, sensual, and suspenseful.”
—Vancouver Sun

“The best books are those that steal up on you, and lead you gently into a world made real, not by an abundance of detail, but by honestly rendered characters that, from the very first page, so completely captivate that before you know it, you’ve read half the book and there are but a few hours until dawn . . . The Golden Mean is such a book.”
—MostlyFiction.com