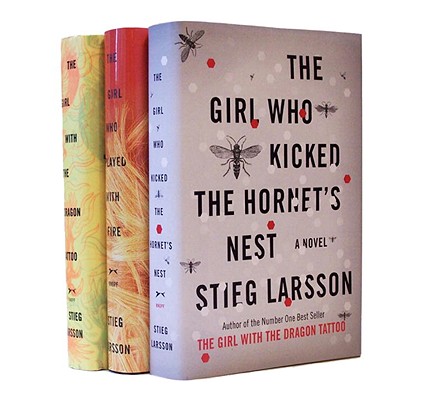 Stieg Larsson's Millennium Trilogy is now available in a complete hardcover set.
"
"All across America, readers are talking about Stieg Larsson's best-selling novels, set in Sweden and featuring Lisbeth Salander--"one of the most original and memorable heroines to surface in a recent thriller" "(The New York Times). "The trilogy is""an international sensation that will grab you and keep you "reading with eyes wide open" "(San Francisco Chronicle)." " It] is intricately plotted, lavishly detailed but written with a breakneck pace and verve" "(The Independent, "U.K.), but "be warned: the trilogy is seriously addictive." "(The Guardian, "U.K.).
"Believe the hype . . . It's gripping stuff."
--"People
""Stieg Larsson clearly loved his brave misfit Lisbeth. And so will you."
--"USA Today
""Larsson has bottled lightning."
--"Los Angeles Times
"
The Girl with the Dragon Tattoo
Harriet Vanger, a scion of one of Sweden's wealthiest families disappeared without a trace more than forty years ago. All these years later, her aged uncle continues to try to discover what happened to her. He hires Mikael Blomkvist, a journalist recently sidelined by a libel conviction, to investigate. Blomkvist is aided by the pierced and tattooed computer prodigy Lisbeth Salander. Together they tap into a vein of unfathomable iniquity and astonishing corruption on their way to discovering the truth of Harriet Vanger's fate.
The Girl Who Played with Fire
Mikael Blomkvist, now the crusading publisher of the magazine "Millennium, " has decided to run a story that will expose an extensive sex trafficking operation. On the eve of its publication, the two reporters responsible for the article are murdered, and the fingerprints found on the murder weapon belong to his friend Lisbeth Salander. Blomkvist, convinced of Salander's innocence, plunges into an investigation of the murders. Meanwhile, Salander herself is drawn into a murderous game of cat and mouse, which forces her to face her dark past.
The Girl Who Kicked the Hornet's Nest
Lisbeth Salander lies in critical condition, a bullet wound to her head, in the intensive care unit of a Swedish city hospital. She's fighting for her life in more ways than one: if and when she recovers, she'll be taken back to Stockholm to stand trial for three murders. With the help of Mikael Blomkvist, she will not only have to prove her innocence, but also identify and denounce those in authority who have allowed the vulnerable, like herself, to suffer abuse and violence. On her own, she will plot revenge--against the man who tried to kill her, and against the corrupt government institutions that very nearly destroyed her life.
"
""Unique and fascinating . . . Like a blast of cold, fresh air."--"Chicago Tribune
""Wildly suspenseful . . . Intelligent, ingeniously plotted, utterly engrossing."
--"The Washington Post
""A gripping, stay-up-all-night read." --"Entertainment Weekly"
"
""Dynamite." --"Variety
"

Stieg Larsson, who lived in Sweden, was the editor in chief of the magazine "Expo" and a leading expert on antidemocratic, right-wing extremist and Nazi organizations. He died in 2004, shortly after delivering the manuscripts for "The Girl with the Dragon Tattoo, The Girl Who Played with Fire, " and "The Girl Who Kicked the Hornet's Nest."
or
Not Currently Available for Direct Purchase
Copyright © 2020 American Booksellers Association