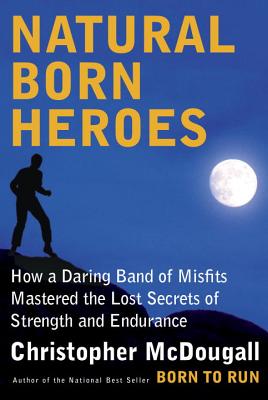 The best-selling author of Born to Run now travels to the Mediterranean, where he discovers that the secrets of ancient Greek heroes are still alive and well on the island of Crete, and ready to be unleashed in the muscles and minds of casual athletes and aspiring heroes everywhere.

After running an ultramarathon through the Copper Canyons of Mexico, Christopher McDougall finds his next great adventure on the razor-sharp mountains of Crete, where a band of Resistance fighters in World War II plotted the daring abduction of a German general from the heart of the Nazi occupation. How did a penniless artist, a young shepherd, and a playboy poet believe they could carry out such a remarkable feat of strength and endurance, smuggling the general past thousands of Nazi pursuers, with little more than their own wits and courage to guide them?

McDougall makes his way to the island to find the answer and retrace their steps, experiencing firsthand the extreme physical challenges the Resistance fighters and their local allies faced. On Crete, the birthplace of the classical Greek heroism that spawned the likes of Herakles and Odysseus, McDougall discovers the tools of the hero—natural movement, extraordinary endurance, and efficient nutrition. All of these skills, McDougall learns, are still practiced in far-flung pockets throughout the world today.

More than a mystery of remarkable people and cunning schemes, Natural Born Heroes is a fascinating investigation into the lost art of the hero, taking us from the streets of London at midnight to the beaches of Brazil at dawn, from the mountains of Colorado to McDougall’s own backyard in Pennsylvania, all places where modern-day athletes are honing ancient skills so they’re ready for anything.

Just as Born to Run inspired readers to get off the treadmill, out of their shoes, and into the natural world, Natural Born Heroes will inspire them to leave the gym and take their fitness routine to nature—to climb, swim, skip, throw, and jump their way to their own heroic feats.

Christopher McDougall is the author of Born to Run: A Hidden Tribe, Superathletes, and the Greatest Race the World Has Never Seen. He began his career as an overseas correspondent for the Associated Press, covering wars in Rwanda and Angola. He now lives and writes (and runs, swims, climbs, and bear-crawls) among the Amish farms around his home in rural Pennsylvania.

Praise For Natural Born Heroes: How a Daring Band of Misfits Mastered the Lost Secrets of Strength and Endurance…

“A mash note to physical endurance. . . . McDougall redefines the heroic ideal, establishing heroism as a skill set rather than a virtue. . . . [And] schools the reader in the art of the champion. . . . The essential narrative here, the twisty tale of a kidnapping that incredibly goes right, is exciting. It is balanced out with the journalistic account of McDougall’s entry into the world of the hero. His personal quest to ‘rewild the psyche’ might seem an awkward fit with war storytelling. But under McDougall’s sure hand the combination improbably works. Kind of like kidnapping a German general on an island swarming with Nazi troops.” —NPR Books

“A heady confection that encompasses, among other subjects, military history, archaeology, Greek mythology, neat ways to kill a man and ideas on health and fitness that might just change your life. . . . [McDougall] constructs a fascinating edifice of ideas . . . and eventually finds a modern-day hero of his own. But the pleasures of the book are as much to do with the fascinating panoply of characters, war heroes all, British, Commonwealth and Cretan, whose exploits contributed so much to Hitler's downfall.” —The Independent (London)

“In the thoroughly absorbing Natural Born Heroes, which tracks heroism from the times of Zeus and Odysseus to the World War II bravery of a motley crew of fighters, Christopher McDougall makes it clear that . . . heroes, both ancient and modern, are not somehow supernaturally endowed after all. Indeed, they may come by their skills quite naturally. . . . His extensive knowledge of fitness training, nutrition and physiology winds artfully around a tale of superhuman resistance during the Nazi occupation of the Greek island of Crete. . . . [McDougall] solves this mystery with a witty eye for every detail, inspiring his own captive audience along the way.” — BookPage (The Top Pick of the Month: Nonfiction)

“Compelling . . . engaging . . . provocative . . . with inquiries into the nature of heroism. . . . True heroism, as the ancients understood, isn’t about strength or boldness or even courage. It’s about compassion.” —Kirkus Reviews

“Riveting. . . . A well-done recounting of a truly heroic episode of WWII. . . . In absorbing detail, McDougall describes how . . . ‘ordinary’ men who were far from stereotypically tough, battle-hardened warriors . . . trekked across tortuous mountain terrain while avoiding a massive German dragnet..” —Booklist
or
Not Currently Available for Direct Purchase
Copyright © 2020 American Booksellers Association