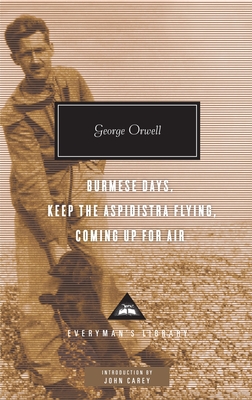 For the first time in one hardcover volume—three classic novels by the author of Nineteen Eighty- Four and Animal Farm.

The lushly descriptive and tragic Burmese Days, a devastating indictment of British colonial rule, is based on Orwell’s own experience while serving in the Indian Imperial Police. His beloved satirical classic, Keep the Aspidistra Flying, features a young idealist whose attempt to rebel against middle-class respectability—by working in a bookshop and trying to be a writer—goes terribly and comically awry. The hero of Coming Up for Air tries to escape the bleakness of suburbia by returning to the idyllic rural village of his childhood—only to find that the simpler England he remembers so nostalgically is gone forever.

These three novels share Orwell’s unsparing vision of the dark side of modern capitalist society in combination with his comic brilliance and his unerring compassion for humanity.

John Carey is Emeritus Professor of English Literature at Oxford and a Fellow of the British Academy.
Loading...
or
Not Currently Available for Direct Purchase