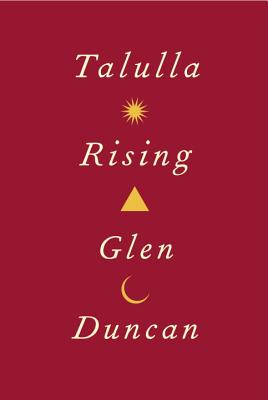 When I change I change fast. The moon drags the whatever-it-is up from the earth and it goes through me with crazy wriggling impatience . . . I’m twisted, torn, churned, throttled—then rushed through a blind chicane into ludicrous power . . . A heel settles. A last canine hurries through. A shoulder blade pops. The woman is a werewolf.

The woman is Talulla Demetriou.
She’s grieving for her werewolf lover, Jake, whose violent death has left her alone with her own sublime monstrousness. On the run, pursued by the hunters of WOCOP (World Organisation for the Control of Occult Phenomena), she must find a place to give birth to Jake’s child in secret.
The birth, under a full moon at a remote Alaska lodge, leaves Talulla ravaged, but with her infant son in her arms she believes the worst is over—until the windows crash in, and she discovers that the worst has only just begun . . .
What follows throws Talulla into a race against time to save both herself and her child as she faces down the new, psychotic leader of WOCOP, a cabal of blood-drinking religious fanatics, and (rumor has it) the oldest living vampire.
Harnessing the same audacious imagination and dark humor, the same depths of horror and sympathy, the same full-tilt narrative energy with which he crafted his acclaimed novel The Last Werewolf, Glen Duncan now gives us a heroine like no other, the definitive twenty-first-century female of the species.

“The horror genre at its best—wildly imaginative, written with wit and intelligence, wickedly entertaining.”
—The Times (UK)

“Irresistible . . . As with The Last Werewolf, Duncan writes with caustic edge and pop-culturally relevant humor . . . His gorgeous prose makes these books more than just werewolf-genre flashes in the proverbial pan.”
—Dallas Morning News

“Duncan’s writing does more than transcend genre fiction: it creeps up on it in the dead of night, rips out its heart, then eats it. There is something liberating about a novel like this. As well as offering a new vantage point from which to consider the old questions of life, it also provides a welcome fantasy in which there is not just extreme sex and violence, but also smoking, drinking, and a lot of very fancy hotels . . . Who wouldn’t want to be part of their world for a while? . . . As well as being thought-provoking, it’s all great fun.”
—The Guardian (UK)

“Duncan’s antihero is an apex female predator . . . She’s smart, confident, and a caring mother. She’s also a ferocious man-eater . . . The spectacle alone is worth the price of admission.”
—NPR.org

“Adventurous readers who are looking for a break from the usual beach read should consider this alternately horrifying and humorous, imaginative and energetic novel.”
—CNN.org

“Duncan is an immensely talented literary novelist, and with Talulla Rising, he has again proved you don’t have to be driving with a learner’s permit to enjoy a good vampire-versus-werewolf book.”
—Richmond Times-Dispatch

“A bone-crunchingly, page-plungingly good book (necessary reading just for the language) that limns the primal darkness within us but is ultimately about love . . . Highly recommended.”
—Library Journal (starred)

“A lusty, visceral, bloody tale [told in] capable, muscular prose . . . This is enjoyable stuff . . . Duncan’s werewolves are never cartoons . . . Talulla has the wit and pluck to entertain us.”
—Cleveland Plain Dealer

“[A] terrific anti-Twilight werewolves-versus-vampires saga continues . . . This is pulp fiction but of the highest order . . . It all takes place in a wonderfully constructed universe of hipster philosophy, hard-bitten humour, just enough arcane mystery, and a whole load of Tarantino-Technicolor sex and violence. As before, there’s substance beyond the flippancy, an unlaboured consideration of the beast within us all, and though beneath the wolf’s clothing lies the purringly efficient machinery of a really good thriller, it goes way beyond genre writing.”
—Word magazine (UK)

“Both brainy and vicious.”
—Kirkus Reviews

“The sequel to Duncan’s excellent The Last Werewolf, Talulla Rising returns to the dark and humorous world that made the earlier novel such a triumph . . . Duncan’s novel is that rare and wonderful creature—literary horror . . . Duncan shows us just how vital [the werewolf tale] can be . . . filled with an irony that speaks to our complicated and troubled times.”
—Sydney Morning Herald (Australia)

“A fearsomely good book, mainly because Talulla is such a poignant outsider and formidable heroine.”
—Metro (UK)

“An enthralling look into the heart of newfound monstrosity . . . Lavish, dark, and deliciously campy.”
—Booklist

Glen Duncan is the author of eight previous novels. He was chosen by both "Arena "and "The Times Literary Supplement "as one of Britain's best young novelists. He lives in London.
Loading...
or
Not Currently Available for Direct Purchase