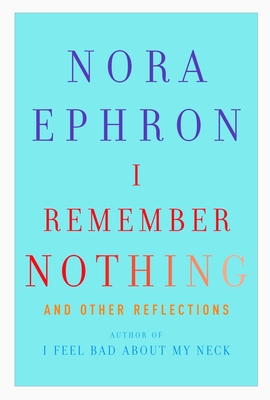 NATIONAL BESTSELLER • Here is the beloved, bestselling author of I Feel Bad About My Neck at her funniest, wisest, and best, taking a hilarious look at the past and bemoaning the vicissitudes of modern life—and recalling with her signature clarity and wisdom everything she hasn’t (yet) forgotten.

In these pages she takes us from her first job in the mailroom at Newsweek to the six stages of email, from memories of her parents’ whirlwind dinner parties to her own life now full of Senior Moments (or, as she calls them, Google moments), from her greatest career flops to her most treasured joys.

Filled with insights and observations that instantly ring true, I Remember Nothing is a delightful, poignant gift from one of our finest writers.

Praise For I Remember Nothing: and Other Reflections…

“At 69, she’s just two years older than Keith Richards, but to hear her tell it, Ephron’s recall’s far worse. Luckily some synapses are still firing: The follow-up to I Feel Bad About My Neck includes chapters on her youth and career and drily hilarious musings on the trials of aging. If we have to grow old (and as they say, consider the alternative) there’s no better guide.”
—People Magazine (Top 10 Books of 2010)