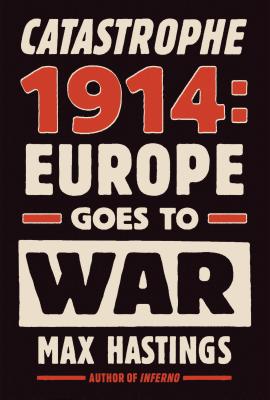 From the acclaimed military historian, a new history of the outbreak of World War I: the dramatic stretch from the breakdown of diplomacy to the battles—the Marne, Ypres, Tannenberg—that marked the frenzied first year before the war bogged down in the trenches.

In Catastrophe 1914, Max Hastings gives us a conflict different from the familiar one of barbed wire, mud and futility. He traces the path to war, making clear why Germany and Austria-Hungary were primarily to blame, and describes the gripping first clashes in the West, where the French army marched into action in uniforms of red and blue with flags flying and bands playing. In August, four days after the French suffered 27,000 men dead in a single day, the British fought an extraordinary holding action against oncoming Germans, one of the last of its kind in history. In October, at terrible cost the British held the allied line against massive German assaults in the first battle of Ypres. Hastings also re-creates the lesser-known battles on the Eastern Front, brutal struggles in Serbia, East Prussia and Galicia, where the Germans, Austrians, Russians and Serbs inflicted three million casualties upon one another by Christmas.

As he has done in his celebrated, award-winning works on World War II, Hastings gives us frank assessments of generals and political leaders and masterly analyses of the political currents that led the continent to war. He argues passionately against the contention that the war was not worth the cost, maintaining that Germany’s defeat was vital to the freedom of Europe. Throughout we encounter statesmen, generals, peasants, housewives and private soldiers of seven nations in Hastings’s accustomed blend of top-down and bottom-up accounts: generals dismounting to lead troops in bayonet charges over 1,500 feet of open ground; farmers who at first decried the requisition of their horses; infantry men engaged in a haggard retreat, sleeping four hours a night in their haste. This is a vivid new portrait of how a continent became embroiled in war and what befell millions of men and women in a conflict that would change everything.

“The political and chattering classes are right to be worried: if any region today could cause a crisis comparable to that of 1914, it is the Middle East. They need a new book on the outbreak of World War I, and now they have it in Catastrophe 1914: Europe Goes to War.  [Hastings is] an outstanding historian . . . a victorious foray . . . Tuchman has been supplanted.”
—Hew Strachan, The New York Times

“[World War I’s] centennial is almost upon us.  Among the resulting flood of books, it’ll be hard to find one better than this early entry . . . absorbing and compulsively readable . . . Like an eagle soaring over this vast terrain, Hastings swoops in and out, spying broad features and telling details alike . . . superb.”
—Alan Cate, The Cleveland Plain Dealer

“Hastings over the past two decades has become the contemporary premier historian of 20th-century war . . . The real strength of this story is how Mr. Hastings portrays the principal characters, not as stereotyped tyrants, greedy empire builders or mindless militarists, but rather as very real human beings with as many flaws as virtues . . .Will the past be prologue?  Get this book.”
—James Srodes, Washington Times

“Hastings is in top form . . . a lively and opinionated account . . . one that lacks the romanticism that can bedevil military history. There's nothing sentimental about his version of events. His vivid rendering of the first months of a cataclysm that grows more distant with each passing year makes the book a worthy addition to the canon.”
—Meredith Hindley, The Christian Science Monitor

“What makes this book really stand out is Mr. Hastings’ deliberate efforts to puncture what he labels the many myths and legends of the events of 1914 . . . excellent . . . His deep research, insightful analysis, and wonderful prose make this an excellent addition to his long library of titles. This volume is a highly readable account of a war Europe completely misjudged in terms of bloodshed and cost—a war that destroyed three dynasties, remade the map of Europe and set the state for mankind’s bloodiest century.”
—Jerry Lenaburg, New York Journal of Books

“Like one of Field Marshal Haig’s family whiskies, Max Hastings is a dram that steadily improves with age . . . his position as Britain’s leading military historian is now unassailable . . . enormously impressive . . . Hastings effortlessly masters the complex lead-up to and opening weeks of the First World War . . . magisterial . . . Hastings soars across frontiers to take in every theatre, describing half-forgotten campaigns on the Drina and Danube rivers with the same verve and élan that he brings to the more familiar clashes at Mons, Le Cateau, the Marne and Ypres . . . But it is the voices of ordinary folk that resonate loudest and longest . . . This is a magnificent and deeply moving book, and with Max Hastings as our guide we are in the hands of a master.”
—Nigel Jones, The Telegraph (UK)

“Hastings argues persuasively that the war's opening phase had a unique character that merits closer study . . . Hastings ends his deft narrative and analysis by observing that the price of German victory would have been European democracy itself. Those who died to prevent that victory—despite the catastrophic decisions of 1914—did not die in vain.”
—William Anthony Hay, The Wall Street Journal

“Does the world need another book on that dismal year? Absolutely, if it’s by Hastings . . . splendid . . . Readers accustomed to Hastings’ vivid battle descriptions, incisive anecdotes from all participants, and shrewd, often unsettling opinions will not be disappointed. Among the plethora of brilliant accounts of this period, this is one of the best.”
—Kirkus, starred review

“[I]nvites consideration as the best in his distinguished career, combining a perceptive analysis of the Great War's beginnings with a vivid account of the period from August to September of the titular year.”
—Publishers Weekly

“A year ahead of the centenary of the Great War comes this howitzer of an offering from Max Hastings, who has skilfully blended new first-hand material from peasants and housewives to generals and emperors into a seamless, vivid and compelling narrative . . . [Hastings’s] quest, he tells us, is to answer the question: ‘What happened to Europe in 1914?’ He achieves this with aplomb . . . a seamless, vivid and compelling pan-European narrative . . . Hastings is a master of the pen portrait and the quirky fact . . . [H]is greatness as a historian — never shown to better effect than in this excellent book — lies in his willingness to challenge entrenched opinion and say what needs to be said.”
—Saul David, London Evening Standard (UK)

“[C]ompelling . . . Hastings will have no truck with the idea that a chapter of accidents brought about the war, or with any liberal, guilt-ridden guff about equal moral and political responsibility of the warring belligerents . . . [T]old with an equal richness of detail and sure narrative sweep . . . [A] formidably impressive book.”
—David Crane, The Spectator (UK)

Max Hastings is the author of more than twenty books, most recently Inferno: The World at War, 1939–1945. He spent his early career as a foreign correspondent for BBC TV and various newspapers, then as editor of Britain’s Evening Standard and Daily Telegraph. He has received numerous awards for both his books and his journalism. He lives in the English countryside west of London.