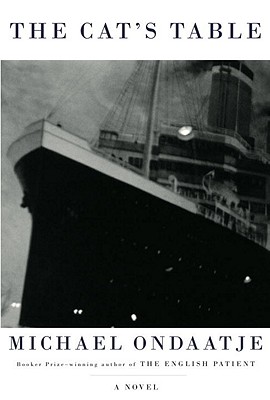 “In a story of intricate delicacy and beauty, Ondaatje not only tells the wondrous story of three boys at sea -- a journey that takes them each from one world to another and into the realm of adult ways and mysteries -- but also one that has the reader in thrall to what it is to look back and remember. The Cat's Table is a luscious, bittersweet rumination on imagination, memory, and place, and what we find by reclaiming what we've lost.”
— Rick Simonson, The Elliott Bay Book Company, Seattle, WA
View the List

“In a story of intricate delicacy and beauty, Ondaatje not only tells the wondrous tale of three boys at sea -- a journey that takes them each from one world to another and into the realm of adult ways and mysteries -- but also one that has the reader in thrall to what it is to look back and remember. The Cat's Table is a luscious, bittersweet rumination on imagination, memory, and place, and what we find by reclaiming what we've lost.”
— Rick Simonson, The Elliott Bay Book Company, Seattle, WA
View the List

In the early 1950s, an eleven-year-old boy in Colombo boards a ship bound for England. At mealtimes he is seated at the “cat’s table”—as far from the Captain’s Table as can be—with a ragtag group of “insignificant” adults and two other boys, Cassius and Ramadhin. As the ship makes its way across the Indian Ocean, through the Suez Canal, into the Mediterranean, the boys tumble from one adventure to another, bursting all over the place like freed mercury. But there are other diversions as well: one man talks with them about jazz and women, another opens the door to the world of literature. The narrator’s elusive, beautiful cousin Emily becomes his confidante, allowing him to see himself “with a distant eye” for the first time, and to feel the first stirring of desire. Another Cat’s Table denizen, the shadowy Miss Lasqueti, is perhaps more than what she seems. And very late every night, the boys spy on a shackled prisoner, his crime and his fate a galvanizing mystery that will haunt them forever.

As the narrative moves between the decks and holds of the ship and the boy’s adult years, it tells a spellbinding story—by turns poignant and electrifying—about the magical, often forbidden, discoveries of childhood and a lifelong journey that begins unexpectedly with a spectacular sea voyage.


Praise For The Cat's Table…

“The Cat’s Table is just as skillfully wrought as Ondaatje’s magnum opus The English Patient, but its picaresque childhood adventure gives it a special power and intimacy . . . He is a master at creating characters, whom he chooses to present, memorably, as individuals. This choice is of a piece with the freshness and originality that are the hallmarks of The Cat’s Table.”
—Wall Street Journal

“A joy and a lark to read . . . Within a few pages of the book’s opening, The Cat’s Table has done a miraculous thing—it has ceased to be a book, or even a piece of art. It is merely a story, unfolding before the reader’s eyes, its churning motor a mystery about what it is exactly that happened on this boat . . . Told in short bursts of exposition so beautiful one actually feels the urge to slow the reading down, the novel shows us how the boy assembles the man.”
—Boston Globe

“The Cat’s Table is an exquisite example of the richness that can flourish in the gaps between fact and fiction . . . Ondaatje has an eerily precise grasp of the immediacy of a child’s world view, and an extraordinary sense of individual destiny . . . It is an adventure story, it is a meditation on power, memory, art, childhood, love and loss. It displays a technique so formidable as to seem almost playful. It is one of those rare books that one could reread an infinite number of times, and always find something new within its pages.”
—Evening Standard (UK)

“This book is wonderful, offering all the best pleasures of Ondaatje’s writing: his musical prose, up-tempo; his ear for absurd, almost surreal dialogue, which had me laughing out loud in public as I read; his admiration for craftsmanship and specialized language in the sciences and the trades; and his sumptuous evocations of sensual delight . . . In many ways, this book is Ondaatje’s most intimate yet.”
—Globe and Mail (Canada)

“A treasure chest of escapades from a pitch-perfect writer, an immaculate observer of the dance of humans, giving us an intoxicating mix of tenderly rendered boy’s eye perspective and the musings of the older narrator looking back on this intensely formative voyage . . . It is a classic, perfect premise for a novel packed with possibilities. Put it in the hands of one of the most subtle and surprising masters of world writing, Michael Ondaatje, and unalloyed joy lies latent in every sentence and sensuous quirk of the narrative. This is simply blissful storytelling . . . Think the seafaring Joseph Conrad, with an invigorating infusion of Treasure Island, a touch of Mark Twain.”
—The Scotsman (UK)

“Ondaatje’s best novel since his Booker Prize–winning The English Patient . . . [An] air of the meta adds a gorgeous, modern twist to the timeless story of boys having an awfully big adventure . . . As always, Ondaatje’s prose is lyrical, but here it is tempered; the result is clean and full of grace.”
—Publishers Weekly (starred)

“A graceful, closely observed novel that blends coming-of-age tropes with a Conradian sea voyage . . . Beautifully detailed, without a false note: It is easy to imagine, in Ondaatje’s hands, being a passenger in the golden age of transoceanic voyaging, amid a sea of cocktail glasses and overflowing ashtrays, if in this case a setting more worthy of John le Carré than Noel Coward . .  . Elegiac, mature, and nostalgic—a fine evocation of childhood, and of days irretrievably past.”
—Kirkus Reviews (starred)

“Ondaatje is justly recognized as a master of literary craft . . . The novel tells of a journey from childhood to the adult world, as well as a passage from the homeland to another country, something of a Dantean experience.”
—Annie Proulx, The Guardian (UK)

“Ondaatje’s wondrous prose feels more alive to the world than ever before . . . This is a simpler story, more simply told, than Ondaatje has accustomed his readers to . . . Yet The Cat’s Table is no less thrilling in its attempts to capture beauty in its various and terrifying forms.”
—Financial Times (UK)

“Richly enjoyable, often very funny, and gleams like a really smart liner on a sunny day . . . The magic of this fine book is in the strange inventiveness of its episodes. Ondaatje is really the master of incident in the novel, and the enchantments wash over the reader in waves . . . The beauty of Ondaatje’s writing is in its swift accuracy; it sings with the simple precision of the gaze.”
—Daily Telegraph (UK)

“The Cat’s Table is Ondaatje’s most accessible, most compelling novel to date. It may also be his finest . . . Ondaatje’s prose is, as always, stunning . . . The Cat’s Table is a breathtaking account not only of boyhood, but of its loss. It is a novel filled with utterly unique characters and situations, but universal in its themes, heartbreakingly so, and a journey the reader will never forget.”
—Vancouver Sun (Canada)

“An eloquent, elegiac tribute to the game of youth and how it shapes what follows . . . One of the strengths of the novel is the sheer brilliance of characterization on show. The bit players on board the Oronsay are almost Dickensian in their eccentricity and lovability . . . In The Cat’s Table, he has not only captured with acute precision the precarious balance of his characters’ existence on the move but also the battle that adults wage for the retention of the awe and wonder they once took for granted in their childhood. Ultimately, Ondaatje has created a beautiful and poetic study hre of what it means to have your very existence metaphorically, as well as literally, all at sea.”
—Independent on Sunday (UK)

“A novel superbly poised between the magic of innocence and the melancholy of experience.”
—Economist (UK)

“Is there a novelist who writes more compellingly about tenderness than Ondaatje? . . . The Cat’s Table is a voyage of discovery for the reader as well as for its narrator. I loved the book, was dazzled by its language, and looked forward to turning each page to learn what would happen next.”
—Montreal Gazette (Canada)

“The Cat’s Table deserves to be recognized for the beauty and poetry of its writing: pages that lull you with their carefully constructed rhythm, sailing you effortlessly from chapter to chapter and leaving you bereft when forced to disembark at the novel’s end.”
—Sunday Telegraph (UK)

“So enveloping and beautifully rendered, one is reluctant to disembark at the end of the journey . . . The best novels and poetry possess a kind of bottomlessness: each time a reader revisits a masterful work, she finds something new. Though the ocean journey in The Cat’s Table lasts a mere 21 days, it encapsulates the fullness of a lifetime. This reader will undoubtedly return to it and unearth new treasures from its depths.” ­
—Quill and Quire (Canada)