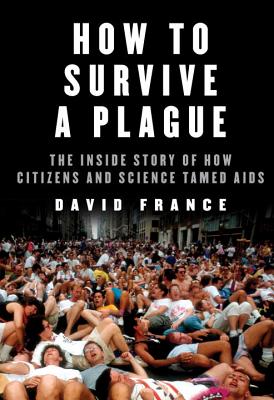 How to Survive a Plague

The Inside Story of How Citizens and Science Tamed AIDS

The definitive history of the successful battle to halt the AIDS epidemic—from the creator of, and inspired by, the seminal documentary How to Survive a Plague.

A riveting, powerful telling of the story of the grassroots movement of activists, many of them in a life-or-death struggle, who seized upon scientific research to help develop the drugs that turned HIV from a mostly fatal infection to a manageable disease. Ignored by public officials, religious leaders, and the nation at large, and confronted with shame and hatred, this small group of men and women chose to fight for their right to live by educating themselves and demanding to become full partners in the race for effective treatments. Around the globe, 16 million people are alive today thanks to their efforts.

Not since the publication of Randy Shilts’s classic And the Band Played On has a book measured the AIDS plague in such brutally human, intimate, and soaring terms.

In dramatic fashion, we witness the founding of ACT UP and TAG (Treatment Action Group), and the rise of an underground drug market in opposition to the prohibitively expensive (and sometimes toxic) AZT. We watch as these activists learn to become their own researchers, lobbyists, drug smugglers, and clinicians, establishing their own newspapers, research journals, and laboratories, and as they go on to force reform in the nation’s disease-fighting agencies.

With his unparalleled access to this community David France illuminates the lives of extraordinary characters, including the closeted Wall Street trader-turned-activist, the high school dropout who found purpose battling pharmaceutical giants in New York, the South African physician who helped establish the first officially recognized buyers’ club at the height of the epidemic, and the public relations executive fighting to save his own life for the sake of his young daughter.

Expansive yet richly detailed, this is an insider’s account of a pivotal moment in the history of American civil rights. Powerful, heart-wrenching, and finally exhilarating, How to Survive a Plague is destined to become an essential part of the literature of AIDS.

Praise For How to Survive a Plague: The Inside Story of How Citizens and Science Tamed AIDS…

“Remarkable… I doubt any book on this subject will be able to match its access to the men and women who lived and died through the trauma and the personal testimony that, at times, feels so real to someone who witnessed it that I had to put this volume down and catch my breath… This is the first and best history of [activists’] courage.” —Andrew Sullivan, The New York Times Book Review

“My favorite book of the year is easily David France’s How to Survive a Plague, a powerful history of the HIV/AIDS crisis… This book is heartbreaking, but it is also inspiring. We owe so much to those brave activists and to Mr. France for writing this vital book.” —Anderson Cooper, The Wall Street Journal

"Masterful... Despite its grim subject, this is an inspiring book... How to Survive a Plague offers a salient reminder of what can be achieved by citizens who remain unbowed and unbroken." —The Economist

“France delivers a monumental punch in the gut; his book is as moving and involving as a Russian novel, with the added gravitas of shared memory from the not-distant past. It is both an intimate, searing memoir and a vivid, detailed history of ACT UP.” —Rick Whitaker, The Washington Post

“A truly American story… [France] turns the AIDS epidemic into a thriller, one whose heroes are mostly tragic. A powerful reminder of what happens when ideology is put before humanity.” —Newsweek, Our Favorite Books of 2016

"Riveting and comprehensive... Simultaneously intimate and sweeping... How to Survive a Plague stands as a remarkably written and highly relevant record of what angry, invested citizens can come together to achieve, and a moving and instructive testament to one community's refusal—in the face of ignorance, hatred and death—to be silenced or to give up." —Chicago Tribune

“An authoritative account of a bleak time in human history, the book spans both abject horror and radiant hope—regularly moving you to tears… When science and society come together, France’s history transforms from gutting tragedy to human triumph. And with each false breakthrough, life shattered, and new day, How to Survive a Plague lives up to its name, providing a blueprint for our continued existence.” —Paste

“Extraordinary… A sweeping social history, a bracing act of in-depth journalism, and a searingly honest memoir all at once… A chronicle of the recent past that sheds light on the fights to come… The chaotic, contentious, painful form of hope offered in this book is vital even as the fight it chronicles remains unfinished.” —Slate

“David France managed to simultaneously break my heart and rekindle my anger in just the first few pages of his breathtakingly important new book… Riveting.” —Steven Petrow, The Washington Post

“Nuanced… Substantial and elegantly written, [How to Survive a Plague] is at once a deeply reported (if New York-centric) AIDS history and an intimate memoir that makes clear the author’s stake in the story.” —Boston Globe

“Remarkable… the definitive book on AIDS activism, a long-overdue update on Randy Shilts’ 1987 And the Band Played On… It’s not easy to balance solid journalism with intimate understanding of a subject, and even harder to write eloquently about a disease that’s killing your friends and loved ones. France pulls it off.” —SF Chronicle

“Flawless. Masterfully written, impeccably researched, and full of feeling for the living and dead heroes of the AIDS movement… There can be no clearer picture of the uphill battle against ignorance and bigotry… No better person to write this book, which had to be written, creating a complete and correct record of this terrible story and its heroes.” —Newsday

“France uses the techniques of the epic 19th-century novel so well that the line between fiction and nonfiction blurs… Full of vivid, intimate detail.” —The Gay & Lesbian Review

"A moving and an enraging read." —Bookforum

"Expansive, intimate, dramatic and elegantly-penned... a gripping, engrossing read — the most essential text of its kind to date." —Dallas Voice

"Painfully vivid history... Through it all, France captures the immense fortitude of those who continued to fight AIDS when it seemed unbeatable and while they were mourning the many lives lost around them." —The National Book Review

"Masterful... [France] knows how to tell a story." —EDGE Boston

"Powerful... This superbly written chronicle will stand as a towering work in its field, the best book on the pre-treatment years of the epidemic since Randy Shilts’s And The Band Played On… Most of the people to whom it bears witness are not around to read it, but millions are alive today thanks to their efforts, and this moving record will ensure their legacy does not die with them." —Sunday Times

"[A] subtle and searing history of this late-20th century plague and those who survived it… [The] great advantage France has is that… he was an eyewitness to many of the key moments during the spread of the disease and… shared in activists’ pain and suffering." —The Observer

"How an impossibly brave and unlikely coalition of gay activists, doctors, scientists and public health officials finally succeeded in putting the brakes on this global catastrophe is the subject of [this] important and powerfully written new book... How to Survive a Plague stands on its own as a… richly nuanced telling of a chain of events that forever changed medicine... Inspiring, uplifting and necessary reading." —Financial Times

"As important as Randy Shilts's And the Band Played On was in 1987, France's work is a must-read for a new generation of empowered patients, informed medical practitioners, and challenged caregivers—lest history repeat itself." —Publishers Weekly, starred review

“Prepare to have your heart buoyed and broken in this riveting account… In unflinching, brutally honest detail, France traces the lives of the people behind the constellations of aid and advocacy movements and presents their struggles in a way that will have readers stirred by each diagnosis, cheering the efforts to find a cure, and growing frustrated at the political establishments that ignored the terrible tragedy as it unfolded… This highly engaging account is a must-read for anyone interested in epidemiology, civil rights, gay rights, public health, and American history.” —Library Journal, starred review

“A lucid, urgent updating of Randy Shilts’ And the Band Played On (1987) and a fine work of social history.” —Kirkus

“Heroic and heartbreaking and magnificent history throughout, How to Survive a Plague is one of the great tales of our time: the story of incredibly brave and determined men and women who defied government, the pharmaceutical industry, vicious homophobia, and the death sentence of AIDS to overwhelm an awful scourge. These gay activists—refusing to die without a fight—were vital in staunching the epidemic. Their resistance and cunning will remain as seminal to medical history and humanity as the efforts of Pasteur and Salk.” —Carl Bernstein

“As one generation grows up with the misconception that AIDS is nothing more than a manageable illness, another grows old with the fear that the epidemic’s early days will disappear into the fog of history. How to Survive a Plague is the book for both generations. France invokes the terror and confusion of those dark times while simultaneously providing a clear-eyed timeline of the epidemic’s emergence and the disparate, often dissonant forces that emerged to fight it.” —Dale Peck

“David France is uniquely positioned to bear witness to the science and politics of the AIDS epidemic, its deeply personal impact, and the activists who refused to be silenced by it: courageous and brilliant, often selfless, willing to fight even as they struggle with death, but always fully human. From the story’s beginning, France was on the ground doing hard-hitting reporting on the plague while living its toll in the most intimate of ways. How to Survive a Plague is a definitive, long-awaited and essential account of the plague years—haunting and hopeful, devastating and uplifting. Incredibly important.” —Rebecca Skloot

“How to Survive a Plague is both a great and an important book, and we owe David France an enormous debt of gratitude for writing it. At once global and achingly intimate, his story provokes righteous rage, despair, the blackest of humor, heartbreak and, finally, blessedly, hard-won hope... for all of us. You will not soon forget these smart, courageous, dying young men. In fact, let’s call them heroes, since they were.” —Richard Russo

“How to Survive a Plague is epoch-making: the whole social and scientific history of AIDS, brilliantly told.  Informative and entertaining, suspenseful, moving, and personal.”  —Edmund White, author of Our Young Man

“This is a masterpiece of intimate storytelling with moral purpose, a contemplation not so only of an epidemic of illness but also of an epidemic of resilience. It’s a book about courage and kindness and anger and joy, written with fierce, passionate intensity and utter conviction.” —Andrew Solomon, author of Far From the Tree: Parents, Children and the Search for Identity

DAVID FRANCE is the author of Our Fathers, a book about the Catholic sexual abuse scandal, which Showtime adapted into a film. He coauthored The Confession with former New Jersey governor Jim McGreevey. He is a contributing editor for New York and has written as well for The New York Times. His documentary film How to Survive a Plague was an Oscar finalist, won a Directors Guild Award and a Peabody Award, and was nominated for two Emmys, among other accolades. His book of the same title won a Baillie Gifford Prize, a Green Carnation Prize, the Israel Fishman Nonfiction Award, a Lambda Literary award, the Randy Shilts Award, and a National Lesbian & Gay Journalist Association award for excellence in HIV/AIDS coverage. It was shortlisted for the Andrew Carnegie Medal for Excellence and the Wellcome Prize in Literature.
Loading...
or
Not Currently Available for Direct Purchase