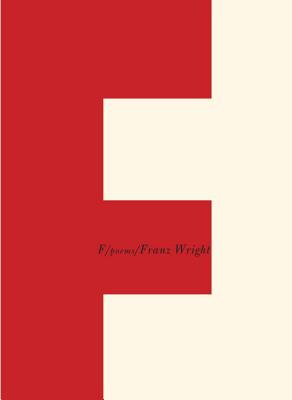 In these riveting poems, Wright declares, “I’ve said all that / I had to say. / In writing. / I signed my name. / It’s death’s move.” As he considers his mortality, the poet finds a new elation and clarity on the page, handing over for our examination the flawed yet kneeling-in-gratitude self he has become. F stands both for Franz, the poet-speaker who represents all of us on our baffling lifelong journeys, and for the alphabet, the utility and sometimes brutality of our symbols. (It may be, he jokes grimly, his “grade in life.”) From “Entries of the Cell,” the long central poem that details the loneliness of the single soul, to short narrative prose poems and traditional lyrics, Wright revels in the compensatory power of language, observing the daytime headlights following a hearse, or the wind, “blessing one by one the unlighted buds of the backbent peach tree’s unnoted return.” He is at his best in this beautiful and startling collection.

Franz Wright’s most recent works include Kindertotenwald and Wheeling Motel. His collection Walking to Martha’s Vineyard was awarded the Pulitzer Prize in 2004, and he has also been the recipient of two National Endowment for the Arts grants, a Guggenheim Fellowship, and a Whiting Fellowship, among other honors. Wright lives in Waltham, Massachusetts, with his wife, the translator and writer Elizabeth Oehlkers Wright.