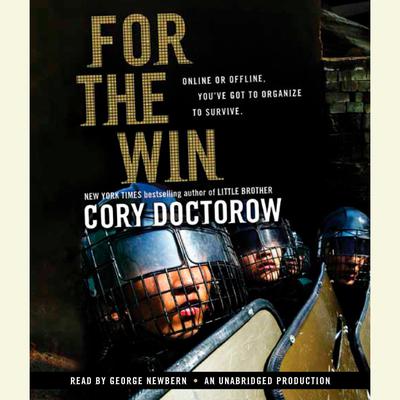 For the Win (Digital Audiobook)

At any hour of the day or night, millions of people around the globe are engrossed in multiplayer online games, questing and battling to win virtual gold, jewels, and precious artifacts. Meanwhile, millions of “gold farmers” toil in electronic sweatshops harvesting virtual treasure that their employers sell to First World gamers for real money.

Mala is a brilliant fifteen-year-old from rural India whose leadership skills in virtual combat have earned her the nickname “General Robotwalla.” In China, Matthew defies his former bosses to build his own gold-farming crew. Leonard lives in Southern California and spends his nights fighting virtual battles alongside his buddies in Asia. All of these young people, and more, become entangled with the mysterious woman called Big Sister Nor, who builds them into a movement to challenge the status quo.

Fighting pitched battles in the virtual worlds of every MMORPG worth playing, Nor’s network of gamers is so successful that it incurs ruthless opposition. Ultimately, Big Sister’s people devise a plan to crash the economy of every virtual world at once—a Ponzi scheme combined with a brilliant hack that ends up being the biggest, funnest game of all.

Canadian-born Cory Doctorow has held policy positions with Creative Commons and the Electronic Frontier Foundation and been a Fulbright Fellow at the University of Southern California. He is a co-editor of the popular weblog BoingBoing (boingboing.net), which receives over three million visitors a month. His science fiction has won numerous awards, and his YA novel Little Brother spent seven weeks on the New York Times bestseller list.