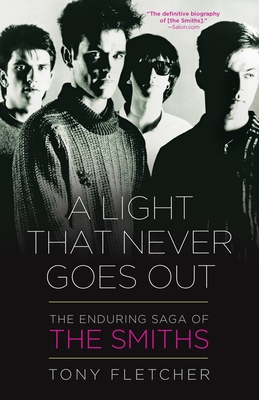 A Light That Never Goes Out

The Enduring Saga of the Smiths

The definitive book about The Smiths, one of the most beloved, respected, and storied indie rock bands in music history.

They were, their fans believe, the best band in the world. Hailing from Manchester, England, The Smiths--Morrissey, Johnny Marr, Andy Rourke, and Mike Joyce--were critical and popular favorites throughout their mid-1980s heyday and beyond. To this day, due to their unforgettable songs and lyrics, they are considered one of the greatest British rock groups of all time--up there with the Beatles, the Stones, the Who, and the Clash.

Tony Fletcher paints a vivid portrait of the fascinating personalities within the group: Morrissey, the witty, literate lead singer whose loner personality and complex lyrics made him an icon for teenagers who felt forlorn and forgotten; his songwriting partner Marr, the gregarious guitarist who became a rock god for a generation of indie kids; and the talented, good-looking rhythm section duo of bassist Rourke and drummer Joyce. Despite the band's tragic breakup at the height of their success, A Light That Never Goes Out is a celebration: the saga of four working-class kids from a northern English city who come together despite contrasting personalities, find a musical bond, inspire a fanatical following, and leave a legacy that changed the music world--and the lives of their fans.

Praise For A Light That Never Goes Out: The Enduring Saga of the Smiths…

“After reading A Light That Never Goes Out, I'm on the path to understanding Morrissey... In the end, I came away with a richer appreciation of the ethics, psychology, and artistry of [The Smiths]. Plus a burning desire to listen to the music.”
—The Austin Chronicle

“If there's a ghost fifth member of the Smiths, it might be Tony Fletcher…Fletcher reveals detail after detail.”
—The Village Voice

“Meticulously chronicles the rise of one of the '80s' best bands. This charming man Fletcher…did a fine job of recounting England's The Smiths.”
—Newsday

"There's no shortage of books on the Smiths, but this 600-page tome is the one fans want, and rightly so."
—Exclaim!

“Mr. Fletcher accomplishes the key task of a music biographer, which is a richer enjoyment of the music.”
—The Wall Street Journal

“Fletcher, who has written biographies of drummer Keith Moon and R.E.M., combines original interviews with quotes and anecdotes from the vast paper trail of the British music press to piece together this enigmatic band’s rise and fall in obsessive detail.”
—The Boston Globe

“[Fletcher] was blessed with full access to the band’s records, its business associates and, critically, its actual members. Guitarist Johnny Marr and bassist Andy Rourke granted the author extensive interviews….Fletcher’s book is exhaustive in its attention to detail.”
–The Washington Post

“Fletcher perfectly captures the wit and complexity of the band and its music…Best of all for the group’s ongoing admirers and fans, [he] displays an unflagging enthusiasm in describing every aspect of how the Smiths produced a ‘torrent of brilliant work in a blazing stream of exhaustive glory.”
—Publishers Weekly

“A full account of the singularly influential English band, drawing on extensive research and interviews...An up-to-date and revealing rock biography that sets a standard of completion that will likely prove hard to beat.”
—Kirkus

"Finally, the full story of the Smiths: four kids, a city, a sound, a dream, a scandal, a legend. Tony Fletcher reveals the emotionally intense, wildly comic, totally fascinating details of how this band changed the world. It belongs in any fan’s scholarly room."
—ROB SHEFFIELD, bestselling author of Love Is a Mix Tape

"A Light That Never Goes Out is an exhilarating read! Tony Fletcher not only examines the Smiths’ impact on the music and culture in their UK homeland, but he explores their lasting effect on America and their undeniable influence on American indie rock. I highly recommend it."
—MATT PINFIELD, host of MTV2’S 120 Minutes AND The Hivecast on iTunes

"An intriguing portrait of an intriguing band that is as rich in intellectual history as it is in rock trivia. Keith Richards, eat your heart out."
—GARY MARCUS, bestselling author of Guitar Zero: The New Musician and the Science of Learning

"Written with love and filled with gemlike moments—like Johnny Marr singing along with a 45 of the Marvelettes ‘You’re the One’ during his first meeting with Morrissey—Fletcher chronicles one of the twentieth century’s most gorgeous and subversive bands. Fans will swoon; the inexplicable rest of you will learn what the fuss was about."
—WILL HERMES, author of Love Goes to Buildings on Fire

TONY FLETCHER is the author of six books, including Moon, the bestselling biography of Keith Moon, and Remarks Remade, the definitive biography of R.E.M. He has contributed to many publications and television shows on both sides of the Atlantic, including Newsday, Spin, Mojo, Behind the Music, and more. He lives in New York’s Catskill Mountains. He can be found at www.ijamming.net.
Loading...
or support indie stores by buying on
(This book is on backorder)