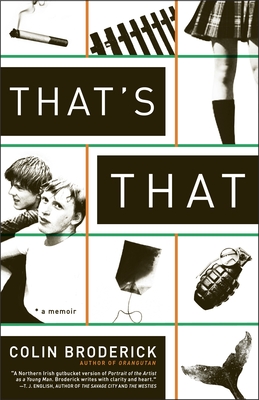 How can we know who we are if we do not understand where we came from?

Colin Broderick grew up in Northern Ireland during the period of heightened tension and violence known as the Troubles. Broderick's Catholic family lived in County Tyrone --the heart of rebel country. In That’s That, he brings us into this world and delivers a deeply personal account of what it was like to come of age in the midst of a war that dragged on for over two decades.  We watch as he and his brothers play ball with the neighbor children over a fence for years, but are never allowed to play together because it is forbidden. We see him struggle to understand why young men from his community often just disappear. And we feel his frustration when he is held at gunpoint at various military checkpoints in the North. At the center of his world—and this story—is Colin’s mother. Desperate to protect her children from harm, she has little patience for Colin’s growing need to experience and understand all that is happening around them. Spoken with stern finality, "That's that" became the refrain of Colin's childhood.

The first book to paint a detailed depiction of Northern Ireland's Troubles, That’s That is told in the wry, memorable voice of a man who's finally come to terms with his past.

Praise For That's That: A Memoir…

Praise for That's That

"Colin Broderick is in the front rank of Irish storytellers. In this memoir he walks us through Irish history and mythology, explores fallacies, tells us of savagery and humor, all in simple but colorful language. I exhort you to read That's That and obviously that is that."
—Malachy McCourt


"That’s That is Broderick’s apotheosis. It’s the hard won testament he brought back from his broken past. It turned out that it was love and not war that shaped him, but it can take half a lifetime to figure that out if the world you grew up in was daily rocked by bombs and barbarism. In That’s That Broderick does something that takes remarkable courage, he tells the truth. It’s the ultimate revolutionary act. It isn’t his parent’s truth or his community’s truth. It’s his own, and it’s unassailable."
—Cahir O'Doherty, Irish Voice

“A Northern Irish gutbucket version of Portrait of the Artist as a Young Man. Colin Broderick writes with clarity and heart about a time of moral ambiguity, when war and repression were daily facts of life.”
—T. J. English, author of The Savage City and Paddy Whacked

“Broderick renders the conflict in the North of Ireland with an intimacy and honesty at once brutal, poignant, and unforgettable. Somehow, amid a landscape of ancient hatreds and unblinking cruelties, he manages to unearth the possibilities of hope and redemption. He is writer of extraordinary talent.”
—Peter Quinn, author of Looking for Jimmy and Hour of the Cat

"What poverty is to ANGELA'S ASHES political turmoil is to THAT'S THAT, Colin Broderick's stirring coming-of-age memoir of growing up Catholic in the North during the so-called Troubles.  Written with verve and raw honesty, the book is both a captivating saga of personal discovery and the  eye-opening story of how one boy experienced this shocking chapter in Irish history."
—Billy Collins, former Poet Laureate

COLIN BRODERICK was born in Birmingham, England, but raised Irish Catholic in the heart of Northern Ireland. He has a four-year-old daughter and lives in Manhattan.