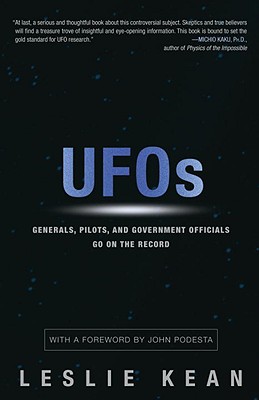 Generals, Pilots and Government Officials Go on the Record

An Air Force major is ordered to approach a brilliant UFO in his Phantom jet over Tehran. He repeatedly attempts to engage and fire on unusual objects heading right toward his aircraft, but his missile control is locked and disabled. Witnessed from the ground, this dogfight becomes the subject of a secret report by the U.S. Defense Intelligence Agency.

In Belgium, an Air Force colonel investigates a series of widespread sightings of unidentified triangular objects, and he sends F-16s to attempt a closer look. Many hundreds of eyewitnesses, including on-duty police officers, file reports, and a spectacular photograph of an unidentifiable craft is retrieved and analyzed.

Here at home, a retired chief of the FAA’s Accidents and Investigations Division reveals the agency’s response to a thirty-minute encounter between an aircraft and a gigantic UFO over Alaska, which occurred during his watch and is documented on radar.

Now all three of these distinguished men have written breathtaking, firsthand accounts about these extraordinary incidents. They are joined by Air Force generals and a host of high-level sources—including Fife Symington III, former governor of Arizona, and Nick Pope, former head of the British Defence Ministry’s UFO Investigative Unit—who have agreed to write their own detailed, personal stories about UFO encounters and investigations for the first time.

They are coming forward now because of Leslie Kean, an investigative reporter who has spent the last ten years studying the still unexplained UFO phenomenon. Kean reviewed hundreds of government documents, aviation reports, radar data, and case studies with corroborating physical evidence. She carefully examined scientifically analyzed photographs and interviewed dozens of high-level officials and aviation witnesses from around the world. With the support of former White House chief of staff John Podesta, Kean draws on her research to separate fact from fiction and to lift the veil on decades of U.S. government misinformation. Throughout, she presents irrefutable evidence that unknown flying objects—metallic, luminous, and seemingly able to maneuver in ways that defy the laws of physics—actually exist.

No one yet knows what these objects are, even though they affect aviation safety and possibly national security. The phenomenon has been officially acknowledged by numerous foreign governments. For these reasons and many others, Kean concludes that the UFO problem must be more widely recognized and ultimately solved through an unbiased scientific investigation. The material presented throughout this landmark book is sobering, unflinching, and undeniably awe-inspiring, and moves us toward a goal of properly addressing this worldwide mystery.

Praise For UFOs: Generals, Pilots and Government Officials Go on the Record…

"At last, a serious and thoughtful book about this controversial subject. Skeptics and true believers will find a treasure trove of insightful and eye opening information. This book is bound to set the gold standard for UFO research."
—Michio Kaku, Ph.D. Author of Physics of the Impossible and host of Sci Fi Science on the Science Channel

“I was astonished by the care and precision of Leslie Kean’s research in this terrific book.  Her analysis is carefully reasoned and to the point; her craftsmanship in organization and writing are superb.    Her expose' raises important questions: Why does the US government create public distrust by neglecting this important topic? Why do its agencies avoid investigating cases of interference with flight operations and instead issue absurd cover-up stories?  This book is ultimately an appeal to all scholars for an "extraordinary investigation of an extraordinary phenomenon.”
—Rudy Schild, Ph.D., Harvard-Smithsonian Center for Astrophysics

“Like me, Leslie Kean is an agnostic on the issue of UFOs.  Her book is a fine piece of journalism - not about beliefs, but about facts.  Kean presents the most accurate, most credible reports on UFO's you will ever find.  She has fought long and hard to discover the facts and let the chips fall where they may.  She may not have the final smoking gun, but I smell the gunpowder.”
—Miles O'Brien, former CNN space/science correspondent

“I find explanations offered by UFO enthusiasts and conspiracy theorists to be implausible, but I also have little patience with "deniers" who ridicule credible reports.  Leslie Kean has found a thoughtful path between extreme views, documenting the UFO mystery with intelligence and insight. She makes a strong case for U.S. participation in official, international UFO investigations and for public dissemination of the results.  The fascinating first-hand accounts make this a thought-provoking book, even for those of us who don’t know much about UFOs.”
—Neal Lane, Ph.D., Rice University; former Director of the White House Office of Science and Technology Policy

“If you don't know much about UFOs, you must read this book. If you think that UFO reports are nonsense, this book will disabuse you of that notion. Leslie Kean's UFOs informs readers at every level of knowledge and belief.  It could, and should, become the "tipping point" that leads to public acceptance of the reality of UFOs and all of its implications.”
—Don Donderi, Ph.D., Department of Psychology, McGill University (Ret.)

“In an area of study where there aren’t many, this is a serious book.  It is credible, clear, and compelling, without any farfetched jumps in logic and assumption.  Its credibility begins on the first page with John Podesta and continues with case studies of extraordinary quality to the very end.  Leslie Kean not only makes the case for, but calls for, a whole new concrete and realistic perspective on UFOs that has more honesty and integrity than any other that I have read.  This is a book for anyone with an open mind.”
—John L. Petersen, Founder & President of The Arlington Institute

“In these pages we are confronted head-on by the UFO phenomenon as revealed firsthand by highly credible government officials and military aviation experts. Their credibility and integrity cannot be questioned, and their firsthand observations cannot be ignored.  Leslie Kean provides a challenging analysis and she writes with penetrating depth and insight. The revelations in this book constitute a watershed event in lifting the taboo against rational discourse about this controversial subject.”
—Harold E. Puthoff, Ph.D., Director of The Institute for Advanced Studies at Austin

“When I started reading Leslie Kean’s UFOs, I found it very difficult to stop. This is an unprecedented assessment of what may be the greatest challenge ever presented to mankind. In an outstanding piece of investigative journalism, Kean provides a well-written and convincing appeal for change in dealing with a phenomenon that can no longer be ignored.”
—Jean-Claude Ribes, Ph.D., Paris Observatory (Ret.)

“For anyone who questions why - after more than fifty  years of denial, ridicule, and dismissal - many scientists, academics, political figures, and military personnel still insist that the subject of UFOs should be taken seriously, this book provides the answer.  Leslie Kean offers compelling documentation that physical objects, with flight characteristics not yet achievable by known technology, are being routinely reported in our skies.  They represent a mystery that needs to be solved.”
—Stuart Appelle, Ph.D., Dean of the School of Science and Mathematics, State University of New York, Brockport

"Leslie Kean’s astonishing book is the finest piece of investigative journalism ever written on this subject.  She has an incomparable ability to ‘give voice’ to a constituency of exceptionally qualified and unbiased first-hand observers. They are not from the fringe, not groupies, and not delusional.  Rather, they are high-level military, intelligence, aerospace, and government officials who speak with authority while providing reports that document actual, physical craft. Kean’s book represents the first important step toward a new U.S. government openness about UFOs.  It brings forward a reality otherwise buried for far too long inside official mystery, and elevates the discourse above that of small-minded public discussions."
—Christopher C. Green, MD, Ph.D., Harper University Hospital, Wayne State University School of Medicine

LESLIE KEAN is an investigative journalist who has been published internationally and nationally in the "Boston Globe, Baltimore Sun, Atlanta Journal-Constitution, Providence Journal, The Nation, International Herald Tribune, Globe and Mail, "and "Journal of Scientific Exploration, "among other publications. She is coauthor of "Burma's Revolution of the Spirit "and cofounder of the Coalition for Freedom of Information. She lives in New York.
Loading...
or support indie stores by buying on
(This book is on backorder)