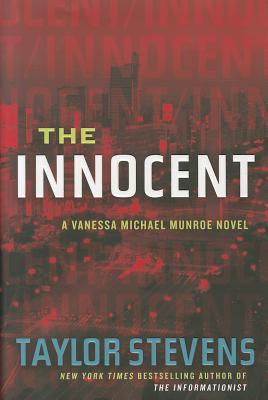 With The Innocent, Taylor Stevens, the bestselling author of The Informationist, returns with another blockbuster thriller featuring the fearless Vanessa Michael Munroe.

Eight years ago, a man walked five-year-old Hannah out the front doors of her school and spirited her over the Mexican border, taking her into the world of a cult known as The Chosen. For eight years, followers of The Prophet have hidden the child, moving her from country to country, shielding the man who stole her. Now, those who’ve searched the longest know where to find her. They are childhood survivors of The Chosen, thirty-somethings born and raised inside the cult who’ve managed to make lives for themselves on the outside. They understand the mindset, the culture within that world, and turn to Vanessa Michael Munroe for help, knowing that the only possibility of stealing Hannah back and getting her safely out of Argentina is to trust someone who doesn’t trust them, and get Munroe on the inside.

Tautly written, brilliantly paced, and with the same evocation of the exotic combined with chilling violence that made The Informationist such a success, The Innocent confirms Taylor Stevens’ reputation as a thriller writer of the first rank.

Praise For The Innocent: A Vanessa Michael Munroe Novel…

"The best thriller of the year." —San Francisco Bay Guardian

“Impressive. . . . The gripping plot runs on adrenaline as much as does Vanessa, who unleashes her violent tendencies when the powerless are threatened. . . . Vanessa makes for an intriguing heroine—at once tough, fearless, vulnerable, and compassionate.” —Publishers Weekly (starred review)

“If you haven’t joined the Munroe bandwagon, now’s the time to climb aboard.” —Dallas News

"Fans of thrillers who haven't yet discovered Stevens are in for a treat...Those who have eagerly awaited this sequel will be delighted to find the same intelligent writing, masterful pacing, and tense and fluid action scenes that feel ready-made for the cinema, and an intensely emotional core that lends Stevens' novel a depth not often found in the genre." —Associated Press

“A whirlwind thriller about a seriously a**-kicking female renegade battle against a hair-raising cult.” —Shelf Awareness

"Vanessa Michael Munroe earns her spot in the roll call next to a certain dragon-tattooed individual by virtue of calculated calm and serious self-defense skills.” —Austin Chronicle

“[A] story about a tough-as-nails spy with a tortured past who is fighting to overcome her demons and save a young girl in the process. This one kept me up all night reading…If you enjoy a fast-paced thriller, check this one out.” —Parkersburg News & Sentinel

“…as fast-paced, exciting and violent as Stevens’ first novel. If you enjoy action thrillers, you do not want to miss “The Innocent.” —Galveston Daily News

"The Innocent...is a provocative story about a women's tortured soul." —USA Today

Taylor Stevens is the "New York Times" bestselling author of "The Informationist." The first novel featuring Vanessa Michael Munroe, it received critical acclaim and has been published in seventeen other countries. Raised in communes across the globe and denied an education beyond the sixth grade, Stevens broke free of the Children of God and now lives in Texas. She is at work on a third Munroe novel.
Loading...
or
Not Currently Available for Direct Purchase