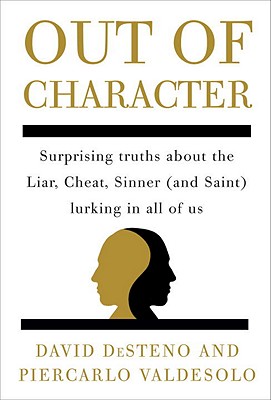 Out of Character (Hardcover)

Surprising Truths About the Liar, Cheat, Sinner (and Saint) Lurking in All of Us

Have you ever wondered why a trumpeter of family values would suddenly turn around and cheat on his wife? Why jealousy would send an otherwise level-headed person into a violent rage? What could drive a person to blow a family fortune at the blackjack tables?

Or have you ever pondered what might make Mr. Right leave his beloved at the altar, why hypocrisy seems to be rampant, or even why, every once in awhile, even you are secretly tempted, to lie, cheat, or steal (or, conversely, help someone you never even met)?

This book answers these questions and more, and in doing so, turns the prevailing wisdom about who we are upside down. Our character, argue psychologists DeSteno and Valdesolo, isn’t a stable set of traits, but rather a shifting state that is subject to the constant push and pull of hidden mechanisms in our mind.  And it's the battle between these dueling psychological forces that determine how we act at any given point in time.

Drawing on the surprising results of the clever experiments concocted in their own laboratory, DeSteno and Valdesolo shed new scientific light on so many of the puzzling behaviors that regularly grace the headlines.  For example, you’ll learn:

• Why Tiger Woods just couldn’t resist the allure of his mistresses even though he had a picture-perfect family at home. And why no one, including those who knew him best, ever saw it coming.

• Why even the shrewdest of investors can be tempted to gamble their fortunes away (and why risky financial behavior is driven by the same mechanisms that compel us to root for the underdog in sports).

• Why Eliot Spitzer, who made a career of crusading against prostitution, turned out to be one of the most famous johns of all time.

• Why Mel Gibson, a noted philanthropist and devout Catholic, has been repeatedly caught spewing racist rants, even though close friends say he doesn’t have a racist bone in his body.

• And why any of us is capable of doing the same, whether we believe it or not!

A surprising look at the hidden forces driving the saint and sinner lurking in us all, Out of Character reveals why human behavior is so much more unpredictable than we ever realized.

DAVID DESTENO is associate professor of psychology at Northeastern University, where he is also director of the Social Emotions Lab. He is editor of the American Psychological Association's journal Emotion and has served as a visiting associate professor of psychology at Harvard University. His work has been featured in the New York Times, Wall Street Journal, Washington Post, Boston Globe, ABC News, Scientific American, and NPR. He has also guest-blogged for the New York Times Freakonomics blog.

PIERCARLO VALDESOLO is an assistant professor of psychology at Claremont-McKenna College. His work has appeared both in top journals and major news outlets, including the New York Times, Washington Post, Boston Globe, LA Times, and Newsweek, and he has been awarded fellowships at Harvard University and Amherst College. He is a contributor to the Scientific American Mind Matters blog.

Praise For Out of Character: Surprising Truths About the Liar, Cheat, Sinner (and Saint) Lurking in All of Us…

"A fascinating yet highly readable perspective on the psychology of the hero/villain spectrum of human character, inviting us to reconceive personality, both our own and that of others." – The Atlantic


“My bad -- and your bad too. This smart and lively book uses cutting-edge research in psychological science to reveal the hero and the villain that live inside each of us.”
-Daniel Gilbert, Professor of Psychology, Harvard University and bestselling
author of STUMBLING ON HAPPINESS


“Who would have ever thought that a pair of social psychologists would have so much to say about good and evil? David DeSteno and Piercarlo Valdesolo are brilliant experimentalists and deep thinkers, and Out of Character hits the sweet spot --it's scientifically rigorous, smoothly written, and achingly relevant to everyday life. It shows how laboratory research is undermining the very notion of a fixed moral character, and explores a new approach to hypocrisy, pride, prejudice, jealousy, and love.”
-Paul Bloom, Professor of Psychology, Yale University, author of HOW PLEASURE WORKS


“It is not unusual to think of someone as either a moral or immoral person, of good character or not.  David DeSteno and Piercarlo Valdesolo make the intriguing argument instead that the world is not filled with saints and sinners, but rather there is good and bad in all of us.  Marshalling data from some of the most clever and counterintuitive experiments in social psychology and interpreting these findings in new ways, DeSteno and Valdesolo surprise us on nearly every page.  Out of Character should be read by anyone interested in human behavior; it challenges simple but engrained ideas about virtue and evil in a lively, entertaining, and insightful way.”
-Peter Salovey, Provost, Yale University and co-creator of the theory of Emotional Intelligence