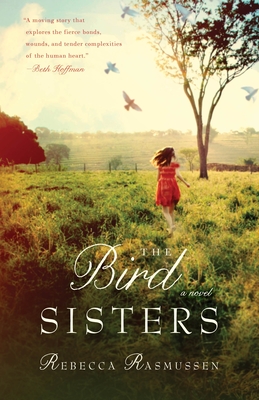 In Spring Green, Wisconsin, spinster sisters Milly and Twiss have spent their lives listening to heartbeats and heartaches, nursing birds and the people who bring them back to health.

Back in the summer of 1947, Milly and Twiss knew nothing about trying to mend what had been accidentally broken. Milly was known as a great beauty with emerald eyes and Twiss was a brazen wild child who never wore a dress or did what she was told. That was the summer their golf pro father had an accident that cost him both his swing and his charm, and their mother, the daughter of a wealthy jeweler, finally admitted that their hardscrabble lives wouldn't change. It was the summer their priest, Father Rice, announced that God didn't exist and ran off to Mexico, and a boy named Asa finally caught Milly's eye. Most unforgettably, it was also the summer their cousin Bett came down from a town called Deadwater and changed the course of their lives forever.

Rebecca Rasmussen's masterful debut novel is full of hope and beauty, heartbreak and sacrifice, love and the power of sisterhood, offering wonderful surprises at every turn.

Praise For The Bird Sisters: A Novel…

"THE BIRD SISTERS is truly something to crow about. Rasmussen’s obvious intimacy with her characters...breathes such life into them, each voice is perfectly defined, whether her characters speak as teenager or septuagenarians."--St. Louis magazine

"THE BIRD SISTERS is in no way imitative, it has the sturdy literary bones of pastoral masterworks such as Jane Smiley's A Thousand Acres and Marilynne Robinson's Housekeeping." - St. Louis-Post Dispatch

"A magical debut, original and poignant, lovely and moving. THE BIRD SISTERS evokes the richly imaginative joys of childhood and the throat-aching betrayals and loyalties of being an adult. I absolutely loved THE BIRD SISTERS and will carry Milly and Twiss with me as if in a locket for a long, long time." -- Jenna Blum, bestselling author of Those Who Save Us

“What a book -- unique, beautifully written, vivid and heartbreaking. I loved it. With evocative and finely wrought prose, Rebecca Rasmussen has crafted a moving story that explores the fierce bonds, wounds, and tender complexities of the human heart. THE BIRD SISTERS is a magical debut.”—Beth Hoffman, bestselling author of Saving CeeCee Honeycutt

"THE BIRD SISTERS is that immensely satisfying combination of indelible characters and a suspenseful and cunningly revealed plot. In lovely evocative prose Rebecca Rasmussen conjures up her two sisters, Milly and Twiss, and their rural Wisconsin community during the summer that changed their lives. Full of wonderful surprises, this is a splendid debut that will stay with the reader long after the last page."–Margot Livesey

"Rebecca Rasmussen has written her graceful debut, THE BIRD SISTERS, with unflinching and transporting empathy. After a few short chapters of this vivid, lucid novel, you will forget you are reading words on a page; the book in your hands will become a portable window into the interior lives of two remarkable sisters."–Stefan Merrill Block, author of The Story of Forgetting

"In shining prose, Rebecca Rasmussen brings to life the world of Milly and Twiss —characters written with such grace and tenderness that I fell in love with them at once. THE BIRD SISTERS is a lush and moving story about discovery and disappointment, failing and forgiveness, and the enduring bond of family. It’s a beautiful novel."–Aryn Kyle, author of The God of Animals

“In THE BIRD SISTERS, Rebecca Rasmussen has created the ultimate literary heroines with Milly and Twiss. Heartbreakingly brave as they are fragile, the sisters endure despite the failings of love both familial and romantic, of promises not kept, of dreams deferred and the price one pays for keeping secrets. In prose that sings, Rasmussen has created a magical world where you will believe that birds – and perhaps even humans — no matter how broken — will soar under the capable ministrations of Milly and Twiss.”—Robin Antalek, author of The Summer We Fell Apart

"THE BIRD SISTERS tells its tale with prose as miraculous as the images it conveys, like a starling, on the verge of death, suddenly twitching and taking flight. The achingly human characters, so stubborn they keep unspoken all the words that could save them, are tied together by last chances and lost love. And yet Rebecca Rasmussen’s gorgeous debut is infused with a certain grace: there remains hope that damaged things, wild or tame, can still be nursed back together again." --Siobhan Fallon, author of You Know When the Men Are Gone

"Rasmussen's debut novel begins like a typical coming-of-age story, but reveals itself to be a singular portrayal of familial sacrifice and loss…Achingly authentic and almost completely character driven, the story of the sisters depicts the endlessly binding ties of family."–Publisher’s Weekly

REBECCA RASMUSSEN is the author of the novels Evergreen and The Bird Sisters. Her stories have appeared in or won prizes from TriQuarterly, Narrative Magazine, Glimmer Train, The Mid-American Review, among other journals. She was born and raised in the Midwest. Currently, she lives in Los Angeles with her husband and daughter and teaches writing at UCLA. Visit her at RebeccaRasmussen.com.

The Bird Sisters is set in Spring Green, Wisconsin, a small farming community by the Wisconsin River. Spring Green seems to be distinct in nearly every way from Deadwater, Minnesota, which is where Cousin Bett has grown up. How does each location shape the story, each community, and our characters? Can you imagine Milly and Twiss in Deadwater? How do the places we live shape us?

The novel is primarily set during the late 1940s, when the pace of life was a little bit slower than it is today. There seems to be a pervasive cultural nostalgia and a renaissance with regard to skills and cultural mores from the recent past (for example, folks learning how to can vegetables, a love of vintage clothing, etc.). Why do you think this is?

Memories play such a powerful role in Milly and Twiss’s lives because, in many ways, their lives were arrested while both were teenagers. Can they ever be at peace? Is there always time for a fresh start?

Milly and Twiss will do anything and everything for each other in the novel, but they won’t talk openly about all that has happened to them over the course of their lives—especially events in their youth. Why is it so diffi cult for them? After so many years together, do you think that each knows of the other’s disappointments, vulnerabilities, and heartbreaks without having to explicitly say it? Or do you think that even after all this time the two do not know each other as well as they think?

Money is a constant source of tension for Milly and Twiss’s parents in the novel, but in the beginning of their relationship, their mother thought that her dreams would come true without her family’s money, and their father thought that his dreams would come true through his proximity to money at the country club. How were they right and how were they wrong? Money, and lack of it, is also a source of confl ict between other characters (for example, Father Rice steals the entire meager collection from the church and Mr. Peterson pays for Bett’s medical care). How does money solve problems in the novel as well as create them?

Cousin Bettie—Bett—comes down from Deadwater, Minnesota, to stay with Milly and Twiss for the summer and in doing so changes the dynamics of their family. Bett grows close to each of the sisters in very different ways. How would the family have changed if not for Bett? In other words, do you think that the changes were the result of Bett’s particular personality? Or do you think that she was just in the right place at the right time to be seen as a catalyst?

Both Milly and Twiss sacrifi ce their personal dreams for, they think, the betterment of the other. When is personal sacrifice for the sake of the larger goal noble and valiant? At what point is it foolish? Do you think that they make the right choices? How do you think Bett feels about her choices? What do you think she was trying to tell Milly by sending her the book?

Asa, Mr. Peterson, and Joe all seem to make significant life choices based on snap judgments. How has this impulsive streak served them well? How has it hurt them? If Asa truly loved Milly as he seemed to, how could he so quickly abandon her? Do you think he understood at the time what Milly was asking of him? And by asking it, do you think she was asking too much of someone she loved?

Throughout the novel, Twiss and Father Rice exchange letters. In these letters, Twiss often reveals her secret feelings. Father Rice, in turn, reveals his. In the age of the Internet, have we lost the intimacy that can be found in this old-fashioned form of correspondence, the traditional letter? How do we choose to share what we do when it’s by letter, e-mail, text, Twitter, Facebook update, blog post, or telephone? When was the last time you handwrote a letter?