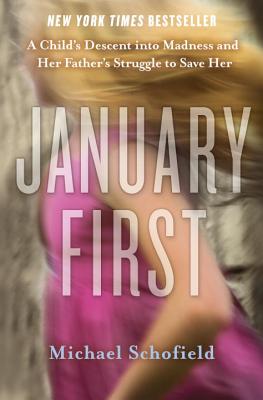 Michael Schofield’s daughter January is at the mercy of her imaginary friends, except they aren’t the imaginary friends that most young children have; they are hallucinations. And January is caught in the conflict between our world and their world, a place she calls Calalini.  Some of these hallucinations, like “24 Hours,” are friendly and some, like “400 the Cat” and “Wednesday the Rat,” bite and scratch her until she does what they want.  They often tell her to scream at strangers, jump out of buildings, and attack her baby brother.

At six years old, January Schofield, “Janni,” to her family, was diagnosed with schizophrenia, one of the worst mental illnesses known to man.  What’s more, schizophrenia is 20 to 30 times more severe in children than in adults and in January’s case, doctors say, she is hallucinating 95 percent of the time that she is awake. Potent psychiatric drugs that would level most adults barely faze her.

A New York Times bestseller, January First captures Michael and his family's remarkable story in a narrative that forges new territory within books about mental illness. In the beginning, readers see Janni’s incredible early potential: her brilliance, and savant-like ability to learn extremely abstract concepts. Next, they witnesses early warning signs that something is not right, Michael’s attempts to rationalize what’s happening, and his descent alongside his daughter into the abyss of schizophrenia.  Their battle has included a two-year search for answers, countless medications and hospitalizations, allegations of abuse, despair that almost broke their family apart and, finally, victories against the illness and a new faith that they can create a life for Janni filled with moments of happiness.

A compelling, unsparing and passionate account, January First vividly details Schofield’s commitment to bring his daughter back from the edge of insanity.  It is a father’s soul-baring memoir of the daily struggles and challenges he and his wife face as they do everything they can to help Janni while trying to keep their family together.

Praise For January First: A Child's Descent Into Madness and Her Father's Struggle to Save Her…

“Imagine invisible demons that attack your beautiful child. But this is no nightmare, and no supernatural fantasy. The demons are real, and they come from inside her own mind. The story of January Schofield, diagnosed at six with childhood schizophrenia. is told by her father, Michael, with a father's tenderness, a novelist's consciousness, and a knight's grace. We can hold our breath and pray, but not look away. This modern parable may be the most compelling book you will ever read.” --Jacquelyn Mitchard, author of The Deep End of the Ocean

“January First is a riveting and compelling-and also quite painful--story of a father’s efforts to help his young daughter find a place for herself in this world in the face of a serious mental illness. Schofield gives a glimpse inside the mind of a child who lives much of her life in another world, interacting with "friends" who are only in her mind. Schofield takes us on his journey with Jani, starting with his thoughts that Jani is simply a misunderstood genius to recognition that something is really wrong, to the ultimate diagnosis of schizophrenia, a very serious mental illness, even more so when it manifests in a child.  Schofield and his wife never give up.  Their dedication and steadfastness are inspirational.  Their story will be highly valued by the many families with a child with mental illness-indeed, by the many families who have any kind of struggle with their kids.  The book ends on a hopeful note with Jani in a better place, yet we recognize that the battle is likely not over.” – Elyn Saks, MacArthur Grant Recipient and author of The Center Cannot Hold

"In his memoirs 'January First,' Michael Schofield chronicles his family's experience with [a] devastating mental illness, which usually presents itself at least a decade later." --Daily Mail (UK)


"An unflinching portrait of the scourge of mental illness." --Kirkus Reviews

"In this dramatic memoir, Schofield...explains the mental illness of his young daughter...offers valuable insight for others in similar situations, and ends on a hopeful note." --Publishers Weekly

MICHAEL SCHOFIELD teaches writing courses at California State University, Northridge. He keeps a blog of his family's journey through Janni's schizophrenia at www.janisjourney.org."
or
Not Currently Available for Direct Purchase