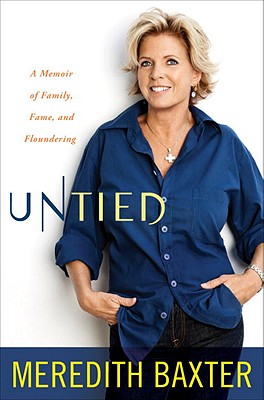 A Memoir of Family, Fame, and Floundering

“I remember Sarah asking me, when I’d just begun therapy with her, what I looked for in a man.  After a few moments of silent, tense deliberation I had it.  ‘Hair,’ I blurted. ‘He has to have hair.’”

Meredith Baxter is a beloved and iconic television actress, most well-known for her enormously popular role as hippie mom, Elyse Keaton, on Family Ties. Her warmth, humor, and brilliant smile made her one of the most popular women on television, with millions of viewers following her on the small screen each week. Yet her success masked a tumultuous personal story and a harrowing private life. For the first time, Baxter is ready to share her incredible highs, (working with Robert Redford, Doris Day, Lana Turner, and the cast of Family Ties), and lows (a thorny relationship with her mother, a difficult marriage to David Birney, a bout with breast cancer), finally revealing the woman behind the image.

From her childhood in Hollywood, growing up the daughter of actress and co-creator of One Day at a Time Whitney Blake, Baxter became familiar with the ups and downs of show business from an early age. After wholeheartedly embracing the 60s counterculture lifestyle, she was forced to rely on her acting skills after her first divorce left her a 22-year-old single mother of two. Baxter began her professional career with supporting roles in the critically panned horror film Ben, and in the political thriller All the President's Men.

More lucrative work soon followed on the small screen. Baxter starred with actor David Birney as the title characters in controversial sitcom Bridget Loves Bernie. While the series only lasted a year, her high-profile romance with Birney lasted 15 volatile and unhappy years. Hiding the worst of her situation from even those closest to her, Baxter’s career flourished as her self-esteem and family crumbled. Her successful run as Nancy on Family was followed by her enormously popular role on Family Ties, and dozens of well-received television movies.

After a bitter divorce and custody battle with Birney, Baxter increasingly relied on alcohol as a refuge, and here speaks candidly of her decision to take her last drink in 1990.

And while another ruinous divorce to screenwriter Michael Blodgett taxed Baxter’s strength and confidence, she has emerged from her experiences with the renewed self-assurance, poise, and understanding that have enabled her to find a loving, respectful relationship with Nancy Locke, and to speak about it openly.

Told with insight, wit, and disarming frankness, Untied is the eye-opening and inspiring life of an actress, a woman, and a mother who has come into her own.

Meredith Baxter has been an actor for 40 years and has five children. She achieved early success in the comedy "Bridget Loves Bernie"; the acclaimed ABC drama "Family" and the popular NBC sitcom "Family Ties." Baxter makes appearances speaking on breast cancer, domestic violence, alcoholism and general life experiences. She lives in Santa Monica, California with her partner, Nancy Locke.
Loading...
or
Not Currently Available for Direct Purchase