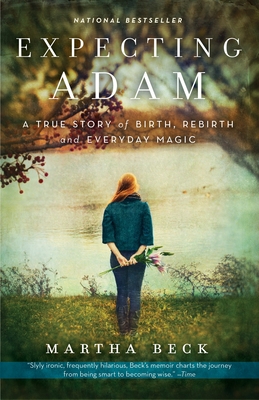 A True Story of Birth, Rebirth, and Everyday Magic

Includes an all-new afterword about Adam.

John and Martha Beck had two Harvard degrees apiece when they conceived their second child. Further graduate studies, budding careers, and a growing family meant major stress--not that they'd have admitted it to anyone (or themselves). As the pregnancy progressed, Martha battled constant nausea and dehydration. And when she learned her unborn son had Down syndrome, she battled nearly everyone over her decision to continue the pregnancy. She still cannot explain many of the things that happened to her while she was expecting Adam, but by the time he was born, Martha, as she puts it, "had to unlearn virtually everything Harvard taught [her] about what is precious and what is garbage."


Praise For Expecting Adam: A True Story of Birth, Rebirth, and Everyday Magic…

“Immensely appealing…hooked me on the first page and propelled me right through visions and out-of-body experiences I would normally scoff at.”--Detroit Free Press

“I challenge any reader not to be moved by it.”--New York Newsday


"Expecting Adam is Martha Beck's meticulously written, uplifting, and compassionate account of being gifted with a retarded son who opens her heart to the deep intuitions that love can bring."   --Judith Orloff, M.D., author of Second Sight

"Set half in Harvard and half in heaven, Expecting Adam is a tough-minded yet tender-hearted book of spiritual discovery--a rueful, riveting, piercingly funny, thoroughly modern and deeply old-fashioned memoir. In short, a book to be reckoned with."      --Julia Cameron, author of The Artist's Way

"I can't believe I almost didn't read this book. The thing is, I thought it was about a lady who had a baby with Down Syndrome. This is like saying ANNA KARENINA is a book about a lady who commits suicide. In fact, this book is about matters so important and yet so totally way-out that I would accept no one but a comic genius with seven years at Harvard under her belt telling me about them. That's Martha Beck: funny, companionable, razor-sharp, down-to-earth, and onto the Big Secrets of Life Itself. Anyone considering having a child should have to read this book. It has changed some of my thinking about pregnancy and about children with disabilities, and I don't think it's too much to say it could change my life."
--Marion Winik, author of First Comes Love and The Lunchbox Chronicles

"Expecting Adam  is not one of those grit-your-teeth, lemons-into-lemonade sagas that leave the reader feeling more besieged and guilty than the writer. It is a long hymn, from a practical woman caught flatfooted by amazing grace. Martha Beck is a celebrant skeptics can trust."
--Jacquelyn Mitchard, author of The Most Wanted  and The Deep End of the Ocean

"I laughed. I cried. I couldn't put it down. I didn't want it to end. I wish I knew Adam and his family--and of course I do. A brave, uplifting, life-transforming book."     --Sophy Burnham, author of A Book of Angels

"With uncommon sense and dependable wit, Martha Beck unravels every assumption about the meaning of life, choice, love--and the wisdom of pursuing happiness through any of the usual routes. If Expecting Adam raises suspicions among more rational readers that Martha Beck is slightly crazy, it raised my hopes that I'd catch it from her."     --Mary Kay Blakely, author of American Mom

MARTHA BECK is a writer, life coach, and columnist for O, the Oprah Magazine. She has a B.A., an M.A., and a Ph.D. in sociology from Harvard. Beck's other books include the New York Times bestseller Finding Your Own North Star, Leaving the Saints, The Four Day Win, The Joy Diet, and Steering by Starlight. Dr. Beck lives in Phoenix, Arizona, with her family.

1. At the beginning of Expecting Adam(p. 7), the author reveals that she wrote the book twice previously as a novel. Why do you think she began her work as fiction? Does this seem unusual or surprising? How did the switch to the nonfiction genre of memoir change her and her story? What were the risks involved?

2. How does the author employ aspects of Asian culture to enrich her story? Why do you think she looks beyond traditional Western experience to explain that of her own family? What is the significance of the Bunraku puppeteers in her story (see pp. 12, 16-17, 23, 26, and 41 for example), and why does this metaphor work so well to explain her extraordinary experiences?

3. The author writes that, through Adam, she and her husband John become ‘infants in a world where magic is commonplace, Harvard professors are the slow learners, and retarded babies are the master teachers? (p. 7). Does she feel relief, terror, or both in the process of having her world turned upside down? Why? Why does our system of education seem to reward the closing of minds rather than their opening? Why do you think Martha and John find the culture of Harvard, arguably the apogee of the learned world, to be such a frightening and lonely place? Do you think they are the only ones who feel like impostors there? What does it say about this institution that Martha and John feel they have to tell lies, conceal themselves, and endure terrible loneliness in order to succeed there?

4. The author’s life is now, she writes, full of magic and miracles. Why were Martha and John unable to experience the truly miraculous within the religions they practiced before Adam was born? How did the differences in their religious beliefs affect their personalities and their early marriage (pp. 169-170)? How does Adam lead them from their isolated positions, through the ‘demilitarized zone’ between them, to a genuine spiritual communion?

5. What does the author mean when she writes that ‘mother’ is a verb (p. 59)? Why does Martha have to allow herself to be mothered by Sibyl and Deirdre before she can understand the meaning of the noun? Why is it so difficult for Martha to accept their kindness at first?

6. What does the anecdote about Adam’s handing the rose in the bud vase to his mother reveal about his essential nature (pp. 69-70)? How is the dream Martha has in University Health Services nearly four years earlier (pp. 64-66) connected to Adam’s rose? What does Martha mean when she writes that Adam ‘loved me despite my many disabilities’ (p. 70)? Why do you think she chose to write about this experience near the beginning of the book, rather than placing it chronologically within the story?

7. Why do you think the author emphasizes that she does not intend to judge other parents for any of the decisions they make about the conception and birth of their children? How would a strongly ‘pro-life’ stance in the book have altered her work? How do her experiences and her ‘new way of seeing’ (p. 72) create such an open heart when considering the choices other people make?

8. How do Dr. Grendel’s attitudes (pp. 215-220) reflect those of the scientific community in general? How can ignorance paradoxically coexist with extensive knowledge, even in our country’s most prestigious medical practices? What, in your opinion, should love have to do with medicine? Do you think scientific researchers are on the right track concerning their efforts to eradicate chromosomal irregularities and genetic disease?

9. The author includes a quotation (p. 268) from Rumi, the Persian mystic, in her book: God’s joy moves from unmarked box to unmarked box,

From cell to cell. As rainwater, down into flowerbed.

As roses, up from the ground.

Now it looks like a plate of rice and fish,

Now a cliff covered with vines,

Now a horse being saddled.

It hides within these,

Till one day it cracks them open.

What does this passage mean to the author? To you? In your opinion, are there angels at work in the world? Have you had experiences that, like those of Martha Beck, point to an extraordinary presence of goodness and grace among us? How do you explain them?

10. The author writes that, immediately after giving birth to Adam, ‘I no longer felt like the focus of all that magic. I felt . . . normal. I felt exactly the way I wanted my son to be. It was a tremendous let-down’ (p. 304). Are her emotions at this time what you would have expected? Why, or why not? How do these moments change forever the way the author values what is ‘normal’? Has the story changed your feelings, as well?

11. The descriptions of Martha’s and John’s families, and anecdotes involving family members, are some of the funniest and most heartbreaking parts of the book. How does Adam’s life gradually transform the worldviews of his grandparents, aunts, and uncles? How do their initial attitudes reflect those of society in general? Do you believe a similar transformation in attitudes toward those with chromosomal irregularities is possible in the culture at large?