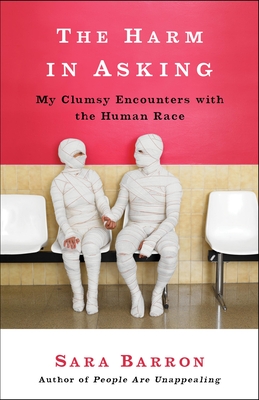 The Harm in Asking (Paperback)

My Clumsy Encounters with the Human Race

Welcome to the perverse and hilarious mind of Sara Barron. In The Harm in Asking, she boldly addresses the bizarre indignities of everyday life: from invisible pets to mobster roommates, from a hatred of mayonnaise to an unrequited love of k.d. lang, from the ruinous side effect of broccoli to the sheer delight of a male catalogue model. In a voice that is incisive and entirely her own, Barron proves herself the master of the awkward, and she achieves something wonderful and rare: a book that makes you laugh out loud. Simply put: if you read it, you will never be the same.*

*That's not true. You'll probably stay the same. But you'll have laughed a lot. And you'll have learned a fun fact about Jessica Simpson's home spray. See? You didn't even know she had a home spray! The learning has already begun.

SARA BARRON’S work has appeared in Vanity Fair; on Showtime's This American Life, NPR's Weekend Edition, and Today; and at HBO's Comedy Festival. She is a frequent host of The Moth: True Stories Told Live events.


Praise For The Harm in Asking: My Clumsy Encounters with the Human Race…

Praise for The Harm In Asking

“Whether [Barron is] moving into a friend's walk-in closet because she's priced out of Manhattan real estate, discussing her love of bad music, or going on a hot date at Chipotle, we're lucky to squirm alongside her. . . . Barron makes for great company. The show-stopping penultimate essay alone . . . is worth the price of admission.”--Entertainment Weekly

“If you’re searching for something both well-written and hilarious . . . then this Bud’s for you.”—BUST Magazine

"Sara Barron has a knack for colliding into life's odd characters and sharp corners with hilarious and heartrending results. Here she navigates this journey with the biting humor and telling observation of a born storyteller." –Piper Kerman, author of Orange Is the New Black: My Year in a Woman's Prison

“Made me laugh so hard, my ribs and sides ached. . . . If Sex in the City had been based on reality, it would have been more like . . . Barron’s book. . . . If you like funny, brutally honest, self-deprecating writers who write about life’s everyday degradations (Barron has been compared to David Sedaris), then you may want to pick up a copy of The Harm in Asking.”--PopMatters.com

"Pick up The Harm In Asking as soon as you can so you can feel like you’re talking to your favorite friend, the one who is not afraid to say salty things and expose her secrets for the joy of watching you respond with a hearty laugh."--HelloGiggles.com

"There are plenty of laugh-out-loud moments thoughout. . . . Fans of the Chelsea Handler/Tina Fey awkward-and-unashamed sense of humor will find a kindred spirit."--Publishers Weekly

“Sara Barron is the reigning queen of New York’s live storytelling scene. In The Harm in Asking she proves she's even better written down." –Jon Ronson, author of The Psychopath Test

Praise for People Are Unappealing

“Sara Barron’s essays . . . are, dare we say it, as funny as David Sedaris . . . When you aren't squirming, you're laughing out loud." –Los Angeles Times

"A wickedly funny and dirty treasure trove of modern day oddballs." –Sloane Crosley, author of I Was Told There'd Be Cake