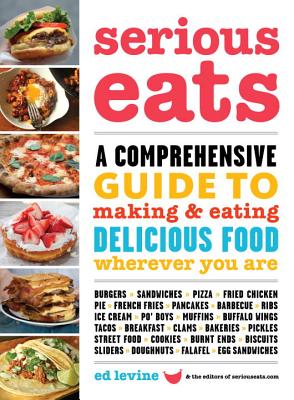 Ed Levine and the editors of food blog SeriousEats.com bring you the first Serious Eats book, a celebration of America's favorite foods, from pizza to barbecue, tacos to sliders, doughnuts to egg sandwiches, and much more. Serious Eats crackles with the energy and conviction that has made the website the passionate, discerning authority on all things delicious since its inception in 2006.
Are you a Serious Eater?
1. Do you plan your day around what you might eat?
2. When you are heading somewhere, anywhere, will you go out of your way to eat something delicious?
3. When you daydream, do you often find yourself thinking about food?
4. Do you live to eat, rather than eat to live?
5. Have you strained relationships with friends or family by dictating the food itinerary--changing everyone's plans to try a potentially special burger or piece of pie?
Ed Levine, whom Ruth Reichl calls the "missionary of the delicious," and his SeriousEats.com editors present their unique take on iconic foods made and served around the country. From house-cured, hand-cut corned beef sandwiches at Jake's in Milwaukee to fried-to-order doughnuts at Shipley's Do-Nuts in Houston; from fresh clam pizza at Zuppardi's Pizzeria in West Haven, Connecticut, to Green Eggs and Ham at Huckleberry Bakery and Cafe in Los Angeles, Serious Eats is a veritable map of some of the best food they have eaten nationwide.
Covering fast food, family-run restaurants, food trucks, and four-star dining establishments, all with zero snobbery, there is plenty here for every food lover, from coast to coast and everywhere in between. Featuring 400 of the Serious Eats team's greatest food finds and 50 all-new recipes, this is your must-read manual for the pursuit of a tasty life.
You'll learn not only where to go for the best grub, but also how to make the food you crave right in your own kitchen, with original recipes including Neapolitan Pizza (and dough), the Ultimate Sliders (which were invented in Kansas), Caramel Sticky Buns, Southern Fried Chicken, the classic Reuben, and Triple-Chocolate Adult Brownies. You'll also hone your Serious Eater skills with tips that include signs of deliciousness, regional style guides (think pizza or barbecue), and Ed's hypotheses--ranging from the Cuban sandwich theory to the Pizza Cognition Theory--on what makes a perfect bite.

ED LEVINE, founder of SeriousEats.com, is a New York-based food writer, blogger, and frequent New York Times contributor. He is a recurring judge on Food Network's Iron Chef America and has appeared on Good Morning America, Fresh Air, Charlie Rose, Martha Stewart Radio, The Splendid Table, Leonard Lopate, and CBS's Sunday Morning. Serious Eats has won two James Beard Awards and was named by Time as one of the Top 50 Websites in 2008 and 2010.
or
Not Currently Available for Direct Purchase
Copyright © 2020 American Booksellers Association