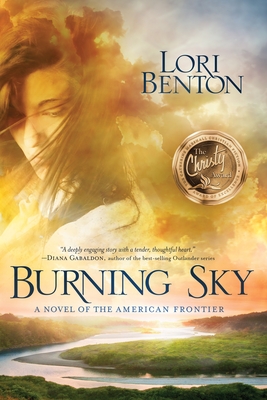 A Novel of the American Frontier

A Christy award-winning novel about a woman caught between two worlds, and the lengths she goes to find where she belongs

Abducted by Mohawk Indians at fourteen and renamed Burning Sky, Willa Obenchain is driven to return to her family’s New York frontier homestead after many years building a life with the People. At the boundary of her father’s property, Willa discovers a wounded Scotsman lying in her path. Feeling obliged to nurse his injuries, the two quickly find much has changed during her twelve-year absence: her childhood home is in disrepair, her missing parents are rumored to be Tories, and the young Richard Waring she once admired is now grown into a man twisted by the horrors of war and claiming ownership of the Obenchain land.

When her Mohawk brother arrives and questions her place in the white world, the cultural divide blurs Willa’s vision. Can she follow Tames-His-Horse back to the People now that she is no longer Burning Sky? And what about Neil MacGregor, the kind and loyal botanist who does not fit into in her plan for a solitary life, yet is now helping her revive her farm? In the aftermath of the Revolutionary War, strong feelings against “savages” abound in the nearby village of Shiloh, leaving Willa’s safety unsure.

As tensions rise, challenging her shielded heart, the woman called Burning Sky must find a new courage--the courage to again risk embracing the blessings the Almighty wants to bestow. Is she brave enough to love again?

Lori Benton was raised east of the Appalachian Mountains, surrounded by early American history going back three hundred years. Her novels transport readers to the eighteenth century, where she brings to life the Colonial and early Federal periods of American history. When she isn’t writing, reading, or researching, Lori enjoys exploring and photographing the Oregon wilderness with her husband. She is the author of Burning Sky, recipient of three Christy Awards, The Pursuit of Tamsen Littlejohn, Christy-nominee The Wood’s Edge, and A Flight of Arrows.

Praise For Burning Sky: A Novel of the American Frontier…

“Lori Benton gives us seasons in her debut novel Burning Sky. Seasons of planting corn, beans, and pumpkins as backdrops to the ripening and challenges of lives working through chaos after a war and a terrible personal tragedy. The author gives us seasons of the journey through loss, risk, family, and love. The author’s voice is mesmerizing with evocative phrases like ‘The air inside the cabin swirled with stale memories, echoes of once-familiar voices trapped within, awaiting her coming to free them.’ Set on a frontier homestead in New York in 1784, we meet distinctive characters I came quickly to care about. And the promises of the opening poetic question of Burning Sky / Willa, ‘Will the land remember?’ is answered with passion and grace and the satisfaction of a good harvest. Enjoy this wonderful novel.”
—Jane Kirkpatrick, award-winning author of One Glorious Ambition

“In Burning Sky, Lori Benton brings to turbulent life the bitter aftermath of the Revolution, when those who fought on opposing sides returned to ravaged homes, soul scarred by horrifying acts they both suffered and committed. With lyrical imagery and finely drawn characters who rise from the page, Burning Sky vividly portrays how God restores the bruised reed and the dimly burning wick and brings new life from the ashes of the past.”
—J. M. Hochstetler, author of the American Patriot series

“Burning Sky is a beautifully written story of courage, love, and new beginnings. Author Lori Benton introduces us to a great cast of characters while keeping the action strong in every vividly drawn scene. Burning Sky had me reading deep into the night to see if Willa would find a way to leave her unhappy past behind and open her heart to love again. Highly recommended to fiction lovers everywhere.”
—Ann H. Gabhart, author of Angel Sister, The Outsider, and other stories

“An authentic rendering of frontier life, full of heart and hope. Burning Sky takes the reader on a vivid journey into New York’s wilderness at a time when cultures collided and lives were forever changed. A memorable debut!”
—Laura Frantz, author of The Colonel’s Lady and Love’s Reckoning

“Easily the best debut novel I’ve ever read. Burning Sky is a powerful account of a white woman born Wilhelmina Obenchain who lived as Burning Sky, a daughter of a Mohawk clan. Lori Benton writes with a colorful, spirited pen. Her distinct and compelling voice seizes the reader and holds them captive until the last line of this remarkable book.”
—Bonnie Leon, author of the Sydney Cove series and Alaskan Skies series

“By turns exciting and heart-wrenching, Burning Sky is a deeply engaging story with a tender, thoughtful heart.”
—Diana Gabaldon, author of the Outlander series

“In this classical frontier adventure, Lori Benton brings to readers a journey of the heart. Burning Sky is a vivid portrait of life in post-Revolutionary War New York. Ms. Benton’s prose is beautifully written, with a romantic edge reminiscent of The Last of the Mohicans and The Deerslayer, but with a bold heroine whose struggles through the harsh realities of life in the wilderness bring her to the realization there is something greater than herself.”
—Rita Gerlach, author of the Daughters of the Potomac series and other inspirational fiction

“There are any number of novelists who can make history come to life, but Lori Benton does so with writing so beautiful that you wish the story would never end. From the first line to the last, her characters and story transported me. Take notice, friends; Lori isn’t just a novelist. She’s an artist. I can’t wait for her next book.”
—Karen Ball, award-winning editor and best-selling author of Shattered Justice

“Lori does an incredible job of using the characters, the setting, and the scene to wash the reader into the story’s flow. Burning Sky is captivating from its very first phrase; I sighed and wept with her characters. I yearned for their well-being—and missed them like old friends when I turned the last page. Lori Benton’s debut novel is one I’ll keep on my shelf to read again. It’s that good.”
—Mesu Andrews, author of Love Amid the Ashes, 2012 ECPA Book of the Year—New Author

“Lori Benton expertly and vividly captures the challenges of life on the American frontier in this remarkable debut novel. An unforgettable story of a young woman’s brave journey to discover not only herself but the God who loves her.”
—Susan Meissner, author of The Girl in the Glass

“Lori Benton’s writing is magnetic, drawing you deeper and deeper into her debut novel Burning Sky. The woman who had been Burning Sky has loved two families and lived two lives, and hasn’t the strength to care anymore. But when she is needed, her heart is stirred and again threatened by loss. Lori Benton is a word-artist, crafting every captivating line to keep you turning the pages of Burning Sky.”
—Mona Hodgson, author of the Sinclair Sisters of Cripple Creek series, the Quilted Heart novellas, and Prairie Song
or support indie stores by buying on
Copyright © 2020 American Booksellers Association