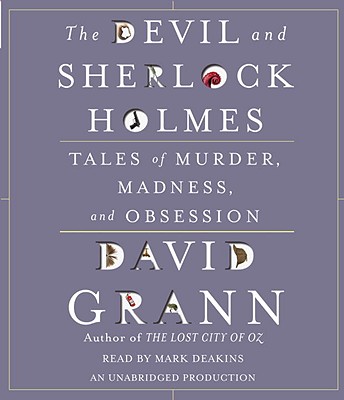 Acclaimed "New Yorker" writer and author of the breakout debut bestseller "The Lost City of Z," David Grann offers a collection of spellbinding narrative journalism.
Whether he's reporting on the infiltration of the murderous Aryan Brotherhood into the U.S. prison system, tracking down a chameleon con artist in Europe, or riding in a cyclone- tossed skiff with a scientist hunting the elusive giant squid, David Grann revels in telling stories that explore the nature of obsession and that piece together true and unforgettable mysteries.
Each of the dozen stories in this collection reveals a hidden and often dangerous world and, like "Into Thin Air" and "The Orchid Thief," pivots around the gravitational pull of obsession and the captivating personalities of those caught in its grip. There is the world's foremost expert on Sherlock Holmes who is found dead in mysterious circumstances; an arson sleuth trying to prove that a man about to be executed is innocent; and sandhogs racing to complete the brutally dangerous job of building New York City's water tunnels before the old system collapses. Throughout, Grann's hypnotic accounts display the power--and often the willful perversity--of the human spirit.
Compulsively readable, "The Devil and Sherlock Holmes" is a brilliant mosaic of ambition, madness, passion, and folly.

DAVID GRANN is a staff writer at "The New Yorker" and author of the bestseller "The Lost City of Z," which has been translated into more than twenty languages. His stories have appeared in many best-American-writing anthologies, and he has written for the N"ew York Times Magazine," the "Atlantic," the "Washington Post," the "Wall Street Journal," and the "New Republic." "From the Hardcover edition."

Praise for The Devil and Sherlock Holmes:
"A gifted storyteller, Grann has a Sherlock Holmesian gift for unearthing facts that are hidden in plain sight, presenting a crystal-clear narrative and letting his compelling cast of characters speak for themselves.....Easily worth the price of admission, a visit to Grann's rogue's gallery is likely to leave you with a sense, at once awful and awesome, of the profound desire we all have for recognition." --Portland Oregonian

"Grann's obsession with how narratives are told is complex and compelling...But it's the basic stories themselves -- bizarre and fascinating, bolstered by exhaustive research -- that make the book so gripping." --TimeOut New York

“At  once a biography, a detective story and wonderfully vivid piece of travel writing . . . suspenseful . . . rollicking . . .Fascinating reads with all the pace and excitement of a movie thriller and all the verisimilitude and detail of firsthand reportage.” —Michiko Kakutani, New York Times

”All the pace of a white-knuckle adventure story . . . What a grand tale it is! . . . Thoroughly researched, vividly told, this is a thrill ride from start to finish.” —Marie Arana, —Washington Post

“Outstanding . . . a powerful narrative, stiff lipped and Victorian at the center, trippy at the edges, as if one of those stern men of Conrad had found himself trapped in a novel by García Márquez.” —Rich Cohen, New York Times Book Review

“V idly alive . . . What makes Mr. Grann's telling of the story so captivating is that he decides not simply to go off in search of yet more relics of our absent hero—but to go off himself in search of the city that Fawcett was looking for so heroically when he suddenly went AWOL.” —Simon Winchester, Wall Street Journal