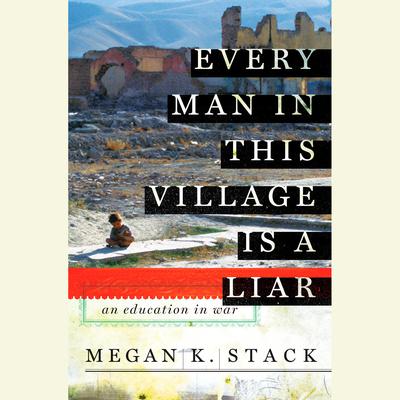 Every Man in This Village is a Liar (Digital Audiobook)

A few weeks after the planes crashed into the World Trade Center on 9/11, journalist Megan K. Stack, a  twenty-five-year-old national correspondent for the Los Angeles Times, was thrust into Afghanistan and Pakistan, dodging gunmen and prodding warlords for information. From there, she traveled to war-ravaged Iraq and Lebanon and other countries scarred by violence, including Israel, Egypt, Libya, and Yemen, witnessing the changes that swept the Muslim world and laboring to tell its stories.

Every Man in This Village Is a Liar is Megan K. Stack’s riveting account of what she saw in the combat zones and beyond. She relates her initial wild excitement and her slow disillusionment as the cost of violence outweighs the elusive promise of freedom and democracy. She reports from under bombardment in Lebanon; records the raw pain of suicide bombings in Israel and Iraq; and, one by one, marks the deaths and disappearances of those she interviews.

Beautiful, savage, and unsettling, Every Man in This Village Is a Liar is a memoir about the wars of the  twenty-first century that readers will long remember.

MEGAN K. STACK has reported on war, terrorism, and political Islam from twenty-two countries since 2001. She was awarded the 2007 Overseas Press Club’s Hal Boyle Award for best newspaper reporting from abroad and was a finalist for the 2007 Pulitzer Prize in international reporting. She is currently the Los Angeles Times Moscow bureau chief.