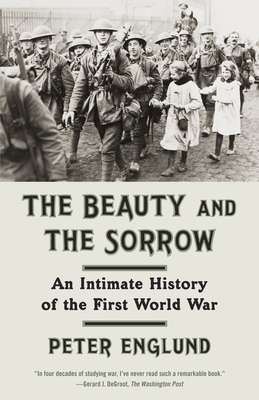 The Beauty and the Sorrow (Paperback)

An Intimate History of the First World War

An intimate narrative history of World War I told through the stories of twenty men and women from around the globe--a powerful, illuminating, heart-rending picture of what the war was really like.

In this masterful book, renowned historian Peter Englund describes this epoch-defining event by weaving together accounts of the average man or woman who experienced it. Drawing on the diaries, journals, and letters of twenty individuals from Belgium, Denmark, France, Great Britain, Germany, Austria, Hungary, Italy, Australia, New Zealand, Russia, Venezuela, and the United States, Englund’s collection of these varied perspectives describes not a course of events but "a world of feeling." Composed in short chapters that move between the home front and the front lines, The Beauty and Sorrow brings to life these twenty particular people and lets them speak for all who were shaped in some way by the War, but whose voices have remained unheard.

Peter Englund received a Ph.D. in history at the University of Uppsala in Sweden. He has been given a number of literary prizes in his home country, including the most famous one, the August. In 2002, he was elected to the Swedish Academy (who awards the Nobel Prize in Literature), and in 2008 was appointed its new Permanent Secretary. He has also worked as a war correspondent, in the Balkans, Afghanistan and Iraq.


Praise For The Beauty and the Sorrow: An Intimate History of the First World War…

Praise for The Beauty and the Sorrow:

"They call them the lost generation, but you'll find their story here."
—New York Post

"Intense and bighearted. . . . The accounts of [these] lives can be terrifying or stirring, but are most fully alive in Englund's accumulation of small moments, stray details."
—The New York Times

"History in the raw, an unconventional look at the war that did so much to shape the last century. . . . Englund has uncovered the stories of a myriad of fascinating characters."
—The Boston Globe

“An unforgettable and unprecedented view of the war as seen by 20 people who took part in it but, were it not for Englund’s remarkable job of unearthing and arranging their journals, letters, and memoirs, would probably have remained forever faceless, forgotten by time. . . . Lets us in on astonishing details of the war one would be hard-pressed to find elsewhere. . . . Shatters the mold . . . A beautiful tribute.”
—San Francisco Chronicle

“Conveys the war’s complexity better than any of the grand histories so far written.”
—The Washington Post

“Whether considered as history or as literature—it is, of course, both—The Beauty and the Sorrow is radically original in form and epic in scope.”
—Geoff Dyer

“A brilliant feat of retrospective journalism. . . . Englund’s deft collation provides insights into more than the carnage. . . . This book fleshes out the grim statistics of the Great War. . . . The eloquence of everyday participants will link the reader to the era when the origins of the ensuing century’s conflicts became apparent.”
—Publishers Weekly (starred)

“An exquisite book. . . . There are adventures and battles, of course, but also many moments of quiet contemplation with closely observed details of street scenes, restaurants, railway stations, and deserted battlefields. . . . By turns pithy, lyrical, colorful, poignant, and endlessly absorbing.”
—Kirkus Reviews (starred)

“A wonderfully wide and rich mosaic of personal experience from the First World War.”
—Antony Beevor, author of Stalingrad and D-Day: The Battle for Normandy

“Englund covers a lot of ground in The Beauty and the Sorrow, geographically, topically, and in point of view. . . . He succeeds in his goal to humanize the war.”
—Dallas Morning News

“Peter Englund is one of the finest writers of our time on the tactics, the killing and the psychology of war. In The Beauty and the Sorrow he superbly and humanely brings to life all the tragedy, chaos, death and gunsmoke of battle.”
—Simon Sebag Montefiore, author of Stalin and Young Stalin

“Powerful and compelling . . . Of the many books about the First World War this is among the most strikingly original. . . . Almost every page of Englund’s book is fresh and revelatory.”
—Daily Express (UK)

“A literary as well as a historical achievement.”
—The Guardian (UK)

“These lives are anything but ordinary, and the stories are absolutely riveting. . . . A fresh, varied, thoroughly convincing picture of the war. . . . There are some wonderful details. . . . Englund has chosen his voices with great care, and the resulting picture of the war in the round, with all its sorrows but also its joys, is made all the more vivid by the eloquent translation from the Swedish by Peter Graves.”
—The Telegraph (UK)

“Englund frees individual experience from the collective cloak of history and geography [in] this extraordinary book. . . . The details build like a symphony.”
—Mail on Sunday (UK)

“[There are] hundreds of eerie, moving, upsetting, and surprising incidents from the First World War within this extraordinary book. . . . Like a great novel, The Beauty and the Sorrow manages to be both more universal and more particular [than other books on WWI]. Peter Englund frees individual experience from the collective cloak of history and geography. . . . The details build like a symphony. . . . Englund writes with a calm clarity, beautifully conveyed by his translator.”
—Mail on Sunday (5 stars, UK)

“Anthologies of war reminiscences are often lazy stuff, mere compilations of extracted passages from diaries and letters. . . . [But] Englund’s choice of witnesses and his use of their material are admirably judged. This is an anthology well above the common run. . . . This is a book about men and women living at the outer edge of human experience.”
—Sunday Times (UK)